In this story I am creating, there is an airborne infantry that specializes in disabling small ships, rapid reaponse deployment, and supporting ground forces with a large number of them. For reference they are called the Hawks.

I am a little at a loss to how a concept I came up with would work. With their fast flying and small amount of time to aim, I thought of a solution. A micro-missile rifle.

I understand that a missile has blowback, and that it's explosive yield would be a bit small if fitted into a rifle form.

You might say "why not just make a grenade launcher, or a rifle with explosive rounds?" Well what would be helpful about using Micro missiles? Would the yield be great against armor? Is it possible to strafe an entire area in a quick succession?

Would the ammunition hamper the flight capabilities of the Hawks?

Edit: The goal of the weapon, is to be able to consistently hit targets at high speeds with a minimal amount of time required to aim. Also to create a versatile weapon against aircraft, armor, and infantry. A weapon that would also enable the Hawk to still fly.

Its already a thing.

Its called the Gyrojet.

The Gyrojet is a family of unique firearms developed in the 1960s named for the method of gyroscopically stabilizing its projectiles. Rather than inert bullets, Gyrojets fire small rockets called Microjets which have little recoil and do not require a heavy barrel or chamber to resist the pressure of the combustion gases. Velocity on leaving the tube was very low, but increased to around 1,250 feet per second (380 m/s) at 30 feet (9.1 m). The result is a very lightweight weapon.

Even thought the gyrojet had issues, they would most likely be solved given serious funding:

Versions of the Gyrojet that were tested were inaccurate, cumbersome, slow loading, and unreliable. At best, a 1% failure rate was suggested

The main advantages that I see with gyrojets are lightweight as mentioned above, and that they could potentially carry avionics that allow the user to guide the missiles, especially given compact modern computers. However. the gun had very little energy at close ranges and the small size of the weapon, though given that the users will be flying, close range engagements won't be very common.

Is your mini missile a rocket propelled grenade? 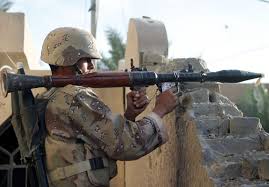 I envision your hawks having a quiver full of these little rockets. Sort of like the archer superheroes, not every rocket is the same. There would be shrapnel antipersonnel rockets, shaped charge antitank rockets, white phosphorus rockets etc.

How to distinguish these from generic old RPGs? I am digging the idea of rocket powered arrows. The flying archer would shoot and then the rocket turn on a second later, propelling the explosive arrow forward.

The key is to turn an RPG or Gyrojet or other missile into a smart weapon.

This really shouldn't be much different from the way a much larger missile might be fired from a fighter jet today. The difference is miniaturization. But I think a Raspberry Pi would be powerful enough to handle the computations involved, so the only big (physical size) additions to an RPG would be some sort of additional inflight steering mechanism controlled by the onboard computer.

Using guided mini-missiles might be a good idea. There are a few considerations to take into account though.

Rocket-propelled grenades are pretty much bullet-fast. At that speed, there isn't much time to adjust the path of the missile as you're firing in close quarters. Planes dodging missiles is actually done IRL (though not at all like is depicted in the media) and as closer ranges with less time a miss would be guaranteed.

Have you heard a story from a guy who fired an RPG from inside a room? No, you haven't. When you launch an RPG or similar, there's a pressure wave from the back of the launcher called backblast, and it can kill people behind it. When you fire prone, you need to put it "sideways" across your shoulders so you don't wreck your legs.

And if fired in a confined space, the reflection of the backblast can kill the user.

Fortunately, there's a solution for both of these problems:

Make the micro-missiles slow. They launch out at maybe as fast as a fastball in baseball, so there's much less of an initial burst of air pressure to cause backblast, and it gives your fins more time to correct the speed. In addition, less power is needed to sustain a slower speed so that means a smaller rocket can be used.

This isn't too much of a concern. 25 mm grenades are a thing and your missiles, if the same size, will still pack a lethal punch. Note that you aren't going to have as many rounds as normal - the 25mm grenades for the XM25 airburst launcher came in 5-shot mags and your soldiers probably can't carry more mags than they could for other weapons with higher capacity.

The most common idea with 25mm grenades is to use them to airburst around corners. You aren't going to get more of a yield than a grenade from these, since they'll use the same explosive as a grenade.

That said, you can specialize the payload for different targets. You can make anti-armor grenades for launchers, so your Hawks could use those against enemy armor.

As for taking out something like a helicopter, an anti-armor missile against the engine should work.

Something like a jet fighter, though... that's going to be hard simply because they're moving very fast. Good timing will be needed have the missile in the area where the plane will be, and you have to make sure that the plane doesn't just dodge. Unlikely, to say the least.

Given you are looking at some sort of "all aspect" missile capable of taking out ground and air targets, there is one in service which might fit the bill: the Starstreak

Currently in service, it is a lightweight, Mach 4, laser guided anti aircraft missile. The operator acquires the target and launches the missile. While the operator keeps the cross hairs on the target, corrections are sent to the missile via laser, making the missile essentially unjammable. Close to impact, the proximity fuse releases 3 tungsten "darts", providing a larger area coverage and virtually guaranteeing impact on the target.

Starstreak has a range of about 6000m, and has also been tested against ground targets, where the impact is similar to being struck by a 40mm cannon shell. This is likely enough to destroy or severely damage anything less than a full MBT, and will certainly damage any smaller surface vessels.

The best part about Starstreak is it is very versatile. It can be man portable, or carried on small vehicles. It is also small enough that a vehicle can carry a reasonable number of reloads inside as well. 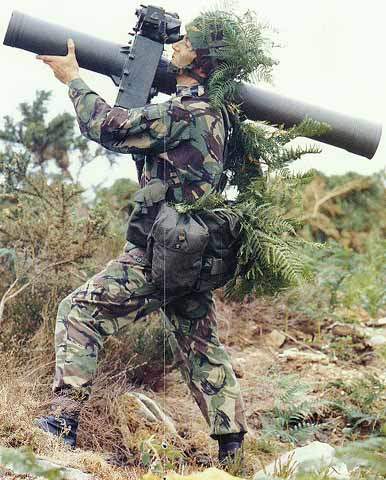 Starstreak as a MANPADS 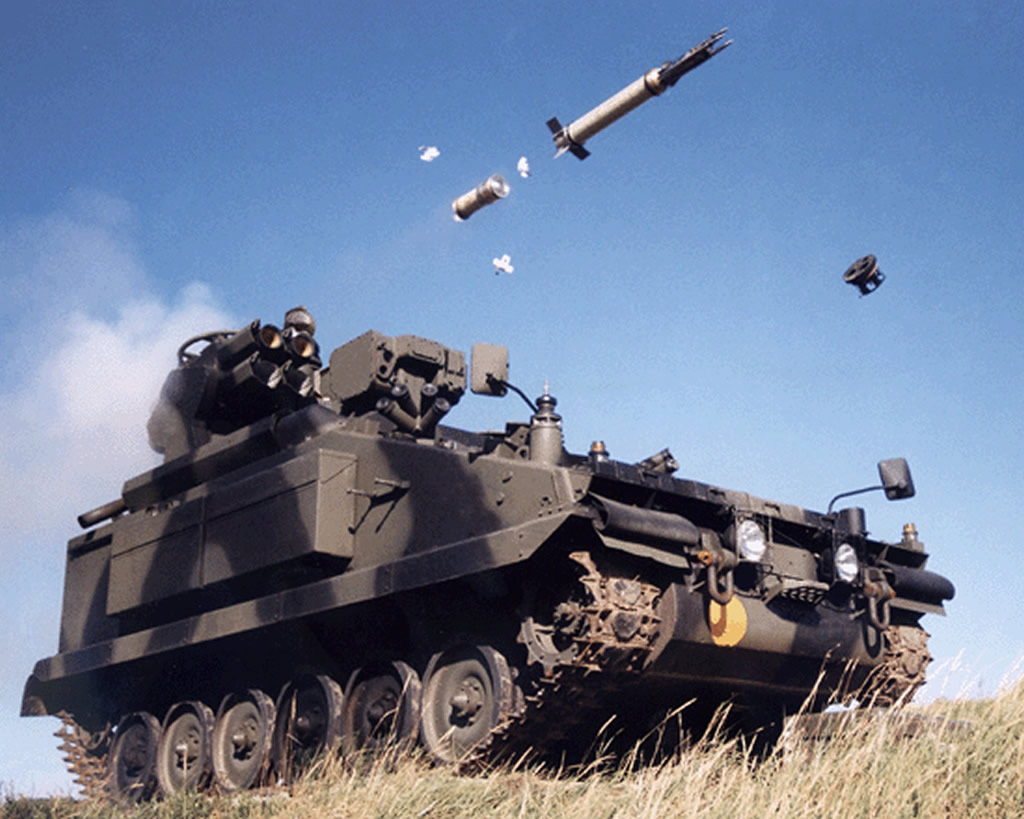 Starstreak lanched from an 8 round luncher on a British AFV. There is room for an additional 12 rounds inside

Starstreak has been offered as a ship mounted SAM and also as a helicopter mounted AAM, so it is incredibly versatile. While the main injury mechanism is 3 hypervelocity "darts", there is no reason that the missile could not be ordered with a single unitary warhead, or an explosive warhead.

This is larger than a rifle or even shoulder launched anti tank weapon like an AT-4 or RPG-29, but this is the price for being able to accelerate to Mach 4, have a 6000m range and being virtually unjammable by conventional countermeasures. The missile is all aspect (usable against land, sea and air targets), and can also be mounted or carried by individual soldiers, vehicles, ships and aircraft (helicopters and large enough UCAVs). A star streak like weapon provides the man portable firepower for attacking hard or difficult targets.

Not the answer you're looking for? Browse other questions tagged military firearms or ask your own question.

16
How would a lack of smokeless propellant affect WW1?
5
Recoilless Rifles vs Bazookas against non Mechanical Targets