How fuel-efficient are airships?

I'm putting together a steampunk novel, and I'm trying to plot out the course the main characters are taking.

Let's say I have a small airship, meant for a crew of half a dozen to a dozen. Let's say it uses helium gas. Let's say the cabin is built like a pleasure yacht, about 50 feet long -- not a military size or anything like that. Let's say the propulsion is a steam-based engine that uses coal for fuel -- if it's not feasible, I'm not opposed to introducing a magical fuel source, but if I don't have to I'd like to avoid it. I'd like it to be lighter-than-air, unless that's not physically possible. Propulsion should be entirely mechanical; I want fuel to be a constraining factor for plot reasons.

How far it can travel before needing to refuel is therefore a function of how fuel-efficient it is, as well as how much helium it needs to carry the weight of the fuel, right? How far would be a reasonable range of travel for a ship this size before it has to make a fuel stop?

A 50' gondola is pretty large. It's about the size of the gondola on the Graf Zeppelin.

The use of coal for fuel is not completely impractical, but it does create problems with the change in weight as the fuel is burned. The Graf Zeppelin used Blau Gas (about as dense as regular air) to power its engines to avoid this problem.

Unfortunately I can't find the values for Blau gas, but it's quite similar to propane, so I'll be using the value of 50.3 MJ/kg for propane and the 29 MJ/kg for coal.

From this we can see that this Zeppelin made about 5 meters per megajoule. It's not very fair to assume the same conversion efficiency for coal, but if we did, the Zeppelin could travel about 9,500 km with 65,000 kg of coal. More likely, only 60% of the coal could be converted to energy for use in propulsion, giving a slightly more realistic range of 5,700 km at 0.087 km/kg. There are a lot of stacked assumptions here, so we can be generous and round that off to about 90 meters per kilogram of coal.

The water used for steam generation could be from the same reservoir used as ballast, so that shouldn't be too different. The steam will need to be recondensed to preserve it for ballast.

As you can see here it would probably be a much better idea to simply use the original fuel for some steam engines rather than coal. You can then take the original efficiency of any airship you like and approximately halve it to convert it to steam power.

It depends on how you fly it.

If you fly an airship like an airplane, you'll end up with efficiencies similar to those described by several of the other answers here. However, there are two factors that can be used in an airship to drastically increase the distance than can be travelled before needing to refuel:

These two factors allow us to do two things: use prevailing wind currents to move about and glide under gravity.

If your airships are willing to route themselves based on air currents, they can use these to float about without needing to consume power. For example, airships travelling between the US and Europe can use the trade winds when bound for the Americas and the prevailing westerlies when heading to Europe.

Of course, as you can see from a map of the Earth's wind patterns, these winds don't point directly from east to west: 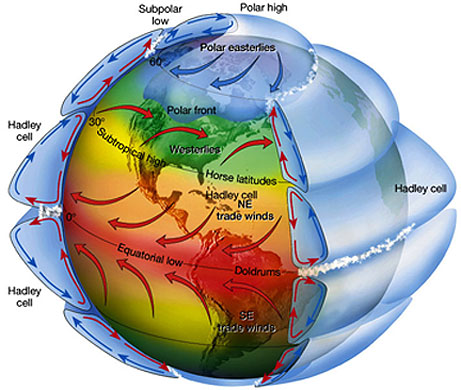 This means we don't quite have a free ride, but we can still profit from using the winds, so long as the winds point at less than a 45 degree angle away from your desired destination. (At this angle, the amount of travelling you need to do to stay on course would be equal to the amount that the wind would push you.) The fuel savings from following the winds in this manner depend on wind angle. If your winds point away from your destination at an angle of 10 degrees, for example, you'll only need 1/8th the fuel you would need in still air.

If you want your airships to make there and back trips, you'll then have to fly from one air band to the other, or else break your airship down and ship it by train (or by ship) to its new takeoff destination. Of course, you can avoid this if you just keep going the same direction. The world is round, so you'll eventually be able to get back to where you started without needing to fight against the wind.

If our airships are shaped in such a way as to be capable of generating a horizontal force from a vertical one applied to the airship by the surrounding air, i.e. if they have somewhat airfoil-like shapes, they'll be able to generate forward motion based on gliding. An airship can 'glide' by falling either up or down by changing its density, and then converting that falling motion to a forward motion using a wing. In many cases, the body of the aircraft itself can form the wing in what's commonly referred to as a hybrid airship.

In the simplest case, a moored airship can be filled with helium to a point where it is buoyant and then released, at which point it will float upwards (while gliding forwards) until it becomes neutrally buoyant. Upon reaching the apex of its climb, the aircraft can then begin releasing excess gas to begin its descent, again gliding forwards based on aerodynamic forces. Under the sea, this same concept has been used successfully to create underwater gliders.

While this sort of setup would only allow a limited distance flight (based on the amount of helium that could be safely released without crashing), it wouldn't require any fuel whatsoever. For longer flights, airships could rely on a steam-powered compressor to change their volume, and consequently their density. This, or using thermals to gain lift, could allow an airship to extend its travel times significantly, without relying on local wind patterns.

Besides the already mentioned issues of traveling with or against the wind I will try to cover the issue of the range based on coal as fuel by comparison to the Zeppelin.

I assume that the desired cabin length of about 50 ft requires a airship of dimensions comparable to one of the early post-WW I passenger models: the LZ 120. The ship has a length of 121 m and a range of 1,700 km running on its four Maybach engines at top speed (about 130 km/h). It has an empty weight of 13,646 kg and can lift up to 9,593 kg. Skip for the moment that it uses Hydrogen instead of Helium, which however increases its lift capacity.

So, running 1,700 km at 130 km/h means about 13 hours of traveling. Unfortunately I cannot find any references to the amount of fuel it is carrying. From this page I therefore take 250 kg/h of fuel consumption for the LZ127 (a newer model). Using this as a very rough estimate shows a fuel load of 3,250 kg which sounds quite reasonable and leaves about 6,000 kg of lift capacity for passengers and cargo.

The LZ120 runs on gasoline, say with a heat of combustion of 20,000 BTU/lb. Coal on the other hand offers 8,000 (Lignite) and 14,000 (Anthracite). Which is unfortunate as it offers less energy per weight the airship has to carry around. Let's also assume that the LZ120's engines have an efficieny of 30% (my estimate, could be even lower) while the steam-based engine will be at 15% (which is quite high for a steam engine). This also doubles the weight of fuel.

These facts alone reduce the range of a coal-fueled steam-propulsed airship to 35% of a gasoline driven one. The resulting range would be about 600 km.

A word of warning though: these simplified calculations do not take the additional weight of the engines themselves into account and the additional water that will be necessary to operate a steam engine. Those could be really a deal-breaker.

I would say it will depend of the prevailing wings and the route... since the airship just "floats", the wind moves it where it wants (like a ballon).

At high attitudes, wind stream are quite constant (in fact, commercial airplanes may have different routes from A to B than from B to A to benefit from that). Make the captain and "old air wolf" who knows how the air currents behave and give him time to plot the more economical route, it can be left floating until it must dock due to lack of food, water, or fuel for heating.

Alternatively, make it that it must get "ASAP" to a city, and the shortest route is against the wind, and it will consume more power than a suburban.

Not the answer you're looking for? Browse other questions tagged technology steampunk airships or ask your own question.

23
What would make airships viable economically?

31
What geographic characteristics for a world would be needed/be most beneficial for airships to be a common mode of transportation?
33
How can I create a map of an underground city?
9
Airship Aircraft Carrier Dimensions
12
What are the consequences of using limited anti-gravity for steampunk-style airships?
5
What do airships look like in the 1800s?
13
Smallest possible size for a manned airship
18
Comfortable way of entering and exiting Airships anywhere at will
8
How could a steampunk zeppelin navigate space?
7
How functional/versatile would airships utilizing perfect-vacuum-balloons be?