in my world, there are human-like creatures who live underwater and in warm mountains that they carved into colonies like Petra, Jordan where structures were built into mountainsides but more like caves.

because they live in water they are covered in a protective substance like a firm 'slime' almost solid. to produce offspring a male and female must 'hug' where every part of the creature connects. the 'slime' softens and combines with the others slime to make a 'baby'.

Does this make sense? would this be possible?

You could develop this into a quite believable reproduction mechanism.

In complex life forms on earth, egg and sperm are formed in a process called Meiosis that reduces the chromosomes inside a cell. 2 of those haploid cells combined have one complete set of chromosomes and create a baby.

If your humanoids produce haploid cells on the outer layer of their skin, they become part of the slime surrounding them. Combine 2 sets of slime to combine haploid cells (like egg and sperm) and you have a really big mass of diploid (fertilized) cells that could form into an embryo.

There needs to be a catalyst that prompts two cells of different individuals to combine into one cell to rule out self-insamination.

One problem might be how to determine which cells should form which organ. If some cells in the middle decide to become an arm while some cells on the exterior decide to become a heart, the embryo won't be able to survive. It would probably take some time and hormones and whatnot to control the development of the embryo. It would also be best to keep the slime/embryo save in a womb-like structure during this process. The slime needs time to settle or dissipate and let the cells combine into a living organism.

Since slime dissolves into water, your humanoids shouldn't produce haploid cells all the time. That would be a waste of energy and not viable from a evolutionary point of view. It's far more believable for them to have a hormonal cycle or breeding season in which the haploid cells are released into the slime.

And then something happens...

I've spent many a time in engineering meetings where a small chunk of white board sported a box with the words "magic happens here" inside. Those small chunks of white board usually represent man-years of work. In your case, I suspect it's a lot less. something along the lines of "as the slime combines it stiffens and finally hardens, slipping into a convenient pocket on one of the creatures where it bakes at 375° for a couple of months until the cutest tadpole you've ever seen pops out, wondering where it's iPad is."

So, you're missing some reasonably important parts of the process, but the gist is there — and I'm completely happy with it.

Most of this process has been available to hydras for millions of years. It just needs a bit of tweaking. I don't have time right now for a full answer but may return later. 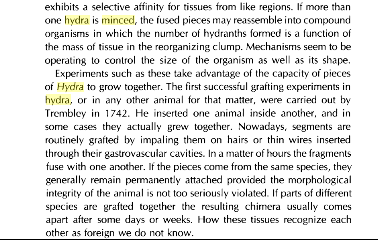 from Principles of Regeneration By Richard J. Goss

6
How would shell-headed children retract their bodies?
16
Is a four armed arboreal reptile as described viable?
9
How do wraiths control their bodies?
4
How could a nautilus work together with a man o' war?
4
Could this centaur anatomy work and fit together?
3
How is the Alien Parasite's Empire in my Story going to Justify Bans on Clone Bodies for the Parasites?