What would make radio transmission unfeasible on a planet?

I am looking for a good reason to make radio communications on a planetary scale unfeasible or impossible. Short-range use is acceptable, but no transmissions should make it to orbit or over the horizon line. Hints on specific type and features of an atmospheres are welcome, as well as scenarios that involve no atmosphere.

Edit concerning radio communications between to and from the planet, as dealt with in a different question: the important part would be that no transmissions would be able to leave the planet and reach orbit.

Edit concerning technologies involved generating "radio" transmissions: i am most interested in the conditions that would make atmospheric or above-surface transmission of radio signals impossible/not worth the effort. i am fine with the idea of using crust-resonance, lasers etc for communications.

To keep the signals from reaching space you would need a charged upper atmosphere that is strong enough to block most signals. This may result in some aurora borealis if my understanding is correct, but it's pretty set dressing at least.

The problem is that radio waves can travel through the ground too, so if you want to limit your communications range you need to alter the planets surface composition. Ever hear of Aokigahara? It's the place where Logan Paul screwed over his whole career. Well that place blocks cell signals because of the hill's rich iron composition. Make your planet rich in iron and that will fix most of your problems.

However, the signal might still bounce between the ground and atmosphere and the high charge might cause nothing but radio static everywhere, so some hand waving or contrivium may be in order.

First, before people start yelling "solar storms!" just bear in mind that even the craziest geomagnetic phenomena might not be effective against lower frequencies traveling long distances.

As your question implies, you are already aware that some forms of radio waves will reach distances beyond the line-of-sight of the transmitter because of how they "bounce" off the ionosphere. But they can also travel long distances as ground waves. This Wikipedia article has some good info. So, it may be best to think of this question in two parts:

No transmissions should make it to orbit...

Generally speaking, in theory, I suppose if you had a ridiculously ionized layer of atmosphere, it could conceivably block most if not all signals from reaching orbit, so that solves half of your problem. (The science is a bit less simple than I'm making it sound, but that's the basic idea.) But again, the frequencies involved will affect this.

Additionally, the composition of the atmosphere itself can affect signal propagation. Altering the content of the various atmospheric gases could give you the effects you're looking for; different gases react differently to EM. Of course, too much alteration and the air will become unbreathable, or air pressure will become too high, and people will need EV suits. I recommend visiting the Physics or Space Exploration Stack Exchange sites for more info in these regards.

...or over the horizon line.

I would consider using terrain as a way to limit your range. Bodies of water and rugged, mountainous landscapes absorb a lot of EM radiation. Volcanic activity producing high amounts of ash can help, but anything short of a cataclysmic eruption would probably not cause much interference for long, and certainly not over a wide area. So, probably too unreliable for you to count on.

Note also that some weather can actually work against you and improve the signal range.

What would make radio transmission unfeasible on a planet? 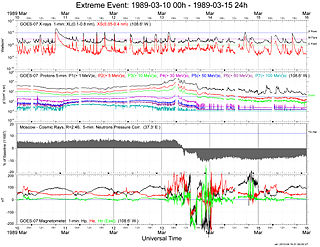 A mars sized planet would be more difficult for radio because of the enhanced curvature of the surface. A planet with an atmosphere thick with metallic dust also bad.. especially if that meant frequent electrical storms. A planet with a weak magnetic field.. allowing solar particles to penetrate the atmosphere.. basically mars.. with a slightly thicker atmosphere.

This may be considered cheating, but... Make the atmosphere highly noxious.

We take it for granted that our planet has a nice atmosphere and significant protections from solar UV radiation. If the ozone never formed, UV would still be so intense that we would still be stuck in the oceans. Once you're deep enough underwater, the distance radio transmissions can travel is significantly reduced (more so for some frequencies in the low GHz range than others). Long-range transmission would thus be made infeasible not because the signals would be blocked, but because building transmitters in such an environment would be dangerous. The same thing can be done without resorting to an underwater civilization. Imagine a species like ourselves that live on Venus. We would need to live in underground and actively cooled tunnels to avoid the lethal combinations of pressure, acidity, and heat that plague the surface. Transmitters would not survive for much longer either.

Not the answer you're looking for? Browse other questions tagged atmosphere communication radio or ask your own question.

28
Why might radios not be effective in a post-apocalyptic world?
6
Can any astronomical phenomenon block/scramble all radio signals from a planet, without making it completely uninhabitable?

7
What would change with transmission of knowledge and ability through touch?
7
Would it be possible to build helicopters without knowledge of radio transmission technology?
6
Given present-day Earth as we know it, how could I fake a radio transmission as coming from a distant star?
3
What forces would make leaving a planet impossible?
4
What good is a radio after a nuclear apocalypse?
20
Why would radio signals be invented/transmitted when communication is not an issue?
11
How can we make a one-way radio?
4
How could a planet have an atmosphere that lets visible light through but blocks all radio waves