Feasibility of an endothermic gun

I had the idea of a "void weapon", which would "generate cold" rather than heat on triggering. All the air from the chamber would be sucked out (thus "creating cold") and on firing, it would open the chamber: the difference of pressure would push the bullet out. However I'm not sure it would be powerful enough or even feasible.

I was wondering whether an endothermic weapon was possible. If so, how would it work ?

An example of this is literally called freeze spray (used to make animal waste more solid among other things). These typically use some form of fluorocarbon gas.

So if you could compress a gas enough and used the release of pressure to propel your projectile, you would end up with cold steam pouring out of the chamber after every shot.

Loss of pressure after each shot, may result in diminishing returns in terms of kinetic energy, unless each shot was backed with it's own pressurized container (which was said to be out of scope of the question).

Air powered rifles can be deadly. The Girandoni air rifle was used by the Austrian military as far back as 1780.

So with the right gas under the right pressure, you should end up with an endothermic reaction as part of the firing process.

The problem is that the most pressure this could produce is atmospheric pressure.

Let us imagine your endothermic BB gun. You have an awesome (here unspecified) endothermic reaction that turns the air in your vacuum chamber into liquid. Let us assume that after the reaction this cold chamber contains a perfect vacuum so external atmospheric pressure squeezes it down from the outside against the spring.. When you pull the trigger and open the chamber, ambient air at atmospheric pressure will rush in to the vacuum chamber. No longer squeezed down externally, the spring will uncoil, snapping the chamber back to full size and propelling the BB out.

Atmospheric pressure is 15 psi. A BB gun running on a CO2 cartridge has 900 psi. You will fire your BB. It will not go far.

Ralphie - be careful with the endothermic BB gun. You could still put your eye out!

thinking further, maybe you could have a very large vacuum chamber and gears like a bicycle. You would gear up the work done by that volume of atmosphere rushing in and moving a large piston to move a very small piston forward much faster. This becomes a single stroke vacuum engine which is legitimate. The gears would be on the outside. Don't get your cuff caught in them!

Really any compressed gas gun works. When fired the decompressing gas drastically lowers the temprature. Filling the reservoir is very exothermic that gets dissipated quite quickly until it reaches ambient temperature, it may not even be done in the gun itself, meaning when the weapon is actually fired it ends up very cold. Hunting air rifles exist so lethality is not an issue. Even better the technology has existed for almost a hundred years.

The rapid drop in temprature even gives you a nice smoke effect from condensation. 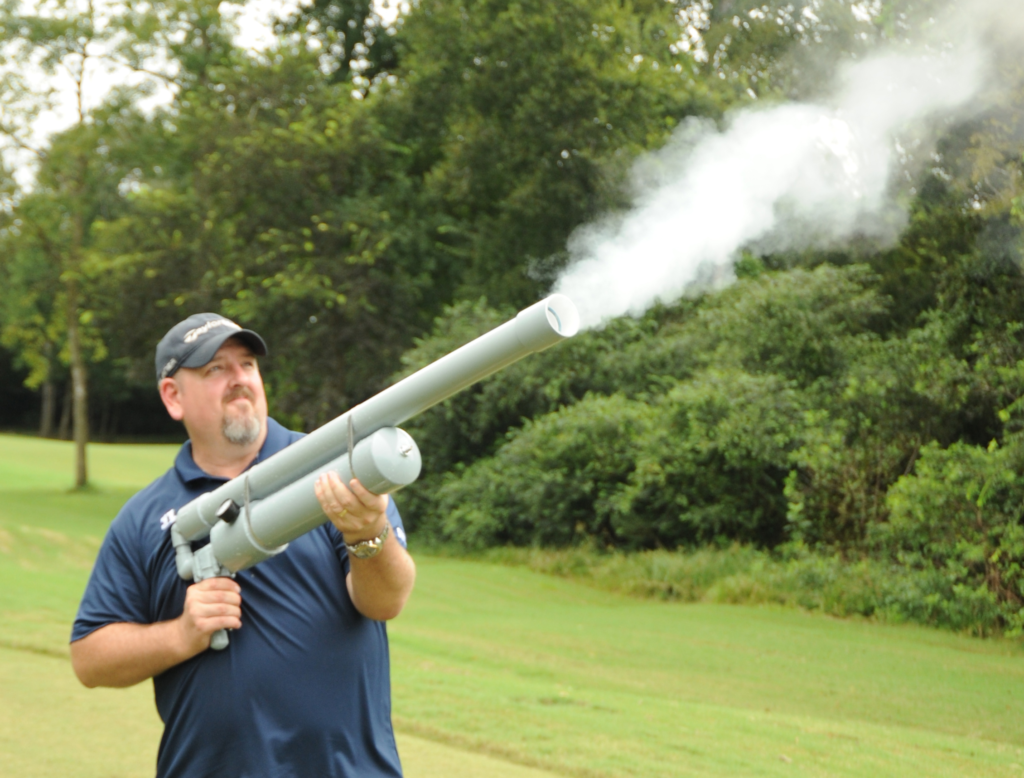 I'm going to go with a bi-metallic crossbow. The stock of the crossbow holds a vacuum canister full of Liquid Nitrogen with a valve that will inject the liquid into several small tubes in the bow arms when a secondary trigger is pulled.

To load, while warm, the crossbow has the bowstring pulled back and a bolt loaded as normal. When ready to fire, the secondary trigger is pulled flooding the bow arms with LN2 drastically reducing their temperature and due to interactions between the two metals drastically increase the strain as the bow arms try and bend forward increasing the throw strength of the crossbow.

After firing, small fins on the bow arms help them to warm back up to reduce the pull weight, assisting with reloading, while a vent dumps the expanding N2 gases from the arms.

Since you took hard-science off, I'll throw two options out there.

I may be overlooking something in the restrictions, since this answer hasn't already been given, but why not just combine a (high tech, insulated and over-engineered) water pistol with a tank of liquid nitrogen? (sort of an anti-flamethrower)

Liquefied gas tends to be kept under high pressure anyway - a small quanta of Liquid Nitrogen is diverted to the Firing chamber, and additional pressure is applied so that when the front aperture opens the 'shot' is propelled out, much like an Archerfish, and freezes the target

The chamber is then flushed and reset for the next round - any excess Liquid Nitrogen evaporating would cause the barrel to steam.

For bonus fun, replace the Liquid Nitrogen with Liquid Oxygen and add a pulsed IR laser to ignite the oxygen-rich target - first you put them on ice, and then you set them on fire. We'll call it "Freezer Burn"

ok lets have a chamber of gas, with the bullet at the end (opposite to conventional guns). Endohandwaving instantly freezes the gas in the the chamber to a liquid, pulling the bullet back into the chamber. This is the gun "cocked" and leaving it cocked for long will start to show ice/frost forming on the gun. On trigger, endohandwaving stops, and the liquid rushes back into gas form at high speed, pushing the bullet out.

It's kind of just a fancy air rifle, but compressing the gas into cool liquid within the chamber, instead of having a separate canister of compressed gas.

Dean Ing, in Wild Country, wrote about a "chiller". It was a short-range gun that, among other things, included a "cold gas" ampoule in each cartridge, which was used (by mixing in the suppressor) to quench the powder gas from the otherwise conventional cartridge (and also to lock the gun onto the trigger finger of an unauthorized user).

In practice, the cartridge that could do this would have to use a refrigerant (R-134, for instance, though that has too low pressure), have a cold gas ampoule larger than a conventional cartridge, and carry the gas at extreme pressure (to compete with the pressure at the muzzle during the shot). For hand-waving cool factor, however, it worked fairly well.

The only way to use vacuum to propel a projectile is to generate the vacuum in front of the projectile and let atmospheric pressure do the pushing, accelerating it. More or less what we do when we use a straw to drink from a glass.

The problem with this approach is that the pressure gap between vacuum and atmosphere is a flimsy 1 bar, which compared to the instantaneous pressure generated by conventional projectile is really low.

On top of that you would need a really precise mechanism to seal the barrel and open it right when the projectile is next to its end, else the pressure wave of the entering air would reduce its velocity.

You already see that this approach is inefficient and complicated, but in principle possible.

Not the answer you're looking for? Browse other questions tagged science-based physics weapons .

1
Supernova Rifle
54
Are endothermic bombs possible?
24
How to build a Blood Gun?
6
Short-term Miniature black hole weapon and its effects
60
Does a grenade kill you the same way a gun does?
6
How to redesign modern weapons in order to make their indefinite storage easy?
26
Justifying the use of directed energy weapons
7
Is my plasma weapon design any good?
1
What organs or modifications are need for a biological creature to develop lethal force as a poop machine gun?