Is it possible to place a permanent probe on Uranus?

Before anyone points the finger saying this is a tasteless joke, there are some actual good reasons to pick that specific planet for exploration among the giants in our solar system:

Now that we have stablished the seriousness of the question, I really want to probe Uranus to get a feeling of what it's like. I know no gas or ice giant has a solid surface, but according to the wiki

The ice mantle is not in fact composed of ice in the conventional sense, but of a hot and dense fluid consisting of water, ammonia and other volatiles. This fluid, which has a high electrical conductivity, is sometimes called a water–ammonia ocean.

Very-high-pressure experiments at the Lawrence Livermore National Laboratory suggest that the base of the mantle may comprise an ocean of liquid diamond, with floating solid 'diamond-bergs'.

That got me thinking: maybe we could build a submarine or floating probe to explore Uranus. Unlike the probes that were sent to their doom into Saturn and Jupiter this one could last as long as it can stay afloat.

However, the same wiki also says:

The gaseous atmosphere gradually transitions into the internal liquid layers.

This is in line with a passage from the wiki on Jupiter:

In this state, there are no distinct liquid and gas phases—hydrogen is said to be in a supercritical fluid state. It is convenient to treat hydrogen as gas in the upper layer extending downward from the cloud layer to a depth of about 1,000 km, and as liquid in deeper layers. Physically, there is no clear boundary.

This is surrounded by a thicker liquid metallic hydrogen layer, followed by a liquid layer of helium-saturated molecular hydrogen that gradually transitions to a gas with increasing altitude.

I cannot get my head around this. On Earth, if you fill a container with gas and liquids, the gas stays on top and the liquid below, with a clear boundary. Even if the liquid is boiling or if the gas is condensing, we see distinct phases.

So, supposing we go for Uranus and send a splasher probe. Handwaving the problems related to getting it to resist the immense pressures and the low temperatures, would the probe be able to stay afloat - or at least keep a depth within a range - at some altitude?

First, the transition from the gas phase to a supercritical fluid is gradual. Think of the gas gradually and slowly getting denser and denser, with the gas molecules getting closer and closer. All gradually and slowly. After some time, you are inside a liquid!

Most people are not familiar to supercritical fluids because that is a phenomena that happens with high pressures and high temperatures that Average Joe would never see in his all life.

Now focusing in Uranus, I don't think that what you are trying to achieve is possible.

Using a balloon, you might float in the upper atmosphere, but since you want to reach deep layers, this is not what you want to.

Your better bet would be to build its hull out of materials like hexagonal-lattice diamond, boron nitride, iridium-tungsten and graphene. Everything should be perfect and free from topological defects. Even with that, it is still very likely to fail and implode.

However, let's suppose that you built a submarine capable to stand the pressure and the temperature.

Further, down to 1000 km deep, it would be too far to be capable of establishing any communication. Since a submarine is too heavy to float to the upper atmospheric layers, it is sorta of doomed to stay there forever.

Communications are possible by sending those physical packages up and down carrying some data with them, which is slow but works. Another way to establish communication would be to have a lot of different submarine/balloons floating at different layers one above the other spaced by say 1 km. Every vehicle in those intermediary layers are gradually balloon-like or submarine-like accordingly to the intended layer. Every vehicle is then responsible for sending, receiving and relaying radio signals between its deeper and shallower neighbors, possibly switching radio frequencies when appropriate.

Pressure is important here. It's both a problem and a solution.

As expected in giant planets, the atmospheric pressure and temperature change with altitude and depth. By the time you get to the base of the troposphere, pressures are at about ~100 bars, which is slightly higher than the atmospheric pressure on the surface of Venus (93 bars). If you're wondering how strong that is, consider that the Venera series of probes in the 1970s survived those conditions for about 50-55 minutes. Vega 2, the last lander we sent to Venus (in the 1980s), didn't do any better. Temperature was also a major contributor to the failures, as was the atmospheric composition, so a probe to Uranus certainly wouldn't face quite as hostile an environment. That said, the high pressure would still be problematic. 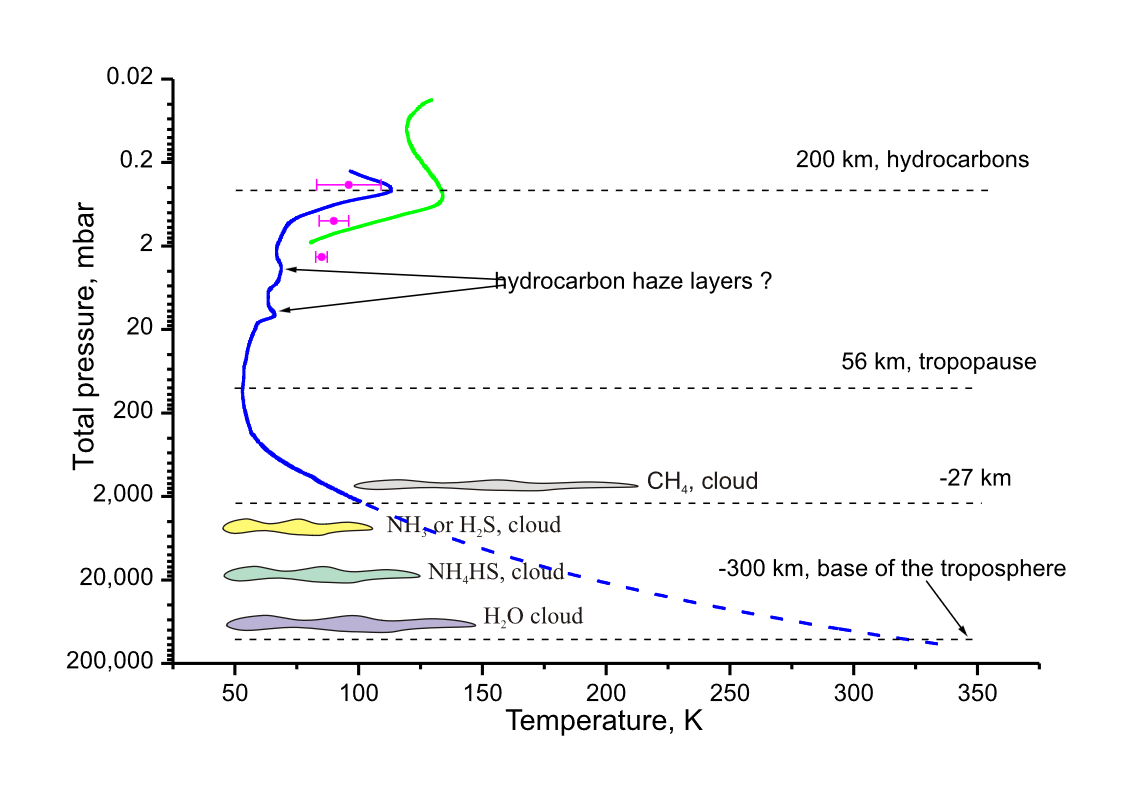 On Earth, the Challenger Deep has pressures of about ~1000 bars, and has indeed been reached on four occasions. It's closer to the interior of Uranus than the surface of Venus is (considering the composition and low temperatures). This means that we do have the capabilities to travel below Uranus's troposphere. However, we do have to worry about launch weight if we significantly increase how much pressure it can withstand.

The good thing? Increased pressure means increased ambient density, which in turn means an increased buoyant force: $$F_B=mg_U-\rho_fVg_U$$ where $m$ is the object's mass, $\rho_f$ is the fluid density, $V$ is the object's volume and $g_U$ is surface acceleration due to gravity on Uranus. Uranus is, on the whole, fairly light (with a mean density of 1.47 g/cm3), but at the core, densities can reach 9 g/cm3. We don't know much about the density profile inside, which makes it difficult to determine what the maximum depth we could reach is. If we assume the submarine will have characteristics similar to Nereus, we can estimate a mass of about 2800 kg and a volume of 22.5 m3, leading a critical density of 0.124 g/cm3. By taking in ambient fluid, the spacecraft can increase its mass, helping it sink further down. Given that the atmosphere is at low densities, and the core is at high densities, there's an equilibrium point. The question, of course, is where that lies - and what the pressure will be like at that point. Will it be too high, or survivable? How low can we go?

Since we've never done the mission you're proposing, we don't yet know that, so I can't give you a definite depth.

I cannot get my head around this. On Earth, if you fill a container with gas and liquids, the gas stays on top and the liquid below, with a clear boundary. Even if the liquid is boiling or if the gas is condensing, we see distinct phases. 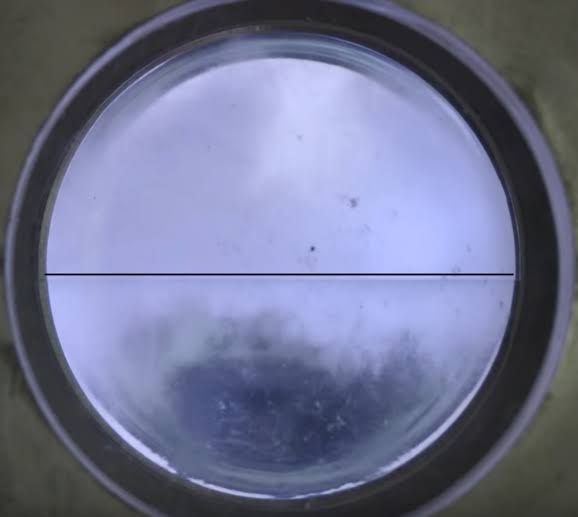 The above image is that of Supercriticial CO2. You can clearly see that the CO2 is now looking like it looks like a gas, and somehow still looks like a liquid. Keeping a gas under high pressures can do really weird stuff.

Supercritical fluids are basically a sort of form of matter, when the pressure gets so high that it can diffuse through materials like a gas, and yet be able to dissolve things like it were a liquid.

Also, supercritical fluid occurs naturally even on Earth. Supercritical water is a major constituent in the stuff that comes out of a "black smoker". 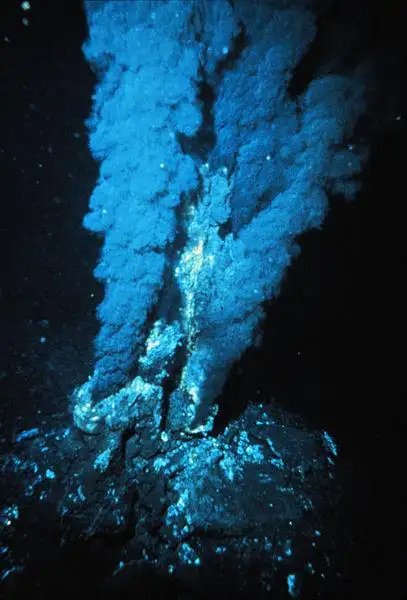 And furthermore, Uranus doesn't have "calm" weather. The wind speeds on Uranus can peak out at 900 km/h, strong enough to make Jupiter's Great Red Spot seem like a gentle breeze.

We indeed have water-ammonia here on Earth, it is known as Ammonium Hydroxide, or basically ammonia bleach. That stuff is pretty nasty and corrosive, and isn't pretty kind to human skin.

I'd rather colonize Jupiter, thank you.

4
Could Uranus have a solid surface due to its internal composition and lack of internal heat?

11
Could a Neptune like Gas Giant support life?
0
Can we manipulate the Sun, gas and ice giants to create more habitable planets and extend the life of our sun?
4
Is an earthlike planet with ammonia oceans even plausible?
1
How could a race of jellyfish like aliens convert the hydgroen atmosphere of their home world into fuel?
3
Potential atmospheric compositions given a temperature range?
5
Ice moons and giants? That close to the sun?
9
Gaseous moons: Are they possible?
4
Could Uranus have a solid surface due to its internal composition and lack of internal heat?
6
Should we use Saturn as a future base for colonization?