In my world, extremely small LEDs are vital.

My question is, with today's technology—or any reasonable improvement of, i.e., “we don't have the machine to build it but we have the sciences and theories”—how tiny a LED can we make given the following constraints?

Despite the title explicitly stating LEDs, please assume "LED" in this question refers to any light-emiting device powered electrically. The components by which it electrically produces light is free game; gas/plasma bulbs, liquids, solids, etc., are all acceptable components/properties of the device. Preferably, these constituents would be materials common in the universe, nothing too crazily inabundant. Take that however you like, it is less a constraint than a sidenote.

The LED may have any lifespan, milliseconds or years, doesn't matter—this may be to an answer's advantage, as it suggests that the device may be spontaneous and self-destructive to accomplish the goal.

The LED needs to be bright, preferably bright enough to see an individual LED (at least above the range of human minimum visibility in total darkness).

The LED needs to fare well around others like it. It shouldn't cause others in its immediate vicinity to change state or become damaged in some way. Making a display panel with the devices should be conceivable.

I'd go for phosphorescence. Basically, a photon is "captured" by an electron in the form of energy to be released later, as a photon with a frequency that is specific to the element.

Not sure about the fine-tunning, but I don't think they would need to be more than one or two dozen atoms in radius (i.e., in the order of nanometers or even ångströms). Regarding the technology level needed, it is currently possible to build multi-walled carbon nanotubes as well as nanotubes of different radii, but I think you would still need a scientific breakthrough or two to manufacture them in the exact shape and arrangement needed.

Let me be blunt

A microscopic LED is entirely believable. I'd ignore all the explanations of why or why not and roll with the idea.

LEDs are diodes that emit light when they're in their operational state. Fundamentally, when you ignore the mechanics of miniturization (fabrication), your limitations are three-fold.

Sometimes good fiction is about believable science. Sometimes it's not. We literally wouldn't have most of the science fiction we enjoy today if we only stuck to what we knew could be done. And since I've lived through it, I know that even when everybody believes it can't be done — sometimes it can. So, if anybody here is telling you it can't be done. Ignore them and write a great story. Just because we can't do it today and don't think we can do it tomorrow doesn't mean at all that we won't do it the day after that. Humans are cool.

Yes, it's possible to have LED displays with microscopic pixels. 3.74 μm qualifies as microscopic, I think.

The JD4704 is currently the world’s first 0.7”, color sequential, 4K2K LCoS microdisplay comprised of over 10 million of the world’s smallest all-digital pixels, with a 3.74 x 3.74 μm pixel size.

How about MicroLEDs? They're brighter, faster and cheaper than OLEDs. 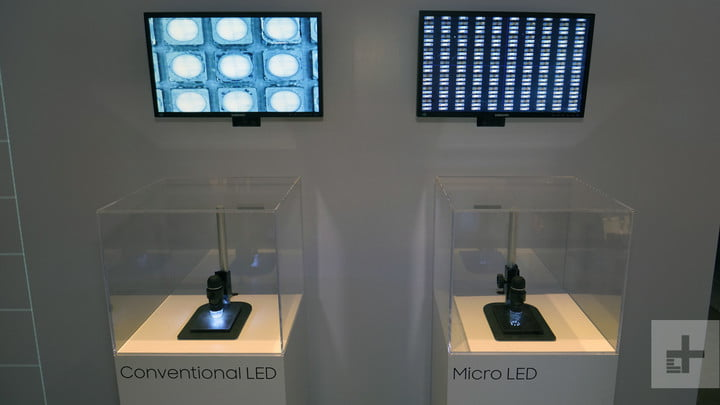 Comparison LED vs. MicroLED, from digitaltrends.com

I can't find any precise measurements though.

The constrain on LED size is not given by technology.

State of the art technology allows us to realize features as small as 7 nm for industrial production, with feature of 3 nm being already realized in research.

The limit is given by the eye resolving limit (0.008 degrees).

Their minimum size therefore strongly depends on the distance at which they are supposed to be viewed.

Wikipedia notes "Self-assembled quantum dots are typically between 5 and 50 nm in size", and quantum dot displays are currently being manufactured by many of the various large display companies. If a display with very small luminescent pixels is your goal - as opposed to strictly a miniature LED display, this would seem like a promising approach.

As other answers suggest, the limit is a few atoms (if we're talking about actual LEDs), or potentially a single atom if we expand the definition to include light emitted by phosphorescence or fluorescence.

If you're talking about a large 2D matrix of these components, then you can't neglect the space needed for supporting machinery.

So, I think the most plausible candidate is LEDs. At least, that doesn't have any obvious roadblocks. I can imagine the front layer of a very hand-waving RGB nano-display looking like this: 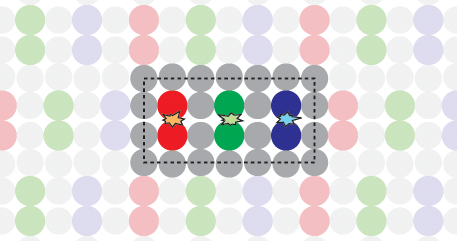 I am guessing that you'd need more than one semiconductor atom in the front layer in order for the light to be emitted at the surface, rather than inside the display where you wouldn't see it. And the LEDs need to be electrically isolated in order to operate independently. So, pretending that atoms are all the same size (which they aren't), an RGB pixel has an area of 24 "atoms".

The important thing here is that each sub-pixel can easily be smaller than the wavelength of light it emits. In the way we normally think about resolution, the resolution couldn't be any higher than this anyway.

However, at this scale, it becomes theoretically possible for the display to work as a phased array. If you can get the LED elements to emit light with a single, controlled phase (which seems plausible(?) since we're emitting single photons to order), then you can basically make the whole display work as a programmable, full-color true hologram, so you can display 3D objects just as if the display were a glass window. Of course this would require enormous bandwidth and processing power.

Heat would definitely be an issue – you're doing a lot of switching in a very small volume – but I don't know of any fundamental reason why such a display couldn't work if it were built on, say, a liquid-cooled copper plate. So I'd accept that if I read it in a book.

Not the answer you're looking for? Browse other questions tagged technological-development nanotechnology or ask your own question.

2
What would the fastest way for microscopic humanoids to spread across the world?