Rings made out of water? [duplicate]

There have been numerous questions on this site about moons being composed entirely of water. However, is it possible for a planet to have rings made out of water?

I think that the ring would probably freeze over/dissipate, but is there a way to realize this?

is it possible for a planet to have rings made out of water?

Of course it is. Just look at Saturn and its ring.

The rings of Saturn are the most extensive ring system of any planet in the Solar System. They consist of countless small particles, ranging from μm to m in size, that orbit about Saturn. The ring particles are made almost entirely of water ice, with a trace component of rocky material.

When you put liquids in space, they partially evaporate and most of it freezes. This happened routinely when Space Shuttle discharged the urine produced by the astronauts before landing the orbiter, leading to a plume of ice clearly visible from Earth (the so called Constellation of Urion)

This is the phase diagram for water. 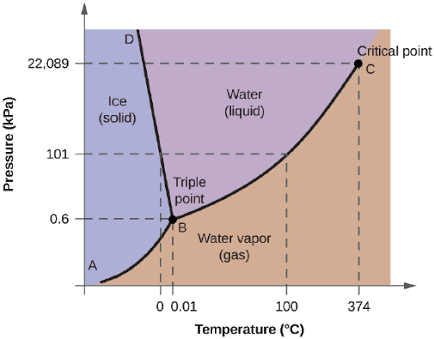 As you can see, it takes pressure for water to be a proper liquid. In a vacuum, it goes straight from solid to gas and vice-versa.

It would take approximately 0.6% atmospheres to allow for liquid water. As low as that seems, it is still much more than what you would get in space.

But don't give up just yet!

Interstellar Ice Acts Like a Liquid in Ultraviolet Light

When exposed to ultraviolet light, interstellar ice may act more like a liquid than a solid, a new study has found.

Researchers discovered this effect while re-creating the conditions of our early solar system's planet-forming disk in a laboratory environment, revealing how organic chemistry might react to the deep freeze of the system's outer regions and how the seeds of planets accumulate material.

And what is the biggest UV source in our solar system? Why, the sun itself!

So while the ice in the planet's rings gets enough sun exposure, it will become amorphous ice. While technically a solid, it behaves like a liquid, which allows for it to work as a solvent for chemical reactions much like proper water. Any reactions will be orders of magnitude slower than whay they would be here, and most might not be possible, so don't expect it to harbor life (at least as we know it).

It is important to note that the zero pressure of the vacuum is below the water's triple point. Below the triple-point pressure, water can either exist as vapor or as solid, but not a liquid. That is why there is no surface liquid water on Mars, in-spite of abundant ice caps. In other words, when you heat a chunk of ice in space, it just evaporates without turning to a liquid -- It sublimes.

The temperature too close to a star is above the frostline. The water ice will sublime and be gradually lost in space. At or beyond the frost line, the ice will remain solid for a long time, on a geological timescale.

Note that the sun's heat causes evaporation. Evaporative cooling freezes the water. Evaporation slows down as it cools and freezes, but the chunk of ice will eventually evaporate completely, if placed too close outside the frost line.

So, the answer is "yes", but it's water in the form of ice, not liquid water.

How about a sun with a ring of water?

In The Integral Trees, a 1984 science fiction novel by Larry Niven

The story occurs around the fictional neutron star Levoy's Star (abbreviated "Voy"). The gas giant Goldblatt's World (abbreviated "Gold") orbits this star just outside its Roche limit and therefore its gravity is insufficient to keep its atmosphere, which is pulled loose into an independent orbit around Voy and forms a ring that is known as a gas torus. The gas torus is huge—one million kilometers thick—but most of it is too thin to be habitable. The central part of the Gas Torus, where the air is thicker, is known as the Smoke Ring. The Smoke Ring supports a wide variety of life.

In the story there are lakes/ponds that are bubbles of water, If Gold was a water planet with little to no free atmosphere, the ring would be water that harbored life.

Not the answer you're looking for? Browse other questions tagged orbital-mechanics planetary-rings or ask your own question.

19
Is it possible for a planet to have a liquid ring?

4
Effects of Rings: Tides
20
What would the sky look like in the SHADOW of planetary rings?
11
How would a planetary ring react to a magnetic field?
2
What If Earth Had an Equatorial Ridge
11
Could a gas giant's moon have stable rings?
8
Effects of Rings - Debris?
2
Reality Check - Collision of a Moon prevented by turning it into a ring
9
Ringed Planet: The shadow's effect on fauna
4
Are elliptical rings feasible?