What can I do with perfectly precise “weights”? [closed]

Suppose I have a few "weights". Half of them, and I know which half, has a mass EXACTLY, to infinite precision, twice the other half. I know that very quickly the weights will not be exactly related to each other, due to say dust from the air landing on them unequally. Taking that into account, what practical uses can I do with these weights that takes advantage of the fact that some are twice the mass of others?

You may be interested in the IPK and its six official copies. Metrologists define the kilogram from the IPK. It's so special that it's never used to measure anything other than to compare it against the clone IPKs. And it has been drifting for some reason yet unknown to metrologists. They're about 50 micrograms off of being the same 1,000 grams masses.

So what can you do with these masses? Well, you can look at what metrologists do with their IPKs. If there was anything more valuable to be done with them, you'd see them doing it.

Of course, next May, we are finally shifting off of this standard. Instead, the kilogram will be fixed precicely to Planks constant.

Avagadro's number is also getting fixed, which means the number of atoms in a kilogram mass like this is fixed: 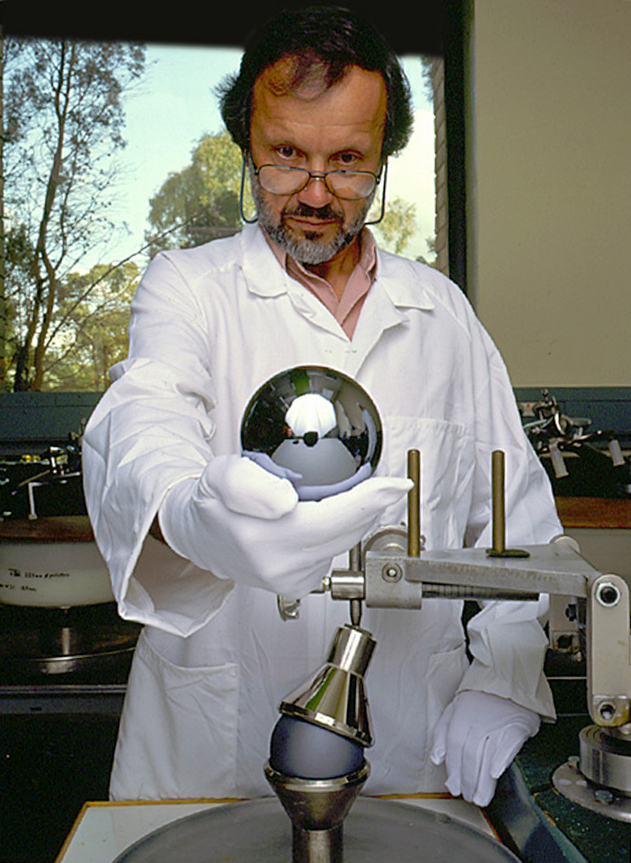 So at the very least, your masses should be good for one heck of a good guess for "how many jelly bean atoms are in this jelly bean jar!"

Nothing. Perfectly precise weights are only useful if you intend to build a standard based off of it like the current SI units and the definition of a Kilogram (before they changed it). Of course the biggest issue would be getting everyone to agree to your perfectly precise standardized weight (Stares at America in particular) and your weight can't change. So that's no touching and no decaying checked off. Outside of that, your weight is just a weight.

Things you can do with a weight:

Not the answer you're looking for? Browse other questions tagged technology or ask your own question.

8
How to quickly leave a planet for another planet en mass starting out from stone age tools?
10
Technological applications of light only wormholes
5
If I have multiple identical AI Oracles that can answer only Yes or No, can I play them against each other to detect a treacherous turn?
5
Can I kill a cyborg with magnetism?
1
How would one design infrastructure in a world where people can disable technology with their eyes?
7
How can chaotic entities be prevented from spreading beyond their domain?
5
Can a Robotic Eyeball Be Created that Perfectly Replicates Human Vision?
3
How could a portable handheld weather machine work?
2
Can you generate DC electricity efficiently with pneumatic power?