What would be the usefulness of both arms and fins on a sea dwelling, amphibious organism?

I am currently designing a highly intelligent species for a sci-fi project I am working on. They are quite similar physically to prehistoric salamanders or similar amphibians, but I am having trouble coming up with a reason they would evolve arms longer than their legs and becoming hexapeds (so they can have the ability to construct tools in the future), because wielding tools with their forearms would be difficult on land, while still walking low on all fours

The only reason I have for them to evolve longer arms early in evolution (seeing as the bone structure is already available to grow these limbs) would be to walk or hold onto the sea floor. But those don't seem like necessary traits for a creature that can already swim and walk on the sea floor with relative ease.

Other than that I am stumped. Would there be any other reason a sea dwelling organism (or amphibians) would want or need the extra, longer limbs?

Crabs have multiple legs to help them navigate both the seafloor and dry land and, in the case of these real life hell spawns, trees: 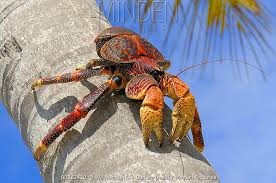 In some species, the last two legs have fins for swimmung: 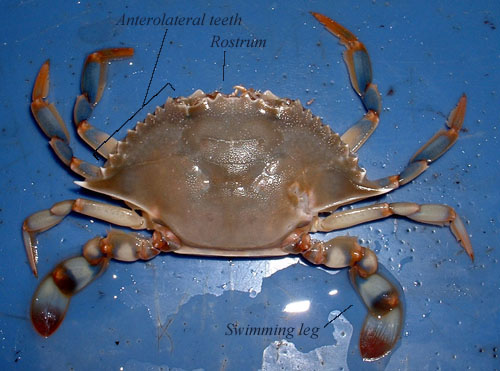 They also have appendages that can be used for subduing prey, holding on to sexual partners, digging tunnels, going to war... 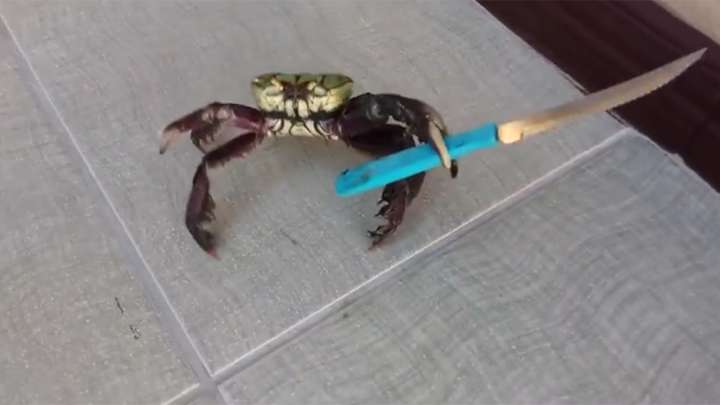 And generally enjoying the good things in life, while proving to primates that opposable thumbs are not a hard requirement: 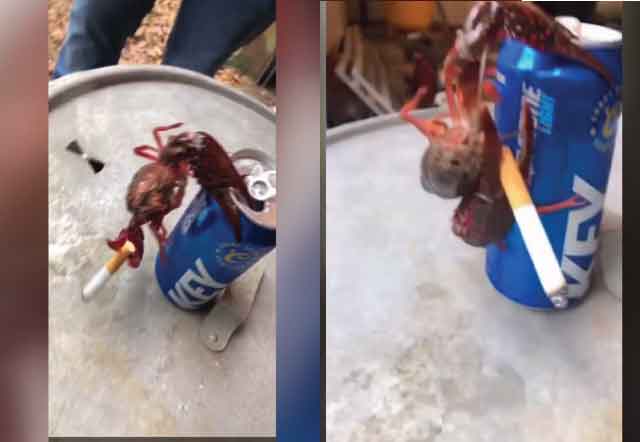 Your beings could just follow the same evolutionary road as crabs. There is a boffin name for it, convergent evolution:

Have them evolve to a point where they are crabby, and from then they evolve more dexterous claws. The evolutionary pressure may be that, just like for us humans, tool usage was a positive adaptation; safe from so many threats from nature, they live longer and reproduce more. Everything else are just details in your story.

The crab answers are good ones - crustaceans have multiple limbs for walking, swimming (think prawms of shrimps) and sort of for breathing. Sort of, because each shrimp swimming limb (called a pleopod) sometimes comes with a gill at the top of it.

You could apply that sort of anatomical arrangement to tadpoles-like aliens or axolotl-like aliens: a gill at the top of each leg, instead of clustered in the neck. Axolotl picture

Hox genes, which control body plan and can be responsible duplication of "segments" or the body, could have mutated to slot in an extra pair of limbs. The environmental pressure might have been for the extra gills, and the legs are just a side effect which turned out to be useful.

Alternatively, perhaps the alien equivalent of the lobe-finned fish from which four-legged amphibians evolved had three pairs of fins, not two pairs as our ancestor did. Your alien proto-amphibian would therefore start out with 6 fins which turn into 6 legs.

The next thing is to avoid evolving a neck! Fish don't have - or need - necks, because the water supports their body. If a goldfish wants to feed on food at the bottom of the pond, it simply tilts its whole body (as in the first photo on this site).

Once you are on land, you can't float about in the air, so you can no longer do this! To get your mouth in contact with the food on the ground, you either have to:

I'm going to second Renan's answer of "crabs" as an example of why underwater manipulators would be evolved.

I am going to talk about evolving hexapodal vertebrates.

Basically, you want this to evolve from the very first vertebrates on this world. You want that first bony fish to have six fins, not four.

If an organism attempts to switch the number of limbs it has that's asking for problems. Consider how much infrastructure your arms and legs have in terms of bones, muscles, and tendons outside what you would consider your "arm" or "leg." That's a fair amount, and if you add another pair to your body that means that you're likely to see that new infrastructure interfering with other organs and being finicky or inconsistent. (Imagine you get a second pair of arms, but when you raise them above level an artery gets pinched and they drop. Or those arms don't have sockets, so they wind up sliding around your torso all the time.)

Not to mention that if the species has any sort of "eat the weak children" the one with the different number of arms will probably get eaten. Which is to be expected, since it's an obvious mutation that might be accompanied by a bunch of other mutations.

This would also sort of apply in reverse. While the infrastructure effects wouldn't be as powerful, there would still always be some problems associated with just removing limbs. Let alone any other mutations that accompany it also causing problems.

If this creature is sapient, then they could have evolved hands directly as a result of this: What would happen is that the forelimbs would be used to manipulate things, but not very well as at this point it would just be a foot. However, those who are better at using their feet would be able to make better stuff, which would increase their chance to survive or reproduce. This would give a selective pressure towards more dexterous forefeet, which could easily lead to the development of hands

Not the answer you're looking for? Browse other questions tagged science-based creature-design evolution xenobiology .

13
Possibility of bipedal mostly-aquatic species?
6
With dunkle-like Jaws, how long could the neck be?
4
Are flexible digits viable for both running and climbing?
4
Adapting ostrich legs for climbing
5
What advantages or disadvantages would a bipedal humanoid have if their neck connected at the back of their skull rather than the bottom?
6
What could cause a race to evolve with their limbs' primary functions reversed?
1
What would be an environment conducive to the evolution of varanids based Naga?
1
Why a dromaeosaurid would evolve to lose its legs? (to become an Quetzalcoatl/Amphithere)
8
Why didn't the military give T-rex clones a bigger more powerful arms?