How to maintain container temperature for as long as possible?

These two stones would have a room temperature which is normal but, when induced with magic from the user, they would do their job then revert back to normal temperature in the matter of seconds. Also, the stones will shrink with every application of magic.

Back to the question in the title, I'd been thinking, perhaps we could use the vacuum flask (thermos) design. Perhaps we could build the thermos cap with channelium that would then have the stones attached in it, so we could replace the stone easily. But it would raise another concern with channelium, now it is too hot/cold to touch! I don't even know about the possible problems that might occur with the real thermos design, pressure maybe?

So, what another properties should I give to the channelium beside channeling magic? Are there another plausible approaches to design the fire & ice stone temperature container, with or without channelium?

EDIT: I don't know about fire temperature difference from the different fuels, but it could be more or less like 'coal fire', since that is what they use for steam engines in the "industrial revolution", isn't it?

Weave a mesh basket like a tea infuser out of channelium with a long chain or wire handle. 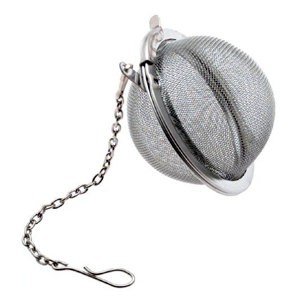 Put the stone inside the channelium basket.
Use the handle to lower and raise the stone into and out of whatever container you are using.

The mesh allows for circulation of liquid around the stone, and keeps the stone in place, so long as you remove it before it shrinks to the point it's smaller than the weave of the mesh, while also allowing constant contact with the channelium.

And it'll work with any container made from whatever material you happen to have handy.

Coat the inside of your thermos with channelium and drop in the type of stone you want. Replace it with a different stone when needed.

The stones shrink, assuming only the surface area shrinks you want to have as large round stones as possible so theres the least surface area to shrink, while having as much volume that generates energy per use.

A thermos is designed to contain a hot liquid while losing as little heat energy as possible, making it possible for the user to handle the thermos without burning their hands.

You create a normal thermos, and similar to a water cooker you put a heating element made out of channelium inside. Rather than in the top of the thermos you create a compartment in the bottom that you can unscrew and place a stone inside off. The compartment is made of the same insulating materials as the thermos on the outside and inlaid with channelium on the inside. This way you have an easier time picking up the flask on the top and the bottom has more space for insulation to prevent burning your hand. Its not an oxynegation reaction when the Stone heats up so no fear of sudden melting or fire if the material can stand the heat alone. The maximum size of the stone can be chosen to limit the maximum energy output per use and prevent problems while still heating the contents.

Edit: Its actually an intriguing thing. As a large sphere these have the most uses before expiring meaning the most energy generation over time. Grind them to smaller and smaller pieces and they have the most surface area for the fastest energy transfer but also reduce in size much faster.

Not the answer you're looking for? Browse other questions tagged reality-check chemistry temperature .

5
Can ice be used as a practical weapon in late medieval times?
12
The Sword in the Stone
1
How could a high medieval 1000bc level tec army use these spells on a large scale battlefield
10
Diving into water to escape lightning attacks
5
Possibility of a "hot Mars"
2
How feasible are these two drastically differnt technological pathways for different civilizations?
11
Cooling Question: How can I integrate a low tech freezing system into my world?