There are many tiny humanoids in fiction, the Arquilians of Men in Black, the Gargantians of Buzz Lightyear Star Command and a few others. This raises the question, is it possible for a humanoid species to evolve to be so small? 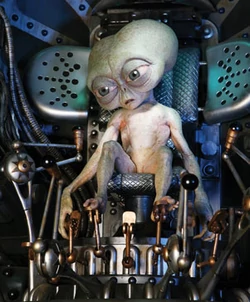 Let's try to stick to natural evolution only and no tiny machine sentient entities.

NOTE - At this point I have to attend to real life so will have to continue this later.

There are two implicit questions here:

Mammals come in a range of sizes, all the way from tiny (the Etruscan Shrew weighs 1.8g) to huge (an African elephant can weigh 6 tons), so a human's fundamental biology seems like it shouldn't have issues. However, you will notice that all small animals tend to use all four limbs for motion. Even squirrels with relatively dexterous hands use them while running. I think this is because as you get smaller, terrain gets relatively larger. As a result, the smaller an animal is, the better it has to be at climbing, and at small scales this probably favours claws over gripping-fingers.

The other question is one of intelligence. Can a small creature be sapient? Well, this is an impossible question to answer really, because we can't really figure out what it is that makes humans different to animals from an intelligence perspective. Some thing that may offer clues is the brain-body-mass ratio. Man definitely falls near the upper end of that, and you can see a definite increase of "intelligence" as the brain mass increases. However, even animals with brains 5-6 times heavier than humans don't seem as intelligent. And on the other end of the scale, the Portia spider has a body 5mm long (and so a head that is extremely tiny), and yet it exhibits the ability to "hunt in ways that seem intelligent". This includes the ability to plan routes to prey that take it out of visual contact.
I have a theory that the physical form of an animal dictates it's intelligence. I think that (given an evolutionistic model), any creature with sufficiently dexterous manipulators, sufficient perception fidelity, and with the ability to communicate with others of it's species should be able to become intelligent given enough bootstrapping time. So if you had a miniature humanoid creature and left it for long enough, that theory states that the creature will become intelligent. I wrote a much longer post on this topic answering this question, and this idea is also mentioned in this short Michio Kaku talk.

So in short: I can't see any reasons why it wouldn't be plausible.

Simply looking at the picture of the Pygmy Marmoset in Chasly's answer should be enough to persaude anyone of that.

The implicit question identified in sdfgeoff's answer ("Can a creature that small be intelligent") is another matter.

The answer to that may (at least in part) depend on your answers to two questions.

It's a question (being the inveterate science fiction & fantasy obsessed man-child I am) I've often contemplated myself & if you'd used reality check as one of your tags (which you've not) I'd suggest I thought you'd be lucky to attain an equivalent intelligence to a four year old child in an animal as small as a large mouse or a small rat.

Which is the size your reference to the MIB alien suggests to me you're thinking of?

This opinion (because that's all it is) is based on a lot of prior reading through countless online & other articles on various ancillary subjects on intelligence in man & animals, selective breeding & god knows what else (I certainly don't, a lot of it I've forgotten) .. research (if you can call it that) during which I've habitually kept no notes (as it was purely for personal entertainment).

So I've no links for you & getting them would require almost as much time spent retracing my steps as I spent walking that path in the first place, so I'm not going to, sorry about that.

With no reality check tag or in-world (yours) detail to suggest otherwise my answer is "hell yes!" :)

"How small could you see humanoid aliens getting?" (Joe Smith in comments).

Jyoti Amge with primordial dwarfism is 2' tall, has finished school & is considering studying for a degree (unless that was an old article & she's already done that) : so I'd suggest anything down to 2' tall is certainly reasonable but beyond that I wouldn't like to hazard a guess.

If intelligence isn't an issue then anything down to the same size (by body weight) of the smallest species of mice or shrews (an Etruscan shrew 2 g & 4 cm long) is reasonable.

If only a small degree of intelligence is sufficient for your needs, just enough for language, some tool use & small family groups or tribes (but nothing approaching a technically & scientifically advanced society) then the common crow may be a good model of the smallest they might be, some use tools in the wild, can mimic speech & recognize human faces (they've a 15 g brain).

If I was trying to design a plausibly intelligent (but not scientifically advanced) tiny humanoid based on the crow for size I'd probably add a gram or two to the weight of a crows brain weight & then try to work out from there the height & weight of a scale human with that size brain.

The average height for an adult north american male is 175.5 cm

OK then, so how does a one foot four inch tall human with (lets call it) a 17 g brain in a slightly larger than normal for scale (barely noticeably so) head to fit it in with a vocabulary in the range of 2000 words living in small family groups with nothing more than stone age tools sound?

I'm not sure how small we're talking, but take a look at chimpanzees.

Now if you had a chimpanzee become more intelligent (i.e. more synapses and more oxygen-rich blood flowing to the brain, as well as heat dispersion), for reasons such as gaining an advantage over other species or navigating complex and ever-changing environments, it would be quite imaginable.

Ignore this ramble, left it here for documentation's sake:

The main issue I spot is heat dispersion, since the surface area is considerably small when compared to the volume of the head. Some of the heat may be transported through the blood, perhaps leading to large ears (such as in African elephants or desert foxes) or tongues (thing panting dogs) to dissipate the heat.

A more exotic solution might be to shape the skull in such a way as to increase the surface area, perhaps with deep wrinkles or folds, though this may come with structural integrity issues, and will not transport the heat in the center to the surface very quickly. It may also impede the room for the organs, perhaps even causing a split brain for a U-shaped skull.

Other than that I don't see a problem whatsoever.

I'm completely wrong as pointed out in the comments, it's the larger the animal the harder it is to manage heat. Pity though, may have been interesting.

Perhaps the smallest primate is the Philippine tarsier, with a length of only 85 to 160 mm and a weight of around 80–160 g, so if you just want a humanoid, adjust the muscle distribution to make it walk and remove the tail and presto, you have a small, furry, ugly-looking humanoid. 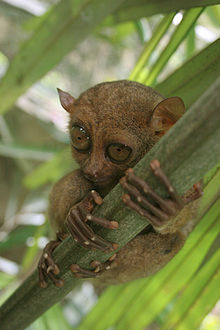 If it needs to be as 'smart' as a human however, my maths runs dry.

The human brain has a volume of roughly 1200 cm3 an a weight of around 1.3kg, containing about 100 billion neurons (let's ignore the protective cells) each with a diameter of around 4 to 100 micrometers (um), allow us to assume an average diameter of 2 um (because a lot of them are small and we're cramming them in properly), so each neuron is roughly 30 um3 in volume.

Now 100 billion neurons times 30 um3 is 3 million cm3, which is more than 2500 times the volume of the human brain, so either my calculations are entirely broken or the human brain is already really cramped.

If anyone can correct me, please do! Hope this helps.

Is it possible? Yes. Other answers provide ample examples of small primates. However, all of these small primates have limited social and tool using capabilities compared to humans.

Research has shown a relationship between brain size and maximum social networks. If we assume that these tiny humanoids have the same kind of computational power per unit brain volume, then we can expect them to have fairly limited social and tool using skills as well.

However, if the humanoids of that planet use a different brain chemistry or brain structure with a higher density of computation power and storage, then small humanoids with human or better mental capacity is a real possibility. I have no idea what this new chemistry would be, just that it's plausible.

Small animals are more prolific and more adaptable than larger animals. If the environment changes abruptly, small animals are in a better position to adapt than larger ones. Perhaps in this world, extinction events are more common which significantly diminishes the maximum sizes a species can grow to. (It takes time for a species to slowly evolve to a larger average weight.) It's not hard to conceive of circumstances that regularly wipe out the heavier species while the social and tool using skills of the small humanoids end up being a huge survival advantage.

Not the answer you're looking for? Browse other questions tagged evolution aliens humanoid or ask your own question.

14
Are there physiological traits common to all tool-building species?
8
What does the anatomy of a fairy (10-20 inches tall, flying humanoid being) look like, as evolved from a regular human being?

3
How does an Alien world have Earthlike creatures?
5
How to delay agriculture to allow for additional evolution?
12
How to evolve a reptile into a wyvern, 100 million years in the future?
2
can Elf be in family with Fairies and Angels?(updated)