Is it more likely that merfolk would evolve with horizontal or vertical tails?

Is it more likely that such a race would evolve with a horizontally or vertically orientated tail? What are the advantages of both?

From the point of view of propulsion there is no real advantage either way. The orientation of fish as opposed to marine mammals is almost certainly an accident of evolution rather than a positive adaptation.

There are a few cases (stingrays, flatfish, etc) where orientation matters and in those cases it's evolved to the behavior that is useful for that form but in most cases it didn't matter.

Fish quite possibly evolved from creatures like worms that slid across the ocean floor using horizontal motion. As a result that horizontal motion was kept as they evolved into true fish and developed vertical tails.

Marine mammals evolved from legged creatures with a spine that was designed to flex up and down and legs that likewise bent backwards and forwards rather than from side to side. As a result this basic body-design was kept even as they reformed for an aquatic existence.

So are your merfolk fish that evolved human-like upper halves or are they humans that evolved fish-like bottom halves?

For practical purposes with maneuvering on land, using wheelchairs, etc a horizontal tail is likely to be more convenient. In particular a sitting position requires you to bend your body in a way that a horizontal tail would allow but a vertical one would not.

I'd favor the horizontal case, largely because it cooperates properly with the rest of a humanoid body, regardless of whether it's a fishtail or not. 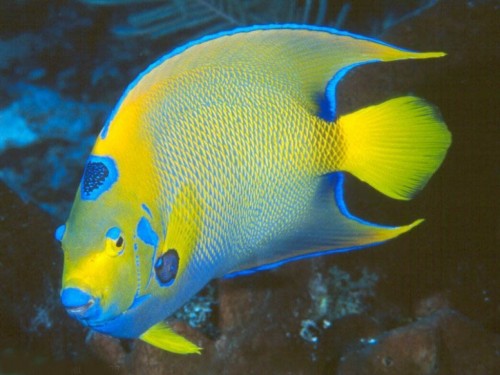 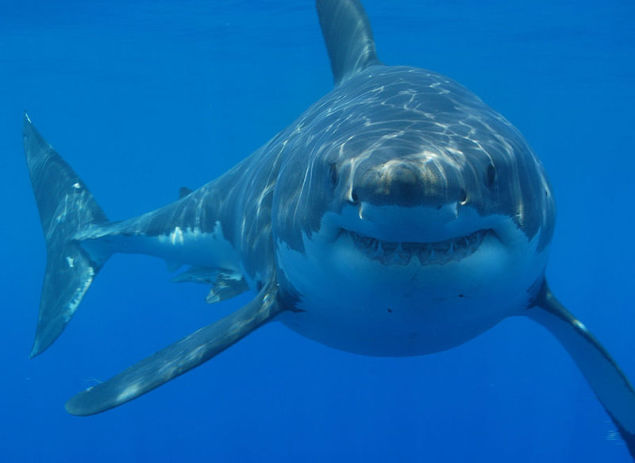 which doesn't strictly have a plane to align with. However, when it comes to mammals, you don't see vertical tails at all: 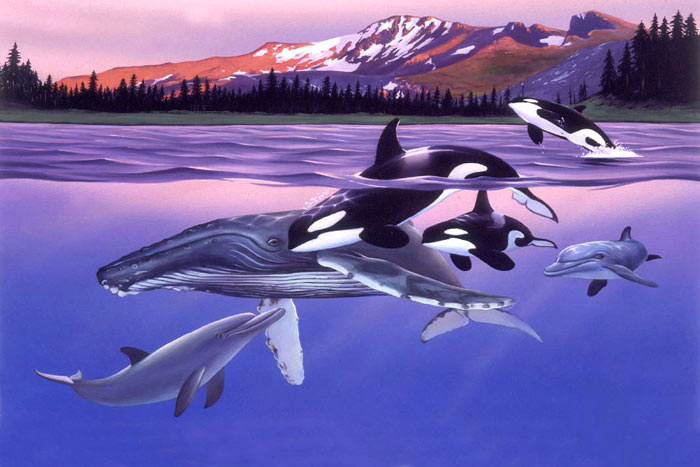 and with humans, a horizontal tail would be more likely to evolve, if it ever was a possibility, since our bodies do have a plane when swimming: 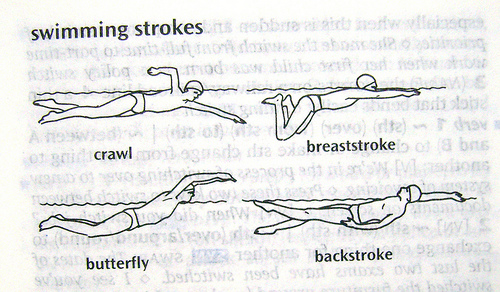 Notice the butterfly stroke, which is the closest to how sea mammals swim. Here's another sea mammal: 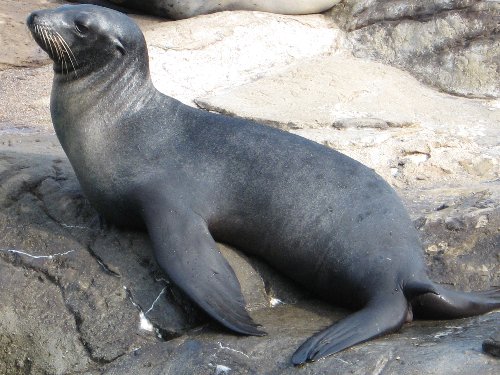 Thus, it makes the most sense, to me, that merfolk would evolve with a tail, this way (pretty much the same as they've always been depicted like): 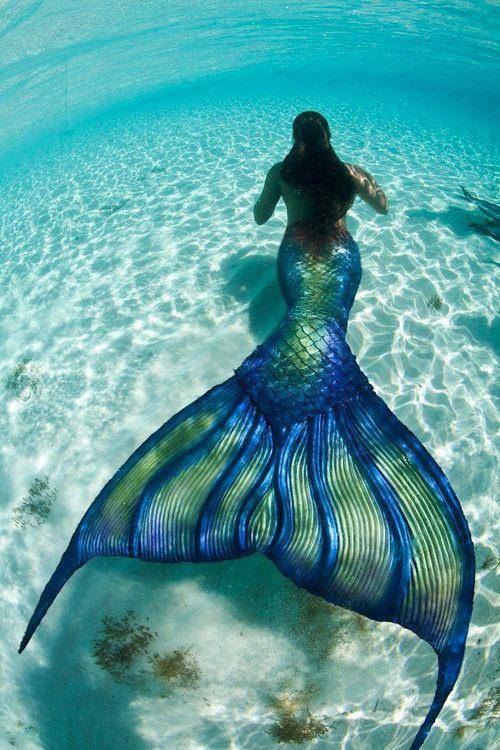 One aspect of the vertical/horizontal decision you need to take into account is that fish live in a 3D environment. The tail fin not only acts as propulsion, but provides directionality on one axis orthogonal to forward movement. You need yet another set of fins to provide directionality in the third axis.

Fish with vertical tails have two fins on their sides for the horizontal directionality.

Mammals with horizontal tails have a stiff vertical fin on their back, and two fins near their front which are controllable and angled to provide some vertical and some horizontal directionality.

These configurations provide excellent maneuverability, and convert most of the tail motion into forward movement.

Traditional mermaid designs with a human top half, and hands without webbing, movement is less efficient and provides less maneuverability. You can use your hands to provide most of the needed balance on the other axis, but with such a small surface area it's not going to work very well.

The questions I'd be asking myself are:

The reason traditional mermaids look the way they do is because they appear more human with a hip and knee joint that have the same flexibility and range of motion as a human's. Change that to a vertical tail and they may fall into the uncanny valley, where you can't pose them without it looking wrong or uncomfortable.

If your world isn't going to be published in a visual medium, it probably doesn't matter.

It's to do with mostly three things: locomotion, stealth and breathing.

If your merfolk have gills (as you describe) and are more stealthy (stilthery) then I would go for the vertical tail, to support their appearance.

This can be a great way to decide how much you want to distance your race from the humans. Do they resemble friendly dolphins, or dangerous sharks. It's possible that the psysical attributes will trigger direct cognitive links to these.

It reflects the evolutionary history of locomotion. Our wormy ancestors slithered on the sea floor, so undulated side-to-side. Fish inherited that movement, for which a vertical tail is best.

Their distant land mammal descendants evolved to run with limbs underneath: an unstable gait allowing rapid direction changes. To extend the stride, their spine flexes up-and-down. Marine mammals kept this movement, for which a horizontal tail is best.

In order to establish what is more likely, you would need to have a rough idea of the evolutionary route they took. Thinking about this may lead you to a history that explains how they evolved naturally to look as they do, or you may decide natural evolution is unlikely to settle on that shape, and therefore seek another explanation.

A sharp distinction between one body type and another seems unlikely to evolve naturally. If scales are beneficial why wouldn't they appear all over? A real world example of creatures with such a sharp distinction is biological chimeras. These are creatures composed of genetically distinct cells. This happens naturally in many animals (including humans) resulting in parts of the body having different genetics to others. It can also occur between species, although not naturally as far as we know. Goat/sheep chimeras have been created (called "geep"). However, these do not have a neat line across the middle - the divide between the two species can be anywhere and may not be visible externally. They are more likely to appear "patchwork" than neatly half and half:

Also the offspring will be of the same species as the reproductive organs (either a sheep or a goat, not a geep). There are species where the majority of offspring are chimeras, for example the marmoset. It's difficult to imagine how an inter-species chimera could give rise to similar offspring. It's also unlikely a chimera would survive between two such different species as humans and whatever species of fish were used. The fact that fish use external fertilisation does provide the possibility of a fertilised fish egg being introduced to a human's womb, to then combine with a fertilised human egg. If merpeople had two sets of reproductive organs then the fish and human eggs could be both released internally, and then combine following fertilisation on the way to the womb. In this unlikely set up, I would expect the tail to be vertical since it is produced directly from fish genetics.

By giving it both lungs and gills[1], you're describing a biologically implausible creature so it makes no sense to then try to biologically determine which way the tail fluke will work.

None-the-less, consider the biology of the two systems. Fish swim with a horizontal motion by undulating their spine along its length, mammals - on the other hand - experience less curvature of the spine and make more use of elements beyond the spine. With the flatter, stiffer upper body of a human it makes most sense that the mermaids would swim with a mammalian vertical motion.

[1] - and, I'm guessing, giving it the kind of discrete thin slits in the side of the neck that make even less sense. Gills work by large volumes of water being passed through the large, open, mouth and out through the gills. A creature with a human style mouth and head could not use gills effectively. Besides, lungs are probably better than gills for a sea creature anyway - this is how dolphins and whales were able to invade niches previously occupied by fish - and it's unlikely that gills could provide the oxygen needed for a fully warm-blooded creature.

Which way does a merfolk's spine bend most easily?

There is no inherent advantage to a horizontal or vertical tail, per se. The big thing is that it needs to be perpendicular to whichever way the spine most easily bends, because that allows the creature to "put its back into it," as it were. If your world's course of evolution is anything like ours, then merfolk likely didn't split from their cousins until fairly recently (as far as evolution goes), and so they probably still follow the same basic body plan as their ancestors.

If the merfolk evolved from fish (and those fish are much like real-world fish), then their tails should be vertical. We see this pattern in virtually all forms of fish that have tails, including sharks and even the jawless fishes.

If the merfolk evolved from mammals, then their tails should be horizontal. This is how real-world cetaceans evolved. This happened not because of any particular advantage in locomotion, but because mammalian spines bend more easily in the vertical plane than the horizontal one.

Then again, who is to say that the merfolk evolved from anything? The real-world's fantastic depictions of merfolk usually depict them with fish-like fins, but arrayed horizontally like a cetacean's flukes: a combination that I'm not sure has ever appeared in any real animal. If your merfolk were creations of magic or super-science, rather than products of evolution, then their body plan would be entirely up to their creators. Humanlike creators would probably prefer a horizontal tail configuration, because that corresponds more closely to the tetrapod body plan that humans (and other mammals, including cetaceans) follow. Fish-like creators would probably prefer vertical tails, for similar reasons. Either way, it should still be perpendicular to the direction that the creature's spine bends, so a vertical-tailed merfolk would move in ways that many humanoids might find very unsettling.

If you want to introduce selection pressure and species conflict as a plot point, those with horizontal tails would be easier to see (and hunt) from the surface. Why not have different species of mermaids?

It depends on how they evolved. Air breathing land animals returning to the sea occured at least three times in evolutionary history with Ichthyosaur (reptiles), Pliosauroidea (saurian) and whales/dolphins. All had nearly the same forward body plan which evolved in parallel separated by millions of years. The general streamlining, the positioning of the dorsal and ventral fins were all nearly identical.

But the tails differed. Ichthyosaur and Pliosauroidea had vertical tails and whales had horizontal. The difference being that the ancestral reptiles and saurians moved with an s-type motion like that seen in lizards today. It was easier to broaden the tail vertically to turn left-right motion into forward thrust. Conversely, for mammals have a straight line body motion and largely move their tails up and down to balance their center of gravity as they run. A horizontal tail is quick to evolve.

Did these merfolk ever leave the water? 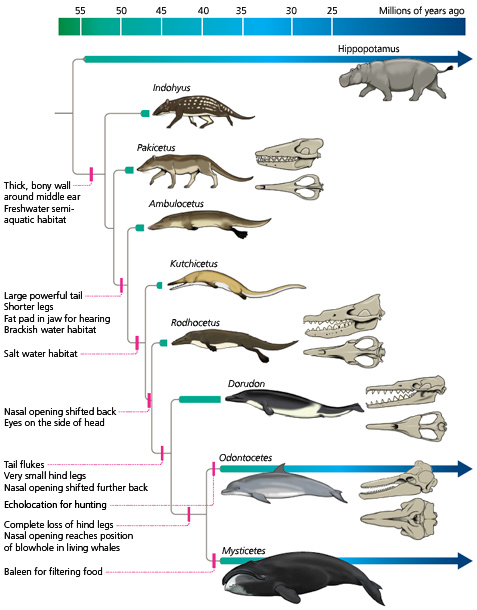 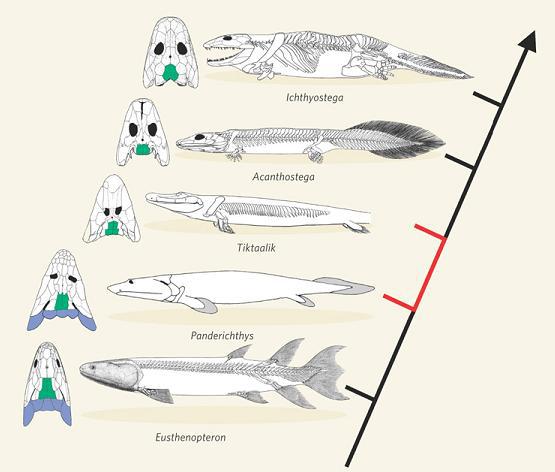 Not the answer you're looking for? Browse other questions tagged science-based creature-design evolution fauna merfolk or ask your own question.

56
What would be the best way to fight a duel with lightsabers?
14
Social implications of intelligent species that practices external fertilization
9
How realistic are four legged aquatic animals?
3
Why would merfolk evolve arms?

27
What adaptations would be made to a town to make it more merfolk friendly?
9
How realistic are four legged aquatic animals?
9
How should I create my Merfolks to make them landbased?
11
Mermaids on Land?
13
Mermaid Buoyancy: Oily Livers, Swim Bladders and Lungs
15
Let's evolve whales and dolphins back onto land
2
Evolution of vipers (merfolk)
62
What would a medieval war against an aquatic race look like?
23
Fantasy Macro Economics: What would Merfolk trade for?
6
Are Air-Breathing Merfolk Viable?