How can the terrain of a large area change abruptly in a short period of time?

Ideally I'd like to avoid "A Wizard Did It" type explanations (which is what I currently have), instead having something plausible for how mass changing of terrain of landscapes could occur.

You could imagine a few things:

I'm sure there are more explanations to be found ;-)

Some changes would be hard some would be easy. Many broad change categories could have many equally plausible reasons. To go over your specific examples (and a few others):

As you can see from those examples, reasons are fairly easy to find for most changes. Fast plausible reasons may be slightly harder to find but still definitely can find them. Tectonic activity is generally good for high speed as are meteorite strikes and storms. The trick to maintaining believability is knowing what follows what. So you could have, for example: a rogue comet hits the planet, thereby melting polar icecaps and readjusting coast lines.

Your landscape is microscopic. 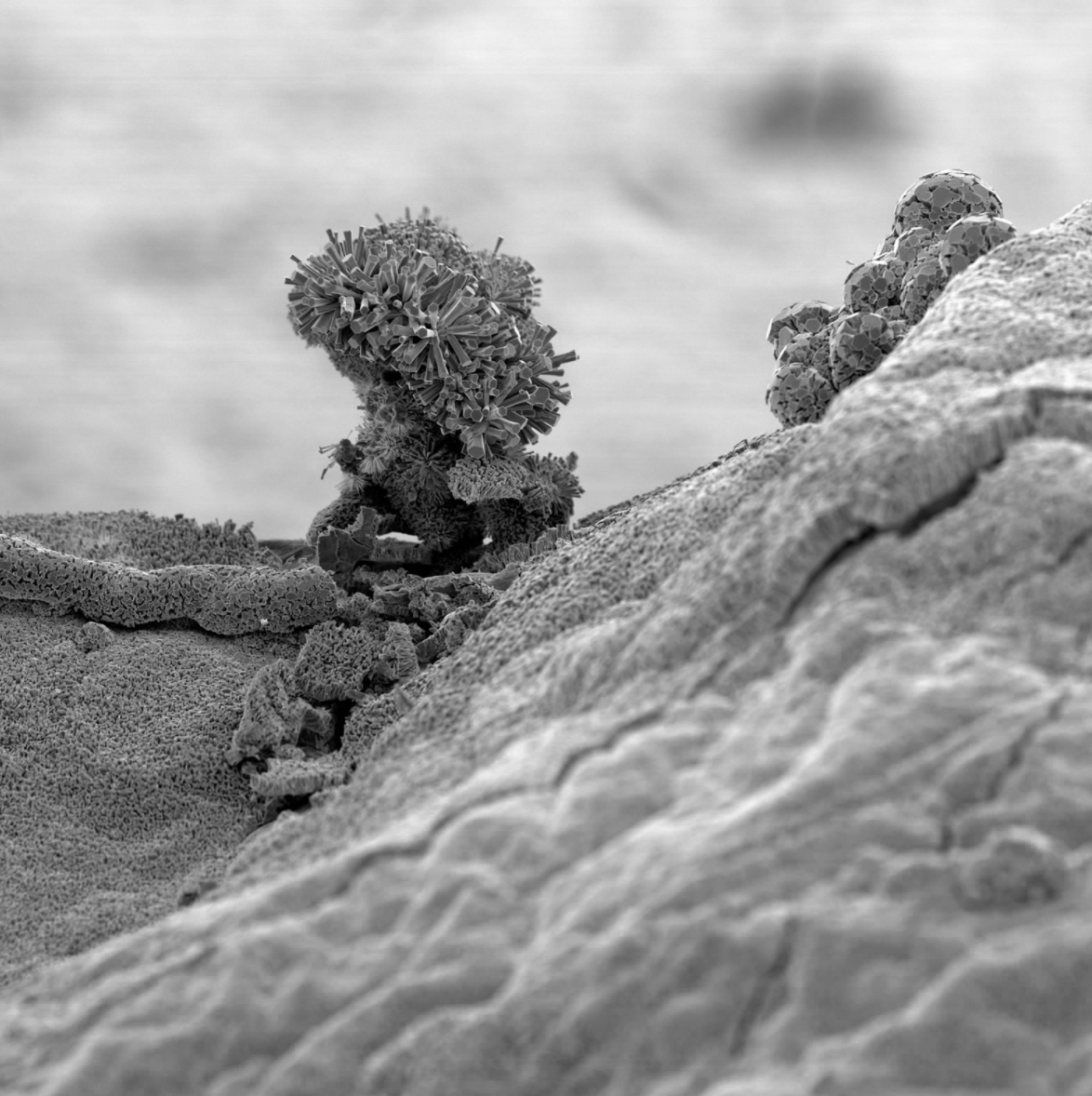 On this scale, things change fast. Windblown dust becomes a mountain. Fungal activity melts everything into a field of spores, which then desiccate into a cracked wasteland. Then rain washes it all away. Crystals form and push their way up into towering spires. The footprint of a passing squirrel opens deep gullies.

Relativity easy, as gravity always drags things down. Erosion is a force without bounds and wind can really do a number on things.

Storms and tides: for a country next to the sea, the sea itself gives and takes. Storms with very high tides can change the landscape in days. Never mind if you give it weeks. What was a few hills next to the sea becomes a few island. Worse if you already start with a river delta. See the great flood of 1953.

Earth quakes: are a big changer of scenery in a lot of places. Almost every thing can be moved this way and building need a special way of building to be able to cope with it. See Lisbon Earthquake of 1755.

Glaciers: could be seen as a subset of water, and normally move to slow, but they do make a big impact on the country side. Maybe a runaway glacier?

Epic Floods: If a natural barrier brakes and a low land area get flooded you can change fast from a hilly country to islands. For a big one see: Zanclean flood.

Building is harder then breaking down, and tends to lake longer. We humans can do a lot in little time.

Humans: On this planet we change things the way we think things are better. Sometimes correctly, sometimes wrongly.

Sand Stormes: If you live near a sand desert or dunes, with strong winds that sand will not stay in place. Not sure if is fast enough for your needs.

Another example (perhaps better for the OP) is the sudden draining of Lake Bonneville (http://en.wikipedia.org/wiki/Lake_Bonneville ), the remains of which are the present day Great Salt Lake & smaller lakes in the area. It lost the top 300 ft (100 m) or so in much less than a year. So one month you have lakefront property, then suddenly you have mud flats.

You could even design a reverse system if you play with geography a bit. On your continental divide is a Lake Missoula analog, which drains east because the westward drainage is blocked by ice. On the west is a closed, dry basin like the present-day Salt Lake basin. The ice tongue ruptures, and within weeks your dry plain is covered by hundreds of feet of water.

In either case, you're in trouble. There are means both to add and subtract altitude, but they both involve a lot of generalized energy which is hard to miss if applied over a short time.

Mountains can be created in two ways: volcanic eruption and thrust faulting. Volcanic eruptions can provide fairly rapid mountain building, but this is accompanied by earthquakes and major emissions of ash and/or nasty fumes. Thrust faulting (such as created the Rocky mountains) produces even worse earthquakes than volcanos do.

At the other end, floods can make major changes in landscapes, the most massive event known in the US being the creation of the Channeled Scablands. This produces quite distinctive landscape features, and the limited existence of such features is very strong evidence that the Biblical Deluge did not happen. But again, you're talking about really massive incidents, and such things would be noticed locally.

More in line with what I think you're after, rivers do change course spontaneously, and this can occur without too much fuss. Oxbows can short-circuit in a matter of days, producing new islands. At fairly large intervals (say, a thousand years) you can get a really major change in river course as a river "falls off" its delta. As a matter of fact, the Mississippi river is overdue, and only massive efforts by the Corps of Engineers have prevented the Atchafalaya River from leaving New Orleans cut off from the river.

meteors, coronal mass ejection at a planet with no atmoshpere, massive floods (for example look up channeled scablands, WA(created in moments by a flash flood)) massive landslides. overheating of the core causing softer crust and faster convection in the mantle accelerating tectonic movement incredibly. also hotspots create land somewhat quickly, like hawaii and the aleutian islands

Not the answer you're looking for? Browse other questions tagged geography extreme-terrain .

2
Could the shape or geography of the continents be dramatically changed in a roughly short span of time?

11
How does the age of a planet impact terrain?
20
How large can a volcano be?
1
How can I keep an area next to a mountain range from being a desert?
1
How would the terrain of a snow-covered mountain deter a mechanized army?
36
How Would Civilisations on Different Planes of a Cube Planet Interact?
26
What would keep traders away from a specific area of the ocean?