Is it possible to use Venus' temperature to generate electricity, and how would the electricity be transferred to Earth? 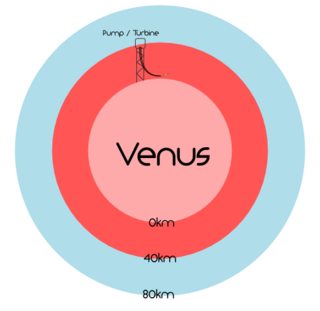 So would this work: 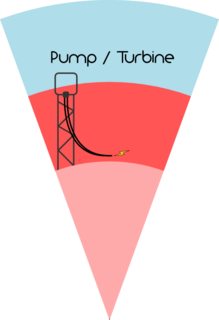 Water is heated to gas, goes through turbine and makes electricity and then gets pumped back up and cools to liquid and then the cycle goes again.

Would this create energy without using more than is required?

Next question, how would we get that energy back to Earth? I have a semi-idea:

This is a horrible idea, not because it wouldn't work (there have been similar power-generation schemes in Earth's oceans) but because the atmosphere of Venus is hellish: it's made of sulphuric acid and winds blow at hundreds of miles per hour.

There's hardly a spot in the solar system less friendly to a water-containing turbine system.

If you have the technology to put all those materials in orbit around Venus and somehow drop them into the atmosphere (float them?), just use the same resources to build a bunch of space-based mirrors and/or solar panels. You'll get way more power, with way less trouble.

This would actually work as you describe (assuming all your material/technology requirements are met, as you do). However, there is a practical issue. Unless you have some super-high-density energy storage medium, you will probably be beaming your energy back as a maser or laser (also as you describe).

Let's stop and think for a second. Where is the energy to support that atmospheric temperature gradient coming from? The Sun of course! The Sun heats the planet/atmosphere, and the heat is trapped by the greenhouse effect. This effectively makes your power-generation scheme a roundabout solar generator.

If you have the technology to efficiently convert your energy beam into usable power, then you also have the technology to efficiently convert raw sunlight into power. Solar panels will be much more efficient at generating power: the theoretical limits are somewhere around 50%, while the thermal efficiency limits on a thermal engine with a hot-side temperature of only 100 C (assuming a cold-side temperature near 0 C) is much lower, around 25% (even discounting the mechanical and secondary conversion losses).

It is possible however a horribly inefficient use of materials.
Venus' atmosphere contains 96.5% CO2, 3.4% Nitrogen and other gasses with the major one being, sulfur dioxide.
The atmospheric pressure is also 93-98 times more than earth, the same as being about 1km underwater. A probe has been crushed 18km above the surface.
Also, the surface temperature is 450 degrees celsius which can melt lead so goodbye cheap radiation shielding.
And the nice fluffy clouds you see are sulphuric acid.

As you said we have such materials but would it not be easier to build something that is efficient?

If you want to build something that needs to get a lot of energy then I would suggest building a massive solar array in space because it will require less maintenance, is a lot more "human" friendly and probably costs a lot fewer resources.
To send the energy back to earth you could:

If you are however determined to build on venus I would suggest:

Bonus point:
Theoretically you could terraform the planet to suit your need but this would be very expensive but afterwards, could be used as a hospitable colonization for humans without needing to transport the energy.

Even with the assumptions you made this is still not a good idea.

What you described probably wouldn't work. I might be mistaking but it sounds like violating 2nd law of thermodynamics. In geothermal plants on earth pressure is not as high as Venus. Maybe do a bit more research on geothermal electricity.

There is another way however that you can generate electricity on Venus. By directing convection flows. Have a look at solar updraft towers

But these are very inefficient method for electricity generation. The more I think about it, it makes no sense to generate electricity on Venus. And there are a lot better ways to do in earth orbit or moon.

If you want to have a factory on Venus and want it to make sense scientifically, why not some floating factories extracting minerals (maybe sulfur) and shipping them to earth.

Have a look at Venus floating cities. The air in the city is less dense than Venus atmosphere so it floats.

Not the answer you're looking for? Browse other questions tagged planets energy water electricity temperature or ask your own question.

32
Can we 'beam' energy from the moon?
4
Using lasers to transmit solar energy
6
Can gamma radiation be used to generate electricity on earth?
0
Generate electricity using altitude and pipe
0
If all the water on earth were to be displaced into the atmosphere creating a water canopy, how thick would it be?
0
Energy planets, how to get the energy off it in an economical way
5
If the solar panels on a spaceship were able to convert gamma rays to electricity, how much more power would it produce?
3
Temperatures and water level during very long eclipse
7
Can a rogue planet have a habitable surface due to geothermal heat?