I have a spherical spaceship that is about 2 kilometers in diameter with an outer clear, yet strong shell. This spaceship is largely made up of empty space occupied by air. Aside from this the spaceship has concentric rings that spin to produce artificial gravity on the surface of the rings. Ignoring other problems, what sort of air currents would be found inside the ship?

Edit: Also assume that most of the heat found in the ship would come from nuclear powered engines at the core of the sphere. Also the ship is largely used for scientific expeditions, with the ring surfaces being home to a living biosphere

If we disregard the rings, it's a globe full of air at a constant pressure, with a central heat-source.

So the nearest analog is probably the convection current systems of our own planet core.

You must have seen the diagrams of them in high school. Just scale it right down in size and temperature, air moves more easily, but the temperatures are smaller, so all in all there'd be some air movement but I doubt it'd be particularly noticeable as more than a breeze as warm air reaches the skin of the globe, cools off conductively and is forced aside by more warm air moving outwards.

The real kicker will be the existence of a massive fast-spinning (Spincalc says 140mph) ring with terrain, acting like a turbine and producing a distinct air current of its own.
The Wind-shear is going to be a doozy. I wouldn't want to be flying an aircraft anywhere near the ring.

For a radius of 1km you will have a tangential velocity (at the outer edge of the ship) of about 350 km/h. For comparison the Earth's tangential velocity at the equator is 1,674.4 km/h. On Earth the principal effect of this rotation is the coriolis effect, which causes polar wind currents to effectively curve in the opposite direction of the rotation of the Earth. If it weren't for this rotation, wind currents would mostly be North-South due to differences in temperature/pressure.

For your spaceship, if it is made of disconnected rings, there would be little effect - an air current would only be felt if the rotational velocity is changed. The air in the ring would reach a similar velocity as the ring itself due to friction.

If the rings are "open" to the rest of the ship then you will introduce significant wind shear - as you get closer to the surface of a rotating ring the wind current will increase up to more or less the same velocity as the ring itself (it depends on the width of the ring).

If the ship is not perfectly symmetric, there would also probably be convection currents with air being kicked up by the ring reaching the reactor at the center, heating up and being accelerated back towards the surface of the ship.

I made a shitty ms paint of what the current might look like, looking at a ring from the side. It depends a lot on the actual topology and temperature gradients, and I could be completely wrong since this is not my area of study. Depending on geometry you could also end up with a convection current that is perpendicular to the rotating ring. 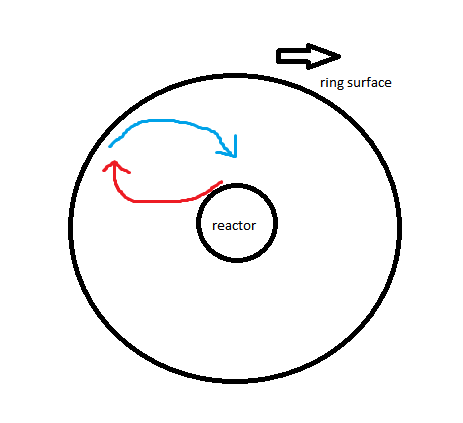 Since the ship is relatively small, though, I would not expect air currents (as felt on the rings) to be comparable to strong winds on Earth. With only 1km in diameter your air would all be moving at similar velocities due to friction with itself. Multiple rings at different radii (concentric rings, not sure if that's what you really meant), could complicate the issue. However, if you designed the ship so that all the rings are on the same plane, your air would actually move more in unison. Of course if you stepped off the ring onto the static surface of the ship, you would feel a very strong air current in the direction of the rotation, kind of like standing right next to a bullet train as it passes at full speed.

edit: reading other comments, perhaps "convection" is a misnomer for the flow caused by differences in pressure - although there is an effective gravity in this scenario due to centripetal force, so I am not sure.

Not the answer you're looking for? Browse other questions tagged technology physics or ask your own question.