I have a colonized asteroid that is roughly spherical and has been hollowed out. To create artificial gravity I spin the asteroid creating a strip of 1g gravity around the "equator". What would happen as I walk towards the poles? At the poles is there any effect at all?

What would happen as I walk towards the poles?

As soon as you leave the equator you are walking uphill. The slope gets steeper and steeper until it becomes a vertical cliff at the poles.

At the same time, the higher you climb, the weaker effect of the spin-induced gravity.

The artificial gravity effect is proportional to the radius times the square of the rotation rate. Whatever the size and spin of your world, as you climb the gravity effect falls off evenly with altitude. Note however that altitude increases more slowly near the beginning of your climb.

This diagram charts the changes in slope, altitude, weight, and climbing difficulty as functions of distance along your journey. 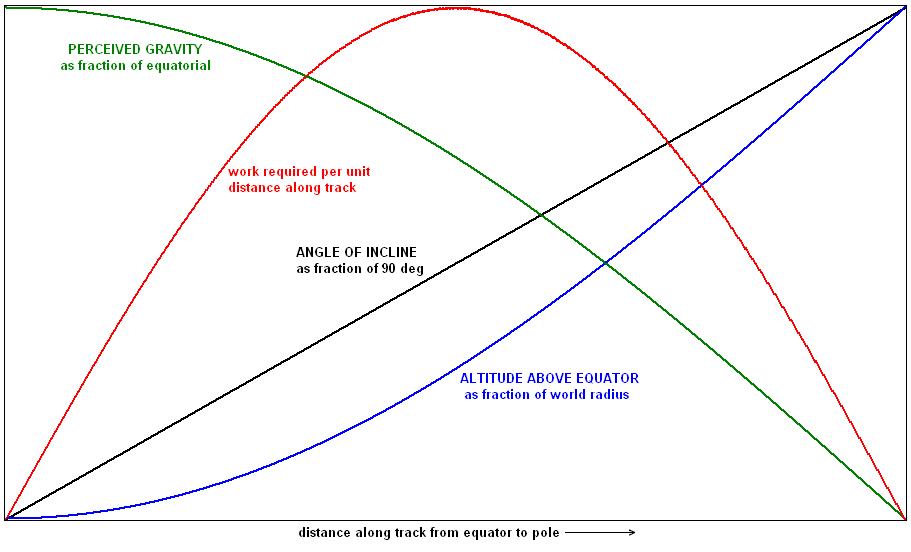 I assume you had the foresight to install a funicular rail, or at least a ladder, to the pole, so I have defined climbing difficulty as the work required to move a unit distance along the track of your climb.

As you would expect, you will encounter maximum climbing effort at the middle of your climb, while the beginning and end will be dead easy. The interesting fact is the symmetry of the difficulty curve. Before I did the math, I thought the effort would be skewed toward the end of the climb.

At the poles is there any effect at all?

The spin-induced gravity effect is zero at the poles.

You would be hard pressed to get to poles, you would need to use equipment for that.

As you go towards poles you would feel how centripetal acceleration gets weaker as you get closer to rotation axis, at the same time floor would "transform into" slope >>> steep mountain >>> cliff.

Lower gravity will make it physically easier to climb all that, but at the same time you would loose traction and make it super easy to launch your self off that slope. You can use climbing equipment, suction cups, rope tracks or other help, dependent on suitability for your case.

If you get to the pole, you would slowly spin in zero-G, don't forget a safety rope or means to land safely(parachute, glider), as should you shift your center of mass off axis you will start your drop into that direction.

Make note, be careful with spinning asteroids. Most of them are rocky, uneven, with a lot of defects. Hollowed asteroid will tend to fly apart. So You would need to make a lot of work to strengthen it, deal with pockets of volatile substances, especially, around equator.

Metallic asteroids are a thing and metals are way superior in tensile strength.

You would have zero gravity at the poles if you chose to only spin it around one access. one way you could potentially fix this is by having the asteroid spin to create a band of 1g along the prime meridian as well as the equator. it might be a little chaotic, but it would solve the gravity problem at the poles

Not the answer you're looking for? Browse other questions tagged physics space .

3
How does gravity change between points within a spinning sphere?

12
What would the weather be like in an asteroid habitat?
4
How to make a planet with differential gravity and constant daylight
4
What's a good method for generating an artificial gravity field for both the exterior and interior surfaces of a hollowed asteroid?
1
How would fast rotation affect gravity?
29
5km artificial planet, with same gravity as on Earth
4
Asteroid in the asteroid belt suddenly gains the gravity of the earth
3
What kind of air currents would be made in and around reverse-gravity bubble fields?
6
How fast would the Moon (Luna) need to rotate so that anyone living in Lunar underground habitats would experience Earth-like gravity?