What type of feet should semiarboreal humanoids have?

My semiarboreal humanoids have a build quite similar to humans, apart from some more specialized arboreal adaptations. They live in rainforests quite similar to the Amazon Rainforest. Though trees are important to their foraging and structures during rainy season, they still need to run or at least walk efficiently on the ground, as they travel long distances, gather certain materials, and hunt there.

To go more into depth, humans have arched feet to assist in bearing weight bipedally. My humanoids are bipedal as well, but they spend a tad less time on the ground then humans, yet less time in trees than chimpanzees. Chimpanzees do not have arches. Some studies have results that would suggest human and chimpanzee feet have similar climbing capabilities. The previously linked article mentions:

But my takeaway from these two studies is that if we were not shod and walking on hard floors and streets all the time, our human feet would easily be able to work like Chimpanzee feet.

Comparing the gaits of humans and chimpanzees, chimpanzees 'hobble', likely because of their bowed legs, but their feet may affect their gaits as well. In looking for a foot design that can both climb well and walk well, I have considered a combination between a human-like foot and a chimpamzee-like foot. My questions regarding such an intermediate are:

My guess is that the species I am working on should be able to walk on the forest floor more efficiently than chimpanzees, but likely not run as fast or for as long as humans.

Edit: To clarify, I would like to say that I am looking for feet that would allow them to stay in trees securely as chimpanzees or gibbons do. They should be able to rely on their feet for stability on branches while reaching for things or eating briefly. 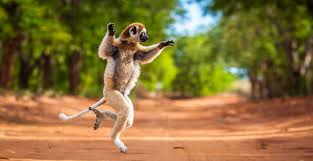 The following video shows a lemur both progressing along the ground and leaping into a tree.

You'd want an Ardipithecus like creature, possibly similar to an A. Ramidus which I shall hence forth call "Lucy" after the first known specimen and because these names are rough on me to spell correctly. Lucy is closely related to humans and chimps, but occurred well after the two species diverge. Lucy is believed to have spent about equal time in trees and the newly emerging Savannah plains, thus had a more dexterous base to assist in climbing but with the non-thumb digits resembling something closer to a human foot.

Bipedalism is thought to have evolved to allow homonids (of which, Lucy is not one, but close enough) to see over tall grass of the flat lands, which provided early warning against quadrupedial predators and early intelligence on prey animals. Human hands developed to provide carrying of food at a more energy efficient travel capacity to a quadrapedal locomotion like a Chimp.

This could easily have evolved if your species evolved in a edge of Forrest environment bordered by a savanna plane. Although you asked for feet differences, your more immediate noticable difference would be the arms which would be longer than a human's and possibly be equal length to legs or at least closer to that. As noted elsewhere, the legs of humans are sufficient enough for this lifestyle as climbing and general aboreal locomotion were typically upper body strength activities, not lower body activites. Consider such human actions as the hated gym activity of the rope climb or the playground equipment of the monkey bars and compare to a fellow great ape climbing a vine or tree, or swinging though branches. In fact, the latter action gets its name from the movement of primates through trees, as the actions use the same physics. Humans have generally short arms compared to primates because our evolution occured due to a decline in trees, but this is a slight disadvantage to humans at best. In fact human hands are unique in that every muscle group in the hand is found in another extant primate but no extant primate has all the same muscle groups of humans. In fact, when compared, great apes have an average throwing speed of about 20 mph while an average human can achieve speeds over 3 times this, and can get close to 5 times a great ape's throw speed if trained (Professional Baseball pitchers can easily clock speeds in the high 90 mph range)... the advantage of this being that most savannah land animals are not anticipating the devistation of a rock moving at 60-70 mph striking them in the head, even less so when they think predators can't see them in the tall grass. Suffice to say, human climbing skills are more than sufficient to primate climbing skills to allow a trained human to sufficently climb like an ape. The foot changes would only allow for better utility, and even then, not much... mostly it would work to stabilize the body better while reaching for the next thing to pull yourself higher and possibly carry loads upwards. Even then, it's only a slightly better advantage as many humans (including yours truly) still retain surprisingly dexterous toes to sufficiently grip items and manipulate them while standing on the free foot (my use typically extends to picking up items on the floor that I'm too lazy to pick up, but I once attended a concert by a guitarist who, do to some mishap, had lost both arms... but had learned to use his feet to sufficiently play quality music... better than I could my hands... but I'm a terrible musician so... take that into consideration.).

Cats and other animals climb very efficiently with clawed feet. They do however present their feet to the tree inline with the surface which allows for curved claws to engage the surface and the weight to hang from them, they basically turn from horizontal walking through 90 degrees to vertical walking up the surface. If you want your humanoids to be able to walk efficiently on the ground as well as climbing an ankle that can rotate to both positions may not work.

Many of the provided answers are correct in that human feet are efficient enough at climbing trees. In that context, Mathaddict's answer is correct.

However, you should also consider these people's ability to live in trees: navigating branches, being able to easily keep themselves from falling while doing other things, ...

To easily navigate treetops and prevent falling out of trees, you need appendages that are good at grasping branches, which is going to require being able to grasp around a branch. Human feet do not arch enough to actually allow for this. If your people have human feet, they will have to balance on the branches instead of being able to rely on grip strength. Or, when they need to rely on grip strength, they will have to use their hands, which means they don't have their hands free to do other things.

Taking that into consideration, I don't think you can get away with using human feet. However, there are several ways to resolve this conflict:

Suction on the feet

You don't necessarily have to use chimp feet to climb. The hyrax is great example of this. Their feet have thick, rubbery soles that are moist, and lift up in the center to form a suction cup. In this way, you could have feet suited to climbing without damaging ground maneuverability. you would actually increase it, as feet with curves like that would help with handling different terrain, and would not just be limited to climbing trees, meaning that you could create variants of this species or race that are able to handle mountains and rocks as well as trees.

Not the answer you're looking for? Browse other questions tagged creature-design evolution humanoid .

5
Anatomical Review: Would the way I designed this semi arboreal Imp be biologically feasible?

16
Is a four armed arboreal reptile as described viable?
22
Under what conditions would humanoids evolve eyes in the backs of their heads?
5
Could Naga Reload Muskets while Marching?
19
What type of claws should my trolls have?
5
Type of feet for large creature in shallow freshwater
5
Anatomical Review: Would the way I designed this semi arboreal Imp be biologically feasible?
3
Could a human sized creature with a skeletal structure similar to a gibbon's be bipedal?