Are there any software tools available to map the solar system hundreds of years from now?

I am writing a scifi novel based roughly four hundred years from now, and it occurred to me that the planets and other objects might not be quite where I need them to be for certain travel details to make sense.

Primarily, Eris and Pluto have irregular orbits that take a very long time (558 and 248 year respectively), which sometimes puts Eris closer than Pluto. This is a problem if I write that Eris is the last stop before exiting the solar system if Eris is at ~38 AU (perihelion) and Pluto is at ~49 AU (aphelion).

Are there any software tools available to accurately map the solar system hundreds of years from now?

JPL's HORIZONS system will give you ephemerides, charts of a planet's location in the sky (via right ascension and declination) and position in space via quantities like the true anomaly. You can find ephemerides for all eight planets, as well as about 800,000 asteroids, comets and moons (yes, including Pluto and Eris).

HORIZONS is quite accurate, and allows you to make calculations in a variety of timesteps (and shows you intermediate positions along the way!), ranging from days to years. The shorter the timestep, the better the accuracy, but the longer it takes. Usually, it can calculate ephemerides for up to 500 years in the future.

There are a number of interfaces, with the simplest being the web one. Pick the option that suits you best.

The Universe Sandbox has the ability to simulate planetary physics. I doubt that it is 100% accurate, but as a tool for projecting a future it may fill your need.

Alternately, the math for working out roughly where a planet is in its orbit is not overly complicated. Find when their next perihelion/aphelion will occur, and simply add the time required to complete 1 orbit. Another nice thing about perihelion/aphelion is that the planet takes about half the orbit time to go from one to the other.

https://celestia.space/ is what you need. Wikipedia suggests that NASA and the ESA use it for education. It's open source, and it is available for AmigaOS 4, Linux, macOS, and Microsoft Windows. Plus there's a heap of add-on's if you know where to look.

The combination of Real Solar System and Principia mods for the commercial game Kerbal Space Program provide planetary motion for the Solar system, giving correct eclipse dates and times for a least a few centuries into the future. The game is inexpensive (under $50), and the mods are free downloads. The lesser bodies (minor moons of Jupiter and Saturn, lesser asteroids) aren't covered, but unless you need to know where Gaspra will be, that isn't likely to matter. Ganymede and Titan will have correct "eclipse nights" well into the future.

I might recommend Space Engine. Some description first, then my own thoughts.

SpaceEngine (stylized as "Space Engine") is a proprietary 3D astronomy program[2] and game engine developed by Russian astronomer and programmer Vladimir Romanyuk.[3] It creates a three-dimensional planetarium representing the entire universe from a combination of real astronomical data and scientifically-accurate procedural generation algorithms. Users can travel through space in any direction or speed, and forwards or backwards in time.[4] SpaceEngine is in beta status and is currently freeware for Microsoft Windows.

Here's a brief blurb from the site:

The key points are 1) it's windows software 2) that's free 3) which gives an accurate simulation of known celestial objects and 4) fills in unknown data with procedurally generated objects.

It's not a pure 100% physics simulation. For instance, the sun won't go red giant and consume the earth after a few billion years. Wikipedia also points out "stellar proper motion is not simulated, and galaxies are at fixed locations and do not rotate." (I think I tried to simulate the Andromeda collision, but that won't happen) But the positions of planets should be accurate, especially in the time frame you mention.

Things I like: you can travel around the universe at various speeds. Anything from 1m/s to AU per second. You can travel to a moon and watch the planet-rise. You can control the FOV and camera projection. You can change the timestep (very slow or very fast, anything in between), or jump to a specific date time. And the physics don't get wonky at increased speeds, like they do in Universe Sandbox. There are user addons and some official expansion packs, like high detailed maps of the planets in our solar system.

Things I don't like: The UI is rather deep, it has a steep learning curve. Like a lot. You're going to be in the manual trying to figure out how to do simple tasks. Grab a piece of paper and make a cheat sheet. Also, it's still in beta, there are a few glitches you will encounter sometimes. Off the top of my head, I remember an issue when switching between camera projections a lot, and the space ship movement has some weird collision issues.

Other thoughts: The last version was released a couple years ago. There's a new updated planned "soon" which will be $20 on steam. I only mention the price to say the author has stated the old versions will continue to be free, and these already have quite a lot of capabilities. You can see a lot of user discovered screenshots at https://www.reddit.com/r/spaceengine/

edit: Sorry for the delay, here's a screenshot of Eris in the year 2347 (just fast forwarded a bit to no date in particular). 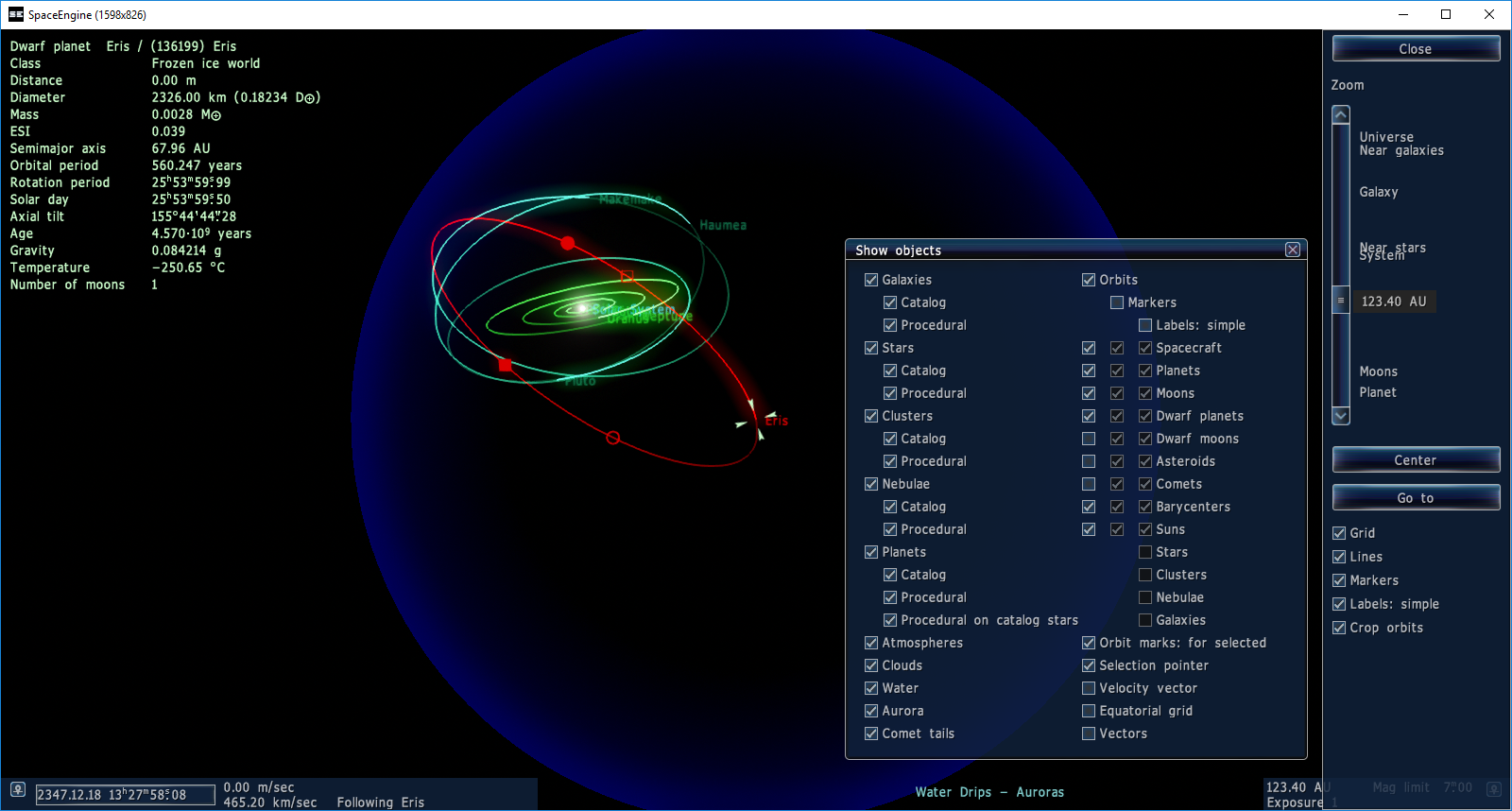 Here I've turned on markers for comets and asteroids 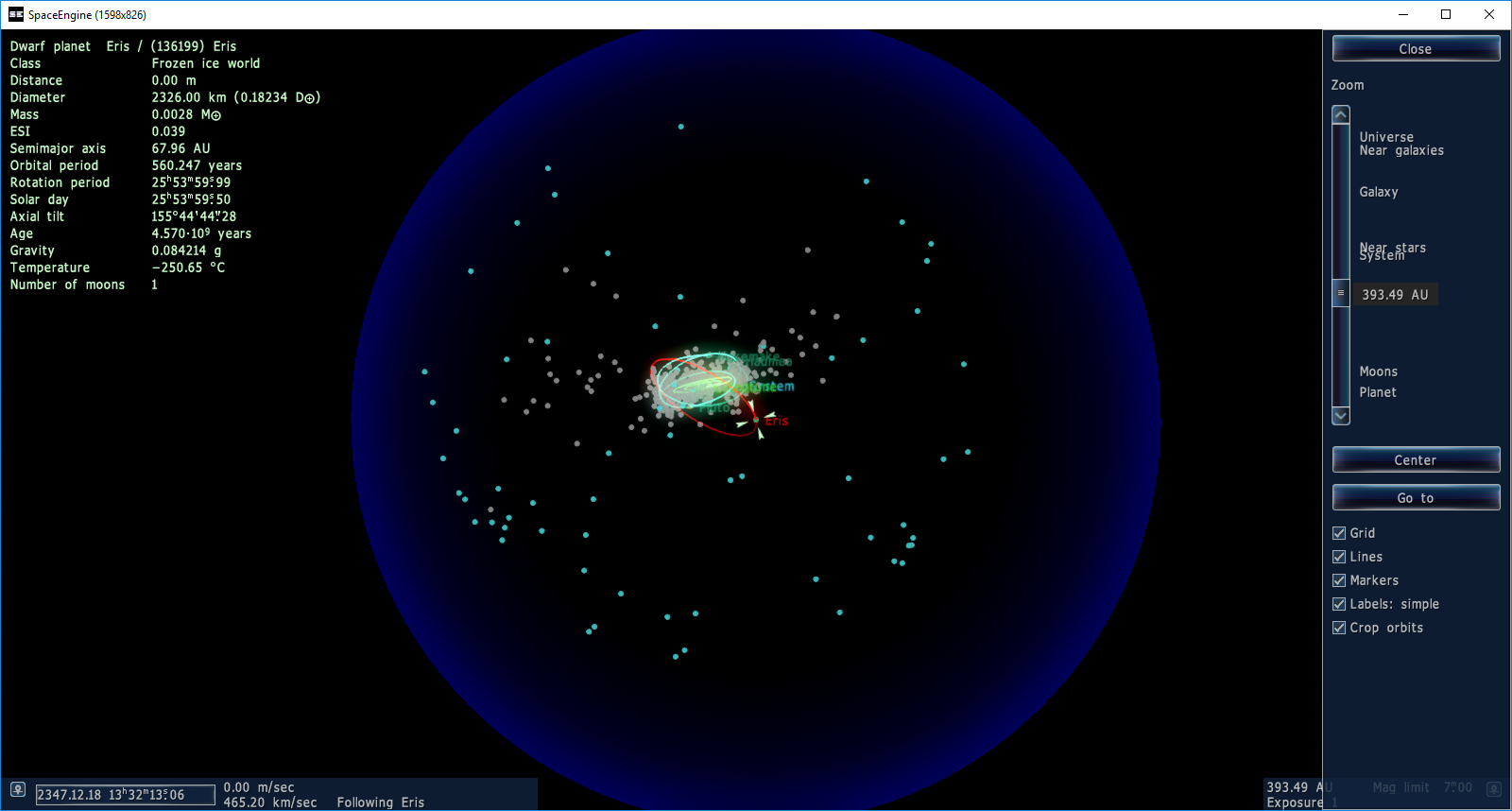 4
How This Alternate Solar System Influences the Milankovitch Cycle
12
Two planets in a stable horseshoe orbit?
10
How would this tidally locked planet be affected by its moon and would the moon have a deaccelerated orbit?
11
Is there a software (preferrably free) that can help me make a map from a preset land mask?
5
What would be the impact on Titan, Saturn and the Solar system if aliens harvested as much hydrocarbons as possible from Saturn's moon?
10
What sort of acceleration would I need for my space ship to reach Eris in 3 months
3
After surviving a black hole/wormhole, what are the chances of Earth start orbiting in a new solar system?
4
Are there any tools that people use to generate borders during alternate histories?