EDITED to address the above suggestion. See below. 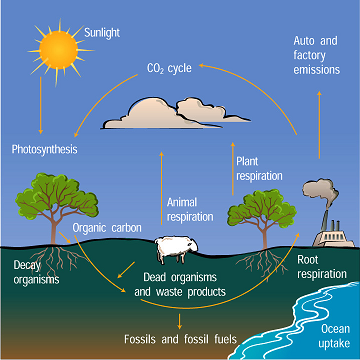 Most animals breathe in oxygen and breathe out carbon-dioxide.

Most plants take in carbon-dioxide and release oxygen.

Waste products from animals fertilise the soil and enable plants to grow.

Plants are eaten by herbivores.

I'm looking to create a world where this cycle is abbreviated.

When an animal eats enough vegetation it puts down roots and becomes a plant.

When a plant absorbs sufficient nutrients it metamorphoses into an animal and starts walking around.

This previous question is similar in some respects -

A plant/fungus and an animal that form a single species?. However the question there is, "How feasible would this be to evolve? What selection pressures would promote this adaptation? The ancestral organism doesn't need to be an animal."

I am not interested in evolution or selection. I want to know about the mechanism of metamorphosis.

Specifically what biological mechanisms would be needed for a photosynthetic plant to metamorphose into an oxygen breathing animal and vice-versa?

On Earth, plants and animals are pretty distinct from each other. But there's no physiological reason why you can't combine their traits. After all, the major difference between plants and animals is that plants have chloroplasts, which they use to photosynthesize. Stick some chloroplasts in an animal and give it the necessary cellular mechanisms to support them, and the animal can photosynthesize as well.

The reason why plants and animals are separate kingdoms is because getting energy from the sun and getting energy from food are two very different lifestyles. Most importantly, photosynthesis does not provide a great deal of energy, and the best way to get more energy through photosynthesis is to grow outward (exposing more surface to the sun) and upward (outgrowing other competing plants) - both of which will make moving around even harder. So plants don't bother evolving a means of active transport, since it is counterproductive for them.

An animal could gain some extra energy from photosynthesis, but it's negligible compared to the amount of energy animals can get from eating, and made even more negligible by the fact that growing in a plant-like manner (upwards and outwards) would make motion awkward. Among animals that do have a sessile, more "plant-like" lifestyle - corals and sponges - it is fairly common to form symbiotic relationships with algae, but among more mobile species it's basically pointless.

An animal might gain more benefit from photosynthesis if it was entering a state of hibernation anyway. The problem with this is that the main reason why animals hibernate in the first place is due to lack of food...and the reason why there is a lack of food in the first place is usually because the conditions are not optimal for plant growth. So there's not much point in turning into a plant yourself.

There are several animals that begin life in a mobile state and become sessile when they get older. The sessile state would then be free to grow outward like a plant, and would benefit from photosynthesis. But very few animals go from a sessile back to a mobile state - from a survival-of-the-species standpoint, it makes a lot more sense to just reproduce after reaching that state. This is especially the case if the animal grows much bigger once settling down, which would likely be the case if it was turning into a plant.

Any niche that offers an advantage to freely changing from an animal state to a plant state would likely be very situational, and is unlikely to exist for long enough to spawn a whole new class of organism. But symbiosis between existing plants and animals is somewhat easier to evolve, and it is easier to see that happening. There are some aquatic flatworms that harbor photosynthetic algae, for example.

If there were to be a hybrid plant-animal, I would expect the animal to have some kind of expandable structure that would allow it to easily expose a large surface to the sun on short notice. Many reptiles have structures like these in order to warm their blood - neck or dorsal frills, for instance. Putting down roots would be unlikely, as this would require a far more drastic physiological change, but perhaps the frill could grow bigger as conditions became more "plant-friendly". Under certain conditions (maybe after insects have eaten a large amount of plants in the area, so there is little available food but ample resources for a plant to take advantage of) the animal could burrow partially into the ground, enter a hibernation state, and adopt a plant-like lifestyle for a while. If its frill got too big, it would make active motion awkward, so perhaps it would "shed" the excess frill when changing back into animal-mode.

You want slime molds - I'm afraid that this may be another case of "nature did it first". Let's look at this amazing life cycle of a cellular slime mold (the picture somewhat simplifies it, and ignore the "plant-like, animal-ish" bit - it is irrelevant to the animal and plant stages of the life cycle I'm proposing here) 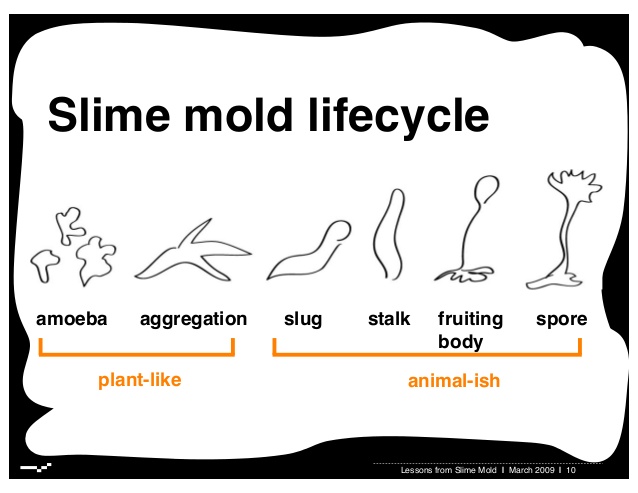 Slime molds begin like as free, amoeba-like cells. At some point, these cells aggregate until they form a mobile, almost multicellular entity known as a slug. This slug eventually affixes itself to the ground, taking on an erect stalk-like form. Then, this stalk turns into a fruiting body called a sporangia. The sporangia bursts and releases spores into the air until the life cycle begins again.

Now, we can modify this to suit multicellular animal-like life forms. Instead of having many cells aggregate into a slug, just have the animal replace the first three stages. This animal will affix itself to the ground by whatever means, and then in its new sessile body switch to photosynthesis. It could perform photosynthesis by using chloroplasts "stolen" from the plants it eats - this explains the "when the animal eats enough vegetation" part.

Switching from inhaling oxygen to inhaling carbon dioxide is fine - again, nature did it first. Plants inhale oxygen during the night. The only modification that the slime mold template would make to your idea is the part where the plant turns back into an animal during its lifetime - I believe a more reasonable idea would be that the plant gives birth to animals and the animals are in fact a larval stage of the plant.

Since your goal here is to shorten the carbon cycle and have the same organism both fix carbon and respire it, it’s probably worth noting that plants already do this to a lesser extent.

Plants have both chloroplasts and mitichondria, and rely on both photosynthesis and cellular respiration for energy. During the day, when there’s plenty of sunlight, plants perform photosynthesis and fix carbon in massive excess of what try actually use - that’s how they grow. Once the sun sets, however, and the dark reactions have used up there starting materials, plants stop producing oxygen and instead consume O2 like the rest of us.

This means that it’s easy to imagine a plant-like organism that’s perfectly balanced, producing exactly as much O2 as CO2 and cycling that carbon indefinitely. Perhaps the sunlight is too weak to support the plant, or perhaps its performing some energy-intensive activity that requires it use up all the organic sugars it creates. These plants would be unusual because, unlike most plants, they would stop growing and remain the same size the rest of their lives.

The problem with animal/plant is that you are talking about two of life's kingdoms. But that specifically refers to the taxonomy concept for life on earth. On earth, there is a very high-level separation which reflects millions of years of separate evolution, going back to the earliest multi-cellular life. On your planet, these species do not cross taxonomy borders - that's now how species work. Instead, the species on your planet are organized in their own tree of life, with their own genera, phyla and kingdoms. And we may assume there is one kingdom which holds these "hybrid" species

So, we can also assume we are not stuck to peculiarities of earth's species. Let's assume this biology is still cell-based. But details of the cell membranes? Do we need to tell the reader anything specific about them? The only reason you might mention cells is because it makes story-telling easier.

As for the mechanism, perhaps the easiest solution would be a symbiotic relation. Let the plant-like aspects be provided by algae that grow in or on the host. In the plant-phase, the animal cells release unneeded proteins so that the algae can grow, and vice versa.

Not the answer you're looking for? Browse other questions tagged science-based reality-check xenobiology life carbon-based or ask your own question.

6
A plant/fungus and an animal that form a single species?

26
What if an Earth-like planet had no axial tilt? (impact on ecosystem)
24
What effect would liquid sulfur oceans, sulfur dioxide in the atmosphere have on visibility, sound propagation and other environmental information?
5
What compounds would be required for a photosynthetic reaction resulting in flourine gas?
4
Looking for a review of my tidally locked red dwarf planet system specs!
6
Ecology with methanogenic respiration
4
Could Sharks Survive a Longer PETM?
7
Evolving to breathe both oxygen and carbon dioxide
3
What would the atmosphere of the Archaean Earth look like? (Before massive oxygenation)