Get trapped for a long time without food [closed]

A group of people get trapped in an unknown construction. Uninhabited. Nobody takes care of the place. There are no living creatures around.

They cannot find the exit for three weeks.

Desciption of the place: This is a construction by an alien sentient race that does not know humans. It's a vast closed place with no exit and no food lying around. They get lost and spend about three weeks time wandering.

It's a alien projection of what a human lodging might look like. It includes artificial and natural elements, as a mish-mash of wooden corridors, cave tunnels, and passages that don't resemble much here on Earth.

There is magic in this particular construction. The world around isn't exactly magical (at least not the type of magic humans can use), so the characters are unfamiliar with the setting, but in the construction weird things can definitely happen. This is how they can't find an exit for three weeks: the corridors keep changing and making wormholes, so it's impossible for them to trace back.

The reason why there is no food lying around is because it is not built for humans. Instead, the aliens built a model, sort of a decoration, so they wouldn't put human food in there on purpose. Even if they wanted to, the aliens don't have a concept of what a human needs to survive. It is meant to imitate the elements you could find around humans (such as structures of buildings and natural structures), but there wouldn't be details you find in humans' daily lives.

There could be sparse water sources or other ways for the humans to get water, for example: open roofs, ponds, magic streams, etc...

Outside the construct, there isn't anything extraordinary. It's standing on a grass plain not far from a large city.

Question: Given that there is no evident source of food, what element could be found in such a place that would either nourish a group of humans, or give them an alternative source of energy?

(So as not to make the question too broad, assume that water is not an issue).

The main issue for them will be water. According to this website, you can live for weeks, even months, without food (as those on hunger strikes do), as long as you have access to water. The effects of dehydration are serious and fatal, and far faster than starvation - a matter of days (though it depends on various factors such as age, height, weight, sex, etc. as to exactly how long you’ll last).

If your castle is abandoned, perhaps derelict, they may be able to find an open roof - too high for them to climb out of, but with access to the sky for them to collect rainwater, for example.

I’d advise your explorers to make finding water a priority, and once they’ve sourced that, staying as inactive as possible to conserve energy, until the castle lets them out again.

As K. Price said, water is the most pressing issue.

Once you've got a source of drinkable water figured out, you can dolve the food problem through cannibalism. According to XKCD What If no. 105:

If the average human weighs 50 kilograms and eats a couple thousand calories per day, then—according to Ryan North—then one person contains enough meat to feed another person for about a month.

So if half the team eats the other half, you've got some 30 days of provisions.

How much they can last in this scenario depends on the size of the team. A group of $2^n$ people will last $n$ months, i.e.: 16 people will last 4 months, with the last cannibal running out of food at the end of the fourth month.

According to the Rule of 3s, you can survive

None of which will be very pleasant.

The main problem your explorers will have is water. With rationing (assuming they realise they're locked in within a day), they can eke out their food so they don't feel starving. If there is water dripping through the castle's roof, then they should be able to catch it in their canteens. If they have pan or other containers with a larger surface area, then this is easier.

Assuming this castle isn't located in the Atacama Desert, water shouldn't be too hard to find. An old abandonned castle will certainly have wells at least and possibly cisterns with water. Lower levels may be infiltrated by ground water. Catching rain water may also be a viable option.

Food will be much more difficult. The kitchens will be bare and any food left behind will have long ago been eaten by rats, eaten by bugs or rotted away. That said, castles often had gardens. Your adventurers might be able to find some fruit trees or vines (if the season is right), or perhaps some wild onions or other edible herbs growing wild. Not a lot, perhaps, but in conjunction with any rats they're able to trap, will go a long way towards making the little critters more palatable!

Be on the lookout especially for leeks and carrots and onions and big juicy rats. 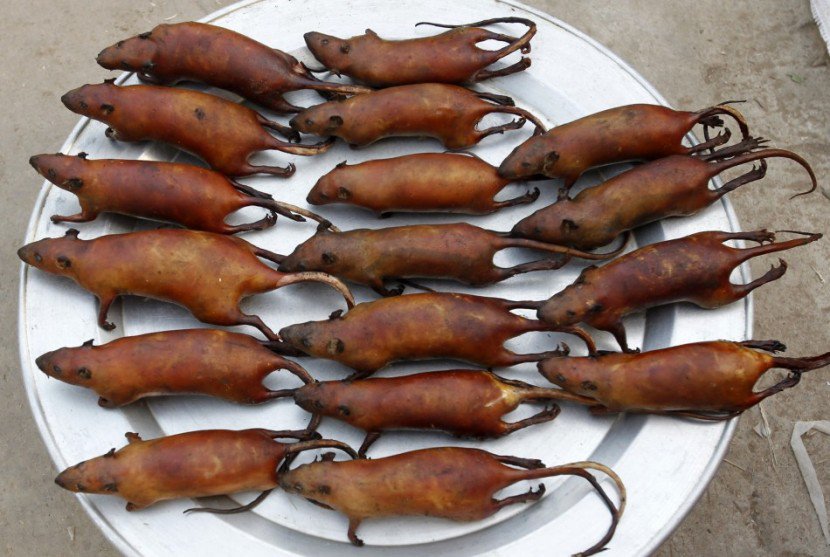 Your adventurers set out with a generous rainy day fund. 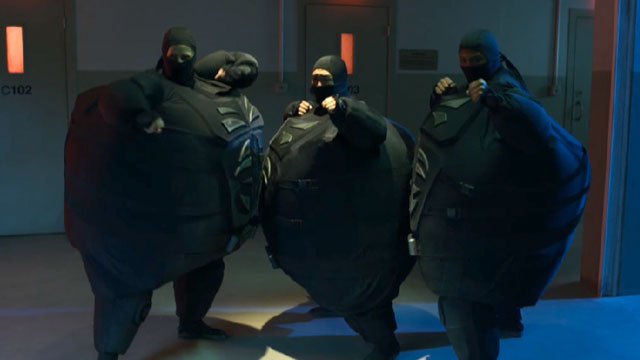 Back in June of 1965, a Scotsman weighing 207 kilograms, described as "grossly obese" and hereafter known only as Mr A B, turned up at the Department of Medicine at the Royal Infirmary in Dundee.

He was sick of being fat and wanted to lose weight by eating nothing and living off his body fat. He told the hospital staff he was going to fast flat out, whatever they said, so they may as well monitor him along the way.

He ended up fasting for one year and 17 days — that's right, he ate no food at all for over a year. He lived entirely off his copious body fat, in the end losing about 125 kilograms of weight.

So too your explorers. These are not buff, lithe athletes with 6-pack abs. These are individuals who have accumulated considerable caloric reserves, and wind up grateful that is the case. A pound of fat has 3500 calories in it, easily enough to fuel a day of moderate activity. 3 weeks is just 21 pounds and each one of this crew has a lot more than 21 pounds extra. They complain loudly along the way, but are in no risk of starving to death over the course of just 3 weeks.

Water is the main issue, they need some source of it, be it rain filtering in through the ceiling or a well or they are done. They can't last more than a week normally. Could they dig a hole in the ground without upseting the condition of emprisonement? They would get exhausted in the process but to find a layer of water would be their last possibility.

Food: it depends on what kind of ecosystem you have down there. Plants without sun are out of the question but you can have fungus. Is there some secret hideout of food for rats to be around? What about soil? If you have worms, you could have some insects like ground beetles, along with centipedes and flatworms. All of these have a lot of protein but they will lack of carbohydrates so they will eat up their muscle very quick. I don't take in account the risk of poisoning.

If the very land is magical somehow I prefer that the castle actually take care of them sometimes. They wander into a store-room and there is food but then the magic re-arranges the room and forces them out.

I'm not sure that 'exploration' exactly applies to a place that does not remain stable, that there is no reliable way to backtrack but if you don't want (most) of the setting itself to be dangerous a lot can be done with this.

And even better if they are from someplace without magic watching a wall morph into a hallway tells them something weird is going on.

Not the answer you're looking for? Browse other questions tagged magic food or ask your own question.

10
How do marrow adders move house?
4
Food requirements for Localised Temporal Fields, at different time velocities?
8
What's necessary for this stratified, flood-prone city to be plausible?
2
Element Handling Justification: Water manipulation
1
Effective 16th century military ration system for particular fantasy race
21
How do dwarves defend their City-under-the-Mountain from a dragon?
19
A food item only made possible by time-freezing storage?