With 12th-15th century technology, is a “vending machine” possible?

Say that I own a business from around the 12th-15th century. My country uses a Silver (or, if you so wish, Gold) currency in the form of coins. I want to make a secure "vending machine" to give out objects in exchange for a certain number of these coins.

Here are the specifics:

My question is: Is this possible, and if so, how would it work?

Vending machines are actually quite ancient. Heron of Alexandria invented them a couple thousand years ago. Tobacco dispensing machines came about in the 1600s. Put a coin in the slot, the machine opens a valve and dispenses a product.

There is no mathematical or engineering or fabrication reason why your medieval-esque society could not do something similar. 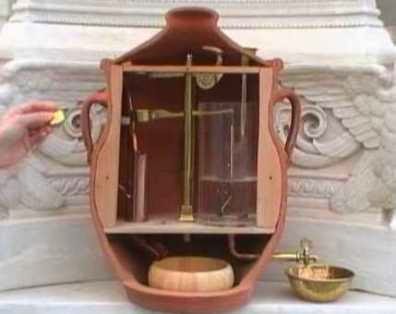 The only issue I foresee is in counterfeit detection. In medieval times, I think counterfeit detection by weight will be your only viable alternative, if magic or a money changer is not available. If they have magnets of some kind, then they could be added to weed out iron slugs at least.

If the coin is determined to be too heavy or too light (and thereby either actually fake or else clipped (a common practice in the days of precious metal money)), then it would be dumped into a return slot. A coin (or slug) of correct weight and dimensions will be accepted. Whether real or fake!

A fairly foolproof system. Faking coins is, of course, big business and back in the day carried a hefty penalty for those caught doing it. A relatively simple detector will keep all but the most advanced counterfeiters from using the machine.

A final note: unless your vending machine is dispensing title deeds to large plots of land or luxury waggons, chances are gold coins will never see the inside of one. Probably not silver either. Most likely copper or brass will be used to buy relatively inexpensive items or services.

Clearly quite intricate mechanisms are possible with sufficient understanding.

As has been pointed out by @elemtilas, large gold and silver coins are unlikely to be used for the sort of items that would be dispensed by a vending machine.

If you insist on gold and silver then the machines would have to accept very small coins (tricky even by modern standards) or ...

Employ trusted peasants to sit inside the 'machine' and do the transaction whilst hidden from view.

Tech-wise while it might be possible (and certainly on the later end of this) historically there wouldn't have been enough coin available to do such a thing.

For this to work, it's going to take intricate metal parts. So in building your world, you are going to have to take tech in a different direction. Toothed gears have been around for a very long time, and while the mechanisms for this CAN be very basic, (weights and levers instead of gears) it's not something that's going to be common unless you have more of an industrialized society.

That's why Vending machines weren't actually widespread until the 1800s. While it WAS mechanically possible, it wasn't practically viable, even though this is an old, old invention.

So why did it take so long? When the earliest mention of something like this was in in the first century A.D.? You asked how it would work, and as far as the mechanics, I think you've been answered nicely, so I am going to add how it would work on world-building and social level--as in problems you need to look at and solve though the mechanics are there.

It's like a lot of other inventions--seen as a novelty, not good enough to be practical.

You'd need a big audience and the right product. Vending machines are an automation. They are practical when you have product, an audience to sell to, but you don't have people. And in this time period, merchants wanted control over their business. This is going to be a little expensive to make, so it has to be worthwhile. In an age of artisans, when consumers wanted to touch, weigh and examine what they were getting, most products would not fit into this. If you're thinking food, consider that there are many, many laws on the books during this period about serving rotten or counterfeit food. So this was an issue of the day. The earliest vending machine had the right audience and the right product. Holy water. It's water, so no need for quality control as far as a Medieval person is concerned, and it's trusted because it's sanctioned by the church. They've got the audience because the faithful are flocking in (church tourism was a big, big thing in Medieval times, so this is the one place it WOULD absolutely work.)

Preventing Theft. Having your machine inside a church might prevent theft. Leaving something full of money unattended, especially during more desperate times (plague, famine) is quite idiotic. An attendee might be a good idea. Theft from vending isn't such a big deal in a society that isn't starving.

A Culture Shift Take a look at this answer on how Medieval shops worked. Notice that this sort of hands on selling was ingrained in Medieval culture. I've linked the answer to dispel any notion you might have that stores worked back then the way that stores work now. There is no "browsing" as we know it. There is no wandering through a store.

A widespread, consistent monetary system, in low demonination This, alas, is something that wasn't present through much of the time period you are considering. So, when you build your world, you might want to look more towards the Renaissance than Medieval times. And actually, what most people think of as Medieval is actually Renaissance. (Rome also did pretty well with that, but not great. They liked changing up coins in celebration of events). You want everyone to have coin, you want that coin to be consistent and difficult to counterfeit, so that your machine can determine the weight and size of the coin. Even in Rome and even in the early Renaissance, the sort of consistent shaped coins that a machine like this would need...those are in short supply. I can actually see people having to buy a slug from a merchant to use in the machine just to take care of this.

Novelty vs. widespread Widespread is a real shift in culture away from the Medieval times as it is historically known. Vending machines became widespread because there was a NEED FOR THEM. So you are going to have to build a reason why as you worldbuild. Not simply because you want to stick them in. But because they fulfill an actual need and solve a problem. What that need is, and what problem they solve is up to you. If they are a novelty or just in one place, that's a whole different thing, and might be an attraction for a specific business to market a product--people might want to buy from them not just because they want the product but because they want to see the mechanism work. And if it is a novelty, the elements might even be exposed so people can see them work, which will mean you will still need an attendant...

80
How to protect shops in the medieval era against thievery?

49
What does a medieval army cost?
0
How far off coast is land visible and how long to reach it in 15th century ship?
9
Resource Production Logistics for 15th Century Europe-Era Island
5
Could the 14-15th century world build a tank/AFV?
7
Giant bug noises