Could the moon crash into the earth if we colonised it and increased its mass?

Suppose we begin to colonize the moon. Assuming the building materials and biological material are all imported (not taken on-site), would it be possible for the moon to become massive enough to fall out of its orbital and come crashing into the Earth?

We should assume the materials are taken from Earth, meaning the Earth becomes lighter as the moon gets heavier.

How much mass does that represent? What scale is necessary for such an event? Would the moon need to be covered in tall buildings? Would every structure need to be built out of very dense materials?

As mentioned in comments, I don't have the full stability answer to hand (although see edit below). But I do have a practical answer.

The practical answer is that no feasible human effort could change the orbit of the moon via Earth-mass-transfer.

Here is how the net attraction between the earth and the moon would change as you moved Earth mass to the moon (Moon is approx 1.2% Earth mass), using Newtonian gravity 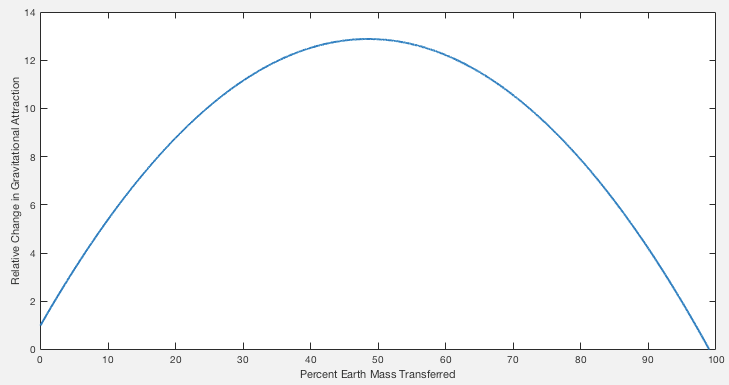 Wow! Peak 12 times increase in gravitational force?! Okay, sure. I'm still not sure that the change in barycentric rotation won't perfectly compensate for that to leave us in a stable orbit but yeah, there's a big potential change in net attraction.

Let's zoom in on the left of the chart:

See that red marker? Waaaaaay down there on the left? That represents moving the ENTIRETY OF THE OCEANS TO THE MOON. It changes the net gravitational attraction by 0.01%.

Therefore, even if mass transfer could destabilise orbits (and I am not sure that is true), the amount of mass transfer that could be achieved is incredibly insignificant to orbital dynamics.

EDIT: Having thought about the general stability of mass transfer from the moon to the Earth, I think the question isn't properly defined. To define stability we need to know both the change of mass and the change of velocity of the Earth and the Moon during the mass transfer. Keeping constant velocity sounds like the simplest option, but it is clearly unphysical: imagine we transfer mass such that the Earth and Moon are the same mass; they now have a barycentre [the point about which they rotate] exactly halfway between them --- meaning both must have equivalent tangental velocity around this centre. But we have also assumed that the Earth's and Moon's tangental velocities don't change. Therefore we have a contradiction. We can only solve this by making explicit assumptions about momentum transfer.

EDIT2: A practical consideration I forgot to mention previously. Gravity is a harsh mistress that makes moving mass very expensive. If you wanted to build extensively on the moon it would rapidly become preferable to mine materials from the asteroid belt (send a small set of mining materials up-gravity, send lots of mined mass down-gravity) rather than sending up a full set of mass from Earth to the Moon. See https://xkcd.com/681/ for a rough idea of the Gravity Well energy problem

If you tried to deorbit the moon intentionally you would have to come up with 1.18 kg km / s of change. If we used the nuclear thermal engine for its ~800 second impulse, we need 1.2 * 10^23 kilograms of fuel to intentionally cause the moon to deorbit.

Since you're trying to colonize, you're soft-landing stuff on the moon. There is no impulse provided to the moon. On the other hand, the mass came from earth so earth gets a little bit lighter, so the moon ends up a little bit further away. Considering the size of the other number, we can assume this is negligible for any reasonable purpose including terraforming the entire lunar surface.

Based on this article it seems that the increase of the mass of the moon would disrupt the earths system of time. We would become locked in an entirely different length of days and years etc. not to mention the ocean tides would be different.

And if the mass grows ina region of the moon instead of uniform, the moon might either spin a little or a lot considering the center of its mass would change. As opposed to it not spinning at all right now. But I can’t find any evidence of the moon crashing into the earth, only changing its relationship.

40
Habitable moon of a gas giant: working out the sizes and distances
8
The sun, moon, stars and planets of a flat world in the center of the universe
5
Could over-colonization throw our moon out of orbit?
23
Could Earth and the Moon be the same size?
28
How can spacecraft manufactured on the moon be powered?
12
Gravity on an Orbital Ring
5
Habitable low mass super earth and its habitable high mass moon feasability
6
Earth-killer challenge
1
What orbital structures could be raised around a gas giant's moon?
3
How to place multiple small moons and one large moon in stable orbit around an earthlike planet?