How long would a flat Earth last?

As we all know the Earth is flat. Once upon a time a group of explorers set off with the idea of proving that the world was round and that there was a route to the spice islands the other way, but the few survivors came back screaming about seeing ships falling off the edge of the world and something about dragons.

The world's water levels seem to run down slowly but every 12 hours or so they're topped back up again. Nobody knows how this works or where the water comes from, apparently arrangements are made. What this means is that that there's an apparent infinite supply of water and the edge of the world consists of a constant waterfall.

How long would such a planet continue to exist if subjected to normal erosion from said rimfall?

The main problem is that there is bound to be at least one section of the rim that gets eroded slightly faster than its surroundings. This explains the horseshoe shape of Niagara falls. 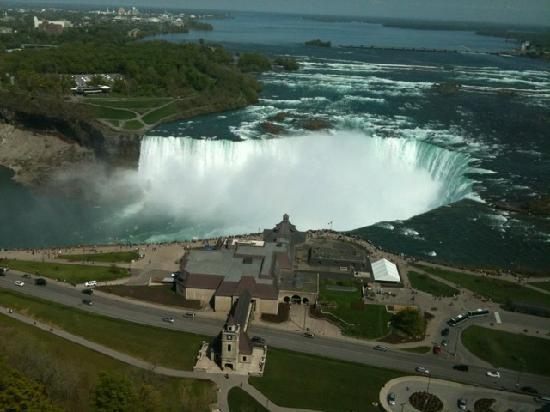 However if this erosion happens to the rim it will be like breaching a dam. There will be a catastrophic failure at some point and the ocean will drain at that one point. The effect will spread sideways and towards the centre of the planet until the ocean is emptying faster than the mysterious supply of new water can keep up with.

It is difficult to predict when a catastrophic failure will occur but I imagine it would take only hundreds of years. Maybe a few thousand.

Assuming the rim is of a uniform rock type and starts off just a few meters under sea level (so near 50km thick), it will quickly wear flat. The erosion rate will depend on the force of the water going over the rock, and you have essentially described the pressure of whole oceans bearing down on this rim.

Assuming the water is topped up daily to the same amount, the amount of water going over the edge gets more and more as the rim erodes, exponentially increasing the erosion.

How long the rim lasts depends on it's width, as it will erode quickest at the very edge where the water speeds up, but once it has gone you are going to be left with a river world. This will cause more problems, as all that water is now eroding much smaller areas of crust and will erode through completely very quickly leaving essentially hundreds of bottomless chasms.

Once enough of these bottomless chasms form, you are back to the erosion rates that are more in line with known waterfalls, so the chasms will widen at approximately a km per millennium each (this would vary wildly depending on rock type).

Not the answer you're looking for? Browse other questions tagged reality-check planets alternate-worlds erosion or ask your own question.

54
Infinite flat world
2
Flat world and water
1
How long would current weapons last?
41
How long would human immunity last in space?
77
How Long Could an “Eternal” Fire Last?
3
How flat is “Flat Space”?
10
How long would this eclipse last?
9
If we dug a really big hole on Mars, how long would it last?
9
How long can a wooden door last?