Can someone help me with ocean currents? I'm really confused

I've been working on a constructed world which started out as the home of an alien race from a sci-fi story I'm writing but just became a pure world building project.

As you can see from the map it has one major continent, one minor continent, and several islands. The poles are nothing but water and ice caps.

I was using artifexian's video as a guide to mapping out ocean currents but eventually, I got confused. Here you can see how far I got before giving up as well as a blank map. Thanks for the help. 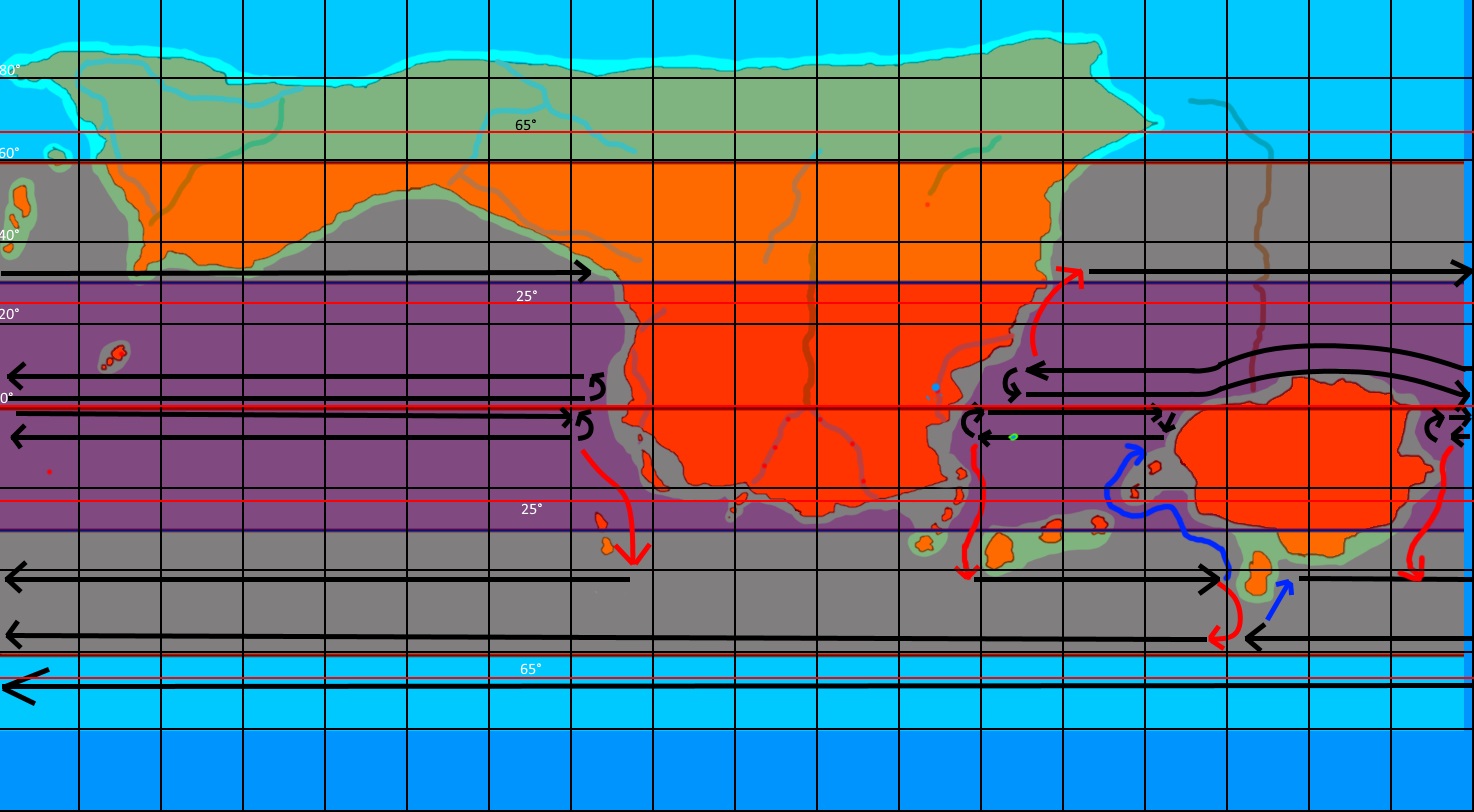 Could someone explain what would be a realistic pattern of surface ocean currents and upwelling for this continental configuration? Thanks! 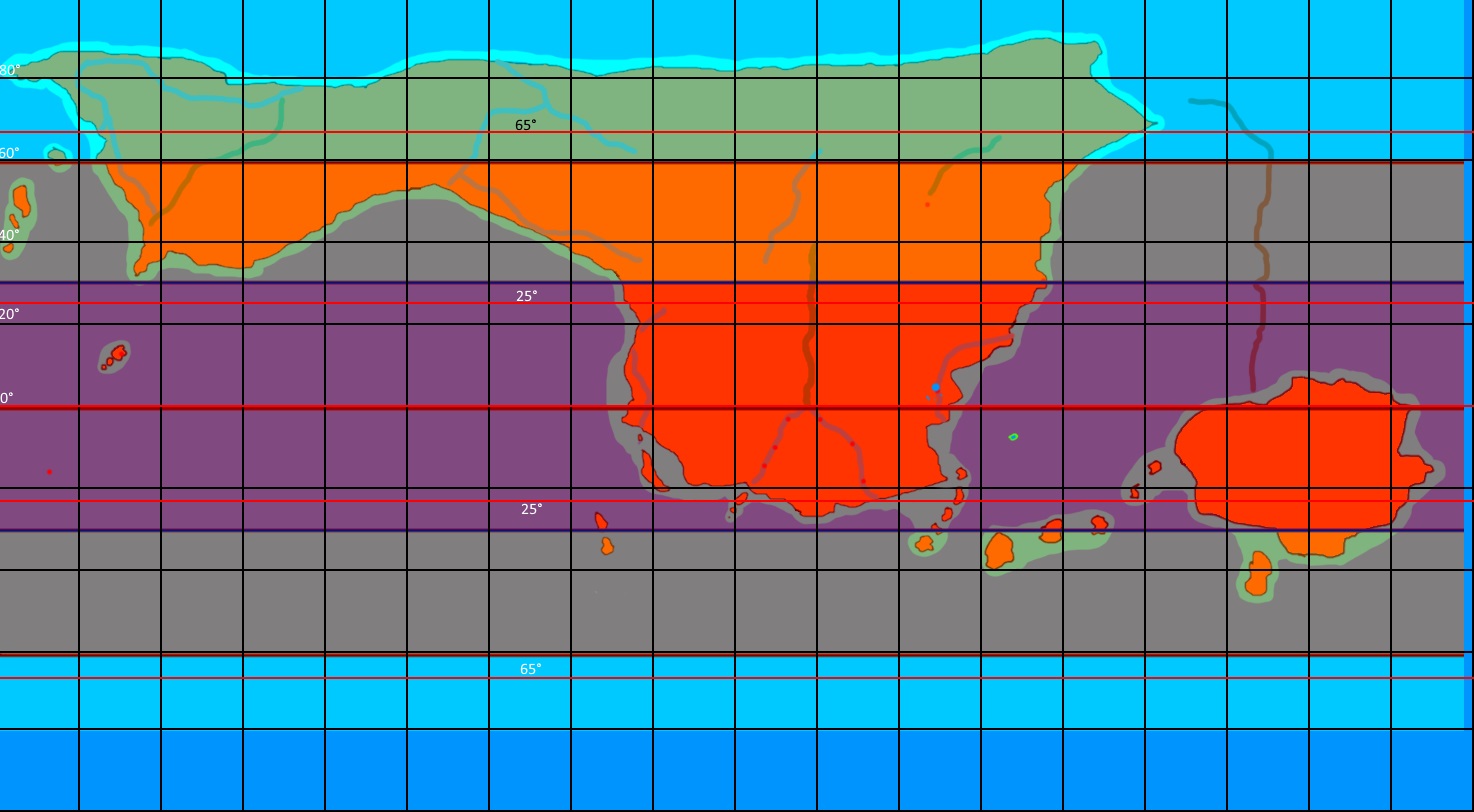 Currents are complicated - start from the basics

It looks like you've already got the basics down. Assuming your world has similar prevailing wind currents (i.e. three circulation cells in each atmosphere, spins the same direction, and has a similar temperature gradient), you're wise to start with the equatorial currents. These transport large amounts of water along the equator. In the middle of the deep and powerful equatorial current, there's the shallower and weaker equatorial countercurrent that flows backwards along the equator. So far, so good - although it looks like the turnaround for the south equatorial countercurrent has the arrow on the wrong end.

When this equatorial current collides with landmasses, it splits and travels to the north and the south - you've also got this covered pretty well. However, because the warm water is moving toward the west, the boundary currents running along the east coast of continents will be warm, while the boundary currents running along the west coast of continents will be cool. Check out the map of Earth below to get a sense of this: 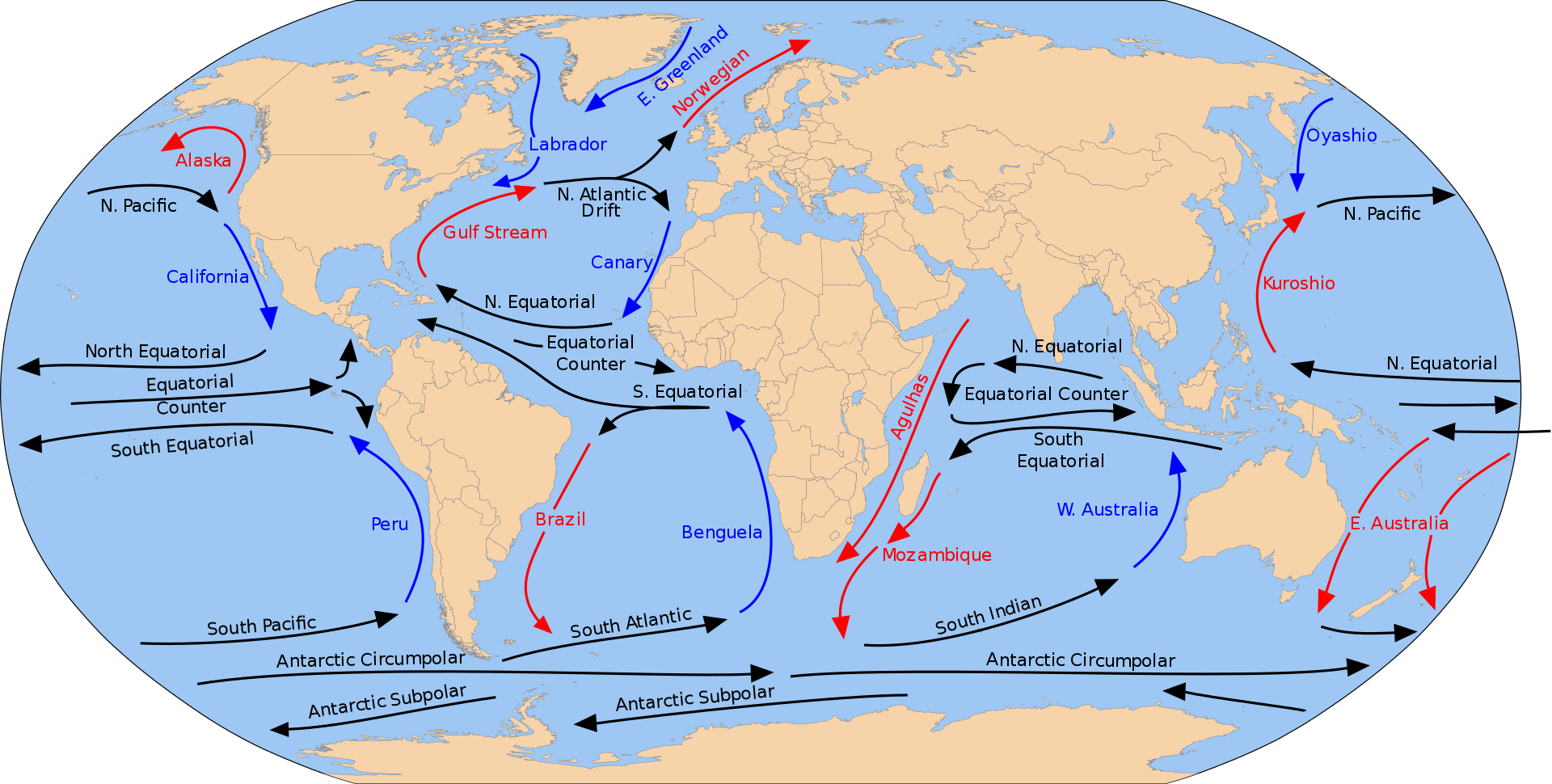 Note that the blue currents (the cold ones) are generally off the west coasts of continents (which is, confusingly, the east side of the ocean) and the red currents (the warm ones) are off the east coasts of the continents. Also note that red currents always point away from the equator, and blue currents always point towards it. This also answers your question about upwelling - upwelling happens largely in cold-water currents on the west coast of continents (think Peru and West Australia).

This looks like the step where you got confused - your red arrow traveling down the southwest corner of the main continent should be blue, and pointed in the other direction (towards the equator). Remember that the main water flow at the equator is to the west, so we'd be drawing water up from the south pole to keep it going.

Now that we've got three sides to our gyres, go ahead and fill in the fourth one by connecting the head of the red current to the tail of the blue one. Now we can see another point that may have been causing some confusion - the south circumpolar current is going the wrong way! It's not impossible that this would occur, but you'd have some crazy waves and some very stormy seas where they collide, and you'd need another massive energy source (giant, angry penguin?) to explain why it's going the opposite direction.

It looks like we can expect four major gyres on your planet. Downwelling will happen in the center of these gyres, as Ekman transport moves water slowly toward the center, and water will upwell on the west coasts of the continents as detailed above.

Spend some (read: a lot of, because they're beautiful) time looking at currents on Earth and how they react when running into landmasses. There's a fantastic interactive map at earth.nullschool.com which you can explore, and NASA's Ocean Eddies provides some high-resolution detail for more specific things.

I'd also recommend rotating your map projection - while it'll probably be useful for the rest of your story to have a continent-centric map, designing ocean currents will be easier if you center it on your ocean. Consider something like the Heezen-Tharp map, by brilliant oceanographer Marie Tharp: 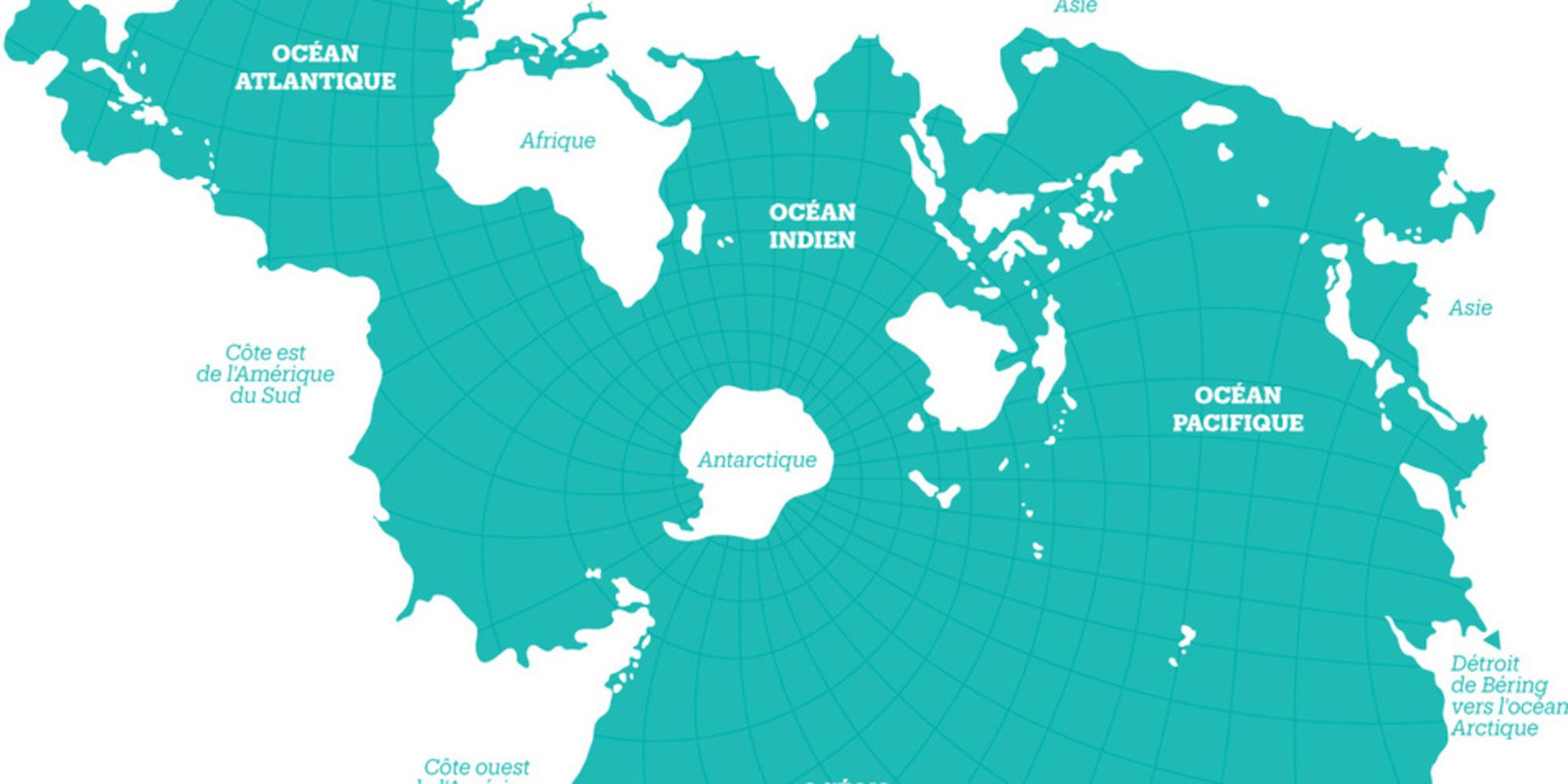 Actually, I went ahead and mocked up what it would look like for you because it helped me figure out the rest of the question above: 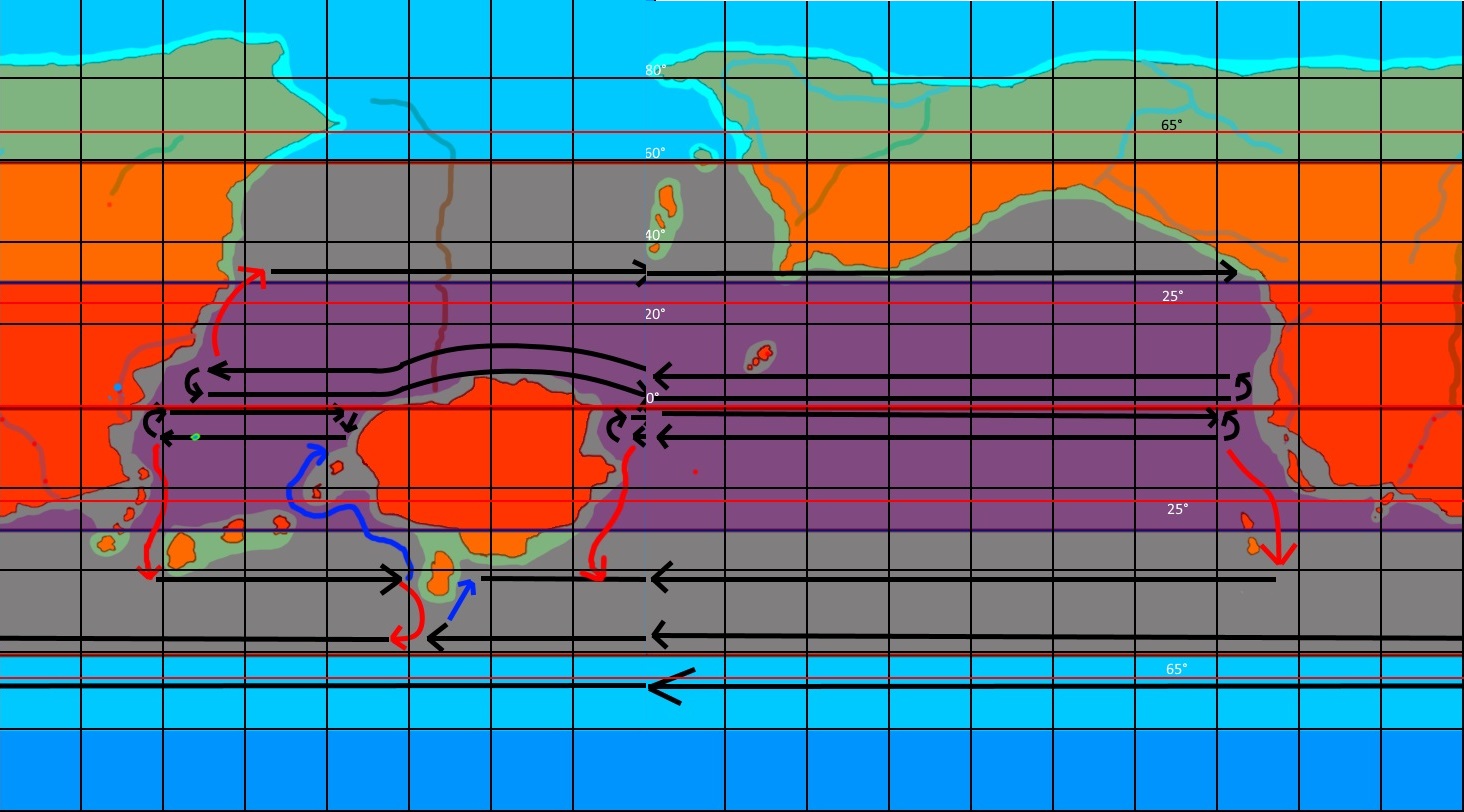 Not the answer you're looking for? Browse other questions tagged planets science-fiction earth-like ocean or ask your own question.

57
Creating a realistic world map - Currents, Precipitation and Climate
4
Are these ocean currents realistic for a planet that rotates 16 times slower than Earth?