How could a dust cloud form around a middle-aged star?

I bring you all to the planet Krikkit, stuck in a star system enshrouded by a large dust cloud which prevents the Krikkiters from seeing the rest of the galaxy - and, by extension, the universe. The planet is a solitary, Earth-like one, orbiting a solitary, Sun-like star.

But the dust cloud wasn't always there. As per Hitchhiker's canon, the dust cloud is the remnants of a large computer, which was subsequently pulverized. It's safe to say that the system was about middle-aged at the time.

That's the work of Douglas Adams. Now my work begins.

Many stars have protoplanetary nebulae - clouds of gas and dust that are the remnants of the giant molecular clouds in which the stars formed. They soon dissipate, although the protoplanetary disk remains. I'm looking for a way to form this sort of gas clouds around a main sequence star, ideally one like the Sun in the present day.

How could a star gain a dust envelope partway through its life?

Some things to be aware of: 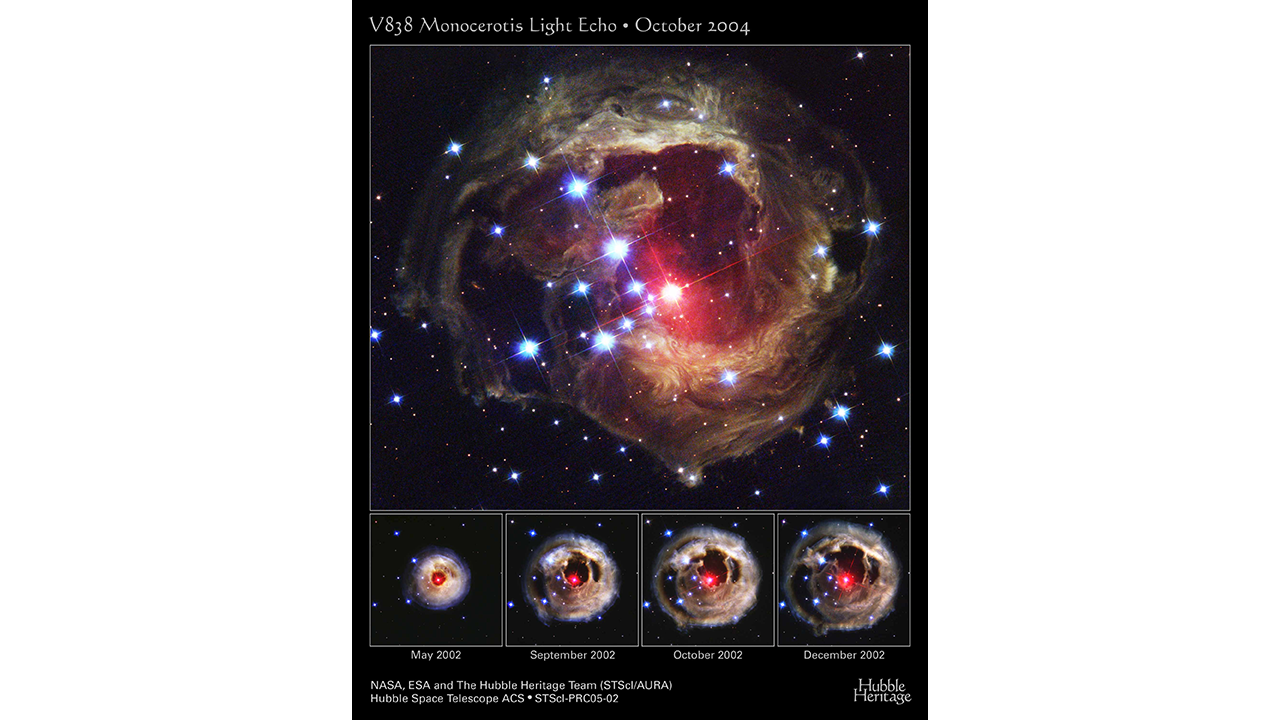 Depicted: V838 Monocerotis. This star emitted a bright flash while Hubble was watching. The flash allowed Hubble to see the cloud of dust surrounding it. How would such a cloud form? I will propose a mechanism that is my answer to this question.

Backing off a step: how could a star eject material that might form a dust cloud? Some stars like Wolf-Rayet stars do this fairly often. One mechanism would be an acceleration in the speed of spin. Just as speeding up the spin of a merry-go-round with a motorcycle (check youtube if curious) will cause riders to be flung off of it, so speeding the rotation of a star will cause it to fling mass off of it.

The lost mass could expand to form a cloud or ring surrounding the star.

How to increase rate of spin? One way would be to decrease the size of the star. As a skaters spin will increase when she pulls in her arms and legs, so a star's rate of spin will increase if it decreases in size. The aforementioned Wolf-Rayet stars have shrunk down as compared to their prior size, and maybe consequent acceleration of spin accounts for their dust generation?

I think these Wolf-Rayet stars are older than middle age and so not what is requested in the OP.

Another way to increase rotational speed is to acquire it from another object. If I go running at a merry-go round and jump on to the edge, it starts turning - it acquires rotational momentum from me. Some people think that V838 Monocerotis was originally a binary star and the observed flash was the collision of the partners.

Tylenda disagrees: "I think that almost all of the red novae are mergers." In particular, he argues that the best-known red nova, V838 Monocerotis, resulted from such a merger. That explosion was more powerful than V1309 Scorpii, indicating a greater mass.

For contact or semi-detached binaries, the transfer of mass from a star to its companion can also result in a significant transfer of angular momentum. The accreting companion can spin up to the point where it reaches its critical rotation rate and begins losing mass along the equator. https://en.wikipedia.org/wiki/Stellar_rotation

If prior to the collision one of the partners had its rotation accelerated by the other, that could account for ejection of the dust clouds which the later collision illuminated.

How then to make an increase in acceleration for the middle aged star described in the OP?

1: Star is actually a binary, and one partner is gradually being accelerated by the other. When acceleration of partner exceeds critical rotation rate, it loses mass to form the dust cloud.

2: Star is obliquely impacted by an outsider arriving from interstellar space - rogue white dwarf or what have you. The mass transfer from the object is not much, but much of the kinetic energy transfer turns into faster rotation of the star, pushing it past critical rotation rate and causing mass loss into the dust cloud.

3: Star's mass is increased by an outside impactor, with consequent decrease in diameter and increase in spin rate.

After my google session I am aware that there are many schools of thought about V838 Monocerotis and the provenance of its cloud, and Wolf-Rayet stars, etc. I do not mean the above to represent dogma on these entities. I did want to invoke real things to illustrate the idea that faster spin of a star could cause it to emit a dust cloud.

They are usually born in stellar nurseries and then move out.

I guess there is nothing stopping a star moving into a region of gas and dust.

It could be a dark nebula or an H II region

There are classes of stars like Eta Karinae that are unstable and suffer oscillations. Those stars usually pass periods of large loss of matter. The nebula around Eta Karinae is not resulting from a supernova but simple ejecta due to this star fluctuations. This sort of star is called a variable star (in that specific case a luminous blue variable star):

Luminous blue variables (LBVs) are massive evolved stars that show unpredictable and sometimes dramatic variations in both their spectra and their brightness. They are also known as S Doradus variables after S Doradus, one of the brightest stars of the Large Magellanic Cloud. They are extraordinarily rare with just 20 objects listed in the General Catalogue of Variable Stars as SDor,1 and a number of these are no longer considered to be LBVs. Wikipedia

If you have a solar-like style star near enough to such a beast, you might have the cloud you are lookin for.

There are serious implications to this question.

In other words, what you have here is a Dyson Sphere. A particularly large and inefficient one. Not having done any maths, I would think that to be able to absorb a large proportion of the output energy of a star, you need something on the order of magnitude of the mass of the star itself.

Basically I think you need a huge cataclysm, natural or unnatural. For example, you could have a binary system with one star ripped apart by a passing black hole.

I can think of two basic mechanisms for blanketing the inner system with a dust cloud that was not previously present:

One has already been pointed out; the system could pass into a much larger dust cloud, such as a large nebula. This would blanket the whole system with dust and gas.

The other is a secondary bombardment caused by a major gravitational perturbation of the outer system, this will probably result in some impacts for the planet but mostly it will increase comet traffic in the inner system to the point where material from their comas will obscure the sun. This would probably mean largely depleting the Oort Cloud and Kuiper Belt in the space of a century or so and leaving most of that material float around the inner system absorbing sunlight. The cloud would extend from about 3 AU inwards thickening as it approaches the sun. What could cause such a massive disruption? The near transit of any really large mass like a blackhole, a super giant star, or possibly a neutron star.

Some notes that may or may not be useful; soot, as in finely divided black carbon, would be the optimal "dust" to use, for intercepting sunlight and heat. You wouldn't need very much material if you just want to block most of the light reaching a planet, just a thin band a second or two of arc across along the elliptic would do it, the closer to the primary the band is the smaller it can be, I think. From the surface it would be impossible to tell the difference between the effects of a debris cloud in space and the sudden pollution of the upper atmosphere by vapourised material from a number of comets or meteors skimming through the atmosphere.

Not the answer you're looking for? Browse other questions tagged astronomy stars or ask your own question.

8
How could a civilization trigger star formation?
13
How can a Type II civilization influence accretion rates from a debris disk to a passing star?
8
What stellar number density would two galaxies have to have for another star to collide with the Sun during a galactic merger?
18
How can I safely brighten my secondary star?
2
The view in a binary star system
17
Could the Sun be born again?
7
How far should second star be in my binary system?
5
How bright is the night with 18-22 AU distant star?
7
How would I make a natural, long-lived red giant star?
3
Could a planet form from the remnants of a star and its solar system?