Rock crushing hands, how to make it possible?

A species of humanoid creatures with a strange skull structure and huge horns has somehow immense strength in their hands. The rest of their body seems to be strong in proportion to their weight and height, just like normal people, but their hands are strong enough to crush rocks. Yet their hands are not giant or disproportionately big when compared to their body.

What needs to change in the structure of the human hand and forearm in order to allow it to crush sedimentary rocks such as flint, chert, breccia, mudstone, conglomerate etc.?

Nature can already do it!

Replace the humanoid's thumb and forefinger with crab claws. 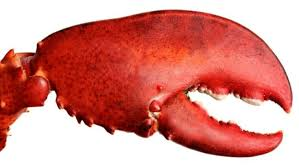 Video of a coconut crab splitting a rock 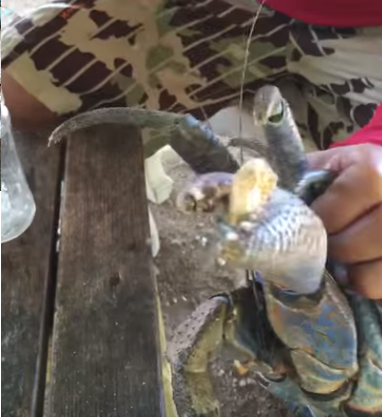 Consider simphysis (cartilaginous 'rejointing') and tougher nails/claws, indeed if this nails continue to grow over the lifetime of individuals, the simple requirement for 'exercise' to keep them from growing overlong would increase hand and forearm strength in adults.

As with teeth, the surface area force is applied to is relevant, rather than (or in addition to) a greater application of total force, applying the force more acutely (claw points) to a surface will allow superior crushing action.

(Crushing is essentially any apparently compressive force that causes granular decomposition of the structure) It doesn't actually need to be compression doing the work, forcing a nail into most objects will cause some splintering/shearing/fracturing along similar lines to hitting it bluntly with a sledge hammer.

They have club-shaped appandages like mantis shrimps and it's not their strength that crushes these rocks, but their speed. The appandages can even be disguised as or integrated into a humanoid hand or arm. 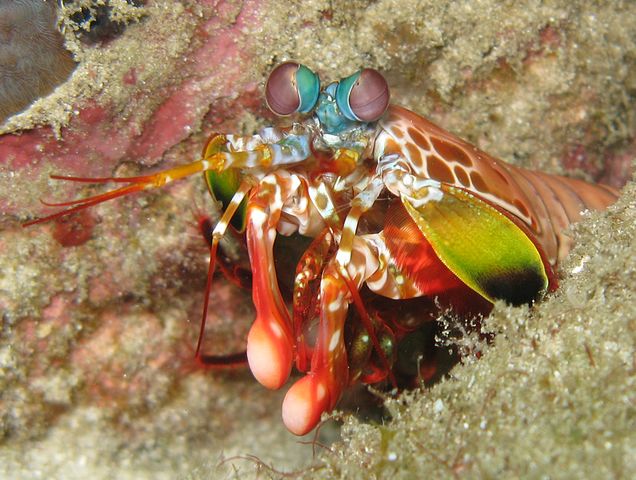 Because they strike so rapidly, they generate vapor-filled bubbles in the water between the appendage and the striking surface—known as cavitation bubbles.[10] The collapse of these cavitation bubbles produces measurable forces on their prey in addition to the instantaneous forces of 1,500 newtons that are caused by the impact of the appendage against the striking surface, which means that the prey is hit twice by a single strike; first by the claw and then by the collapsing cavitation bubbles that immediately follow.[11] Even if the initial strike misses the prey, the resulting shock wave can be enough to stun or kill. (picture and text from Wikipedia)

Granted, the effect won't be as strong as under water, but these humanoids could compensate by expelling a dense gas right before striking the rock to increase the difference in pressure between the strike and the retreat of the appendage.

They could have specialized sweat glands, that excrete a fluid clad by some very elastic membranes, essentially producing root-like structures, but vastly sped up. Roots split rock by using hydraulic pressure from within preexisting fractures, and the hands would do the same. The hoots (hand-roots) could then either be discarded or resorbed. If there was some sensory feedback from the apical parts of the hoots, it might be possible to prioritise invading cracks that have promising characteristics for splitting.

so imagine a plate like armour around the fingers and hands, like scales, which are composed of a substance harder than the stones you are trying to crush but not too brittle (diamond?). then its simply a matter of increasing the strength of the muscles to the point in which the stone crumbles under their force and a skeletal structure that resists the forces better than the stones. eventually there would be a limit and like SZCZERZO KŁY points out it is important what stone your crushing as he would have more trouble crushing diamonds than sandstone.

without increasing the size of the hands your left with changing their material and density. so your looking at applying the latest advancement's in material science to their bodies (carbon fiber bones?).

edit: a quick experiment you can carry out is to get a couple of coins between finger and thumb and try to crush something in between them, I bet you will be surprised by what you can crush.

2
Would humanoids from high gravity planets be smaller than us?
5
Creating a humanoid squid
6
How could a wolf-man be explained without magic?
33
How to defend when attacked by an avian species?
7
Effects of a ferret-like spine/ribcage on bipedal posture, possible leg lengths/proportions?
3
Most effective shaped horn (horns)/ crest for a head butting human?