Let’s say a 1 ton (US) sphere of tungsten moving at 99.99% the speed of light hits earth, what happens? As specific as possible

What kind of destruction would it cause? I’m assuming it’d be rather significant, could it shatter a tectonic plate? The crust? How would the oceans fare? Would the planet be able to catch the projectile? Could any life survive the event?

And if you’re able to stand another question, how immediately noticeable would this event be to other planets in the star system?

This turned out unexpectedly fun... and for once the answer to a question involving 99.99% of the speed of light isn't "everybody dies"

Where is this sphere being fired from?

If it's from outside the solar system then hitting the earth as a sphere is.... a problem...

As the sphere approaches from the orbit of Pluto we can estimate how much matter it would hit.

We can treat the space it passes through as a cylinder with radius 0.23 m and height of 7.5 billion kilometers.

It would take our projectile about 7 hours to travel that distance.

It would pass through 1246 km^3 (cubic kilometers) of space.

In the solar system with the solar wind the density of atoms is 2x10^7 per cubic meter, mostly hydrogen or helium.

Treating it all as hydrogen for simplicity that gives us 0.04171 mg of hydrogen.

This gives us 261.3 GJ (gigajoules) or 72.59 MW h (megawatt hours) as the approximate energy involved in the collisions between the fine mist of gas in the solar system and the bullet.

That's the energy of the atoms hitting the front of the bullet, and most of the energy would be effectively dumped into the metal.

Given this is over 7 hours that means there's something like 10.37 MW of energy being pumped into the sphere every hour.

Unfortunately your tungsten "bullet" sphere is getting hit with 37,332,000 kJ of energy per hour so within the first 7 minutes of its 7 hour journey it's become a cloud of atoms glowing hot at about 5555 degrees Celsius...

At this point the calculations get harder because it's no longer a nice neat sphere; it's a cloud of super-high temperature gas traveling so fast that it's glowing like the heart of a star and it's very hot gas so the cloud is expanding very fast. It's now hitting even more of the random atoms in space as it's approaching earth. Assuming the sphere was aimed to hit earth perfectly dead center I can't even tell you if all of the gas would actually hit the earth or if the hot cloud of gas would expand from itself fast enough to mostly miss the earth. I don't know how much extra energy the cloud would lose to hitting atoms along the way after the sphere melts and turns into gas since it now has a massive surface area...

But let's say that the cloud all still hits the earth's atmosphere, but over the 6 hours and 50 minutes since it passed Pluto it's spread out to hit the entire facing side of the earth fairly evenly and none misses and it's still carrying most of its energy.

As in L. Dutche's answer, according to Wolfram Alpha, the relativistic kinetic energy of such a bullet would be 6.265 x 10^21 J, or 1.5 million megatons.

The bullet is carrying far less energy than a single days worth of sunlight.

Cosmic rays can't pierce the earths atmosphere and the bullet is now more similar to a giant cloud of cosmic rays, but each with far less energy than the "Oh My God particle".

Everything in orbit on that side of the earth would be hit with a huge dose of cosmic rays.

The hard radiation would be caught by the atmosphere and some heat would make it to the surface... but the atmosphere is vast and that much isn't even enough to raise the temperature of the gas on that side of the planet by 1 degree Celsius average.

I suspect anyone outside might get flash burns. I don't know if the energy would be enough to start major fires. To an extent the more energy ends up as high energy particles and radiation the less hits the earth surface as heat.

But to answer your question: As it approached the gas cloud that used to be the bullet would burn brightly in the sky as it impacted gas and dust ... then for a brief moment the entire sky of half the earth would blaze with light thousands of times brighter than sun... it might burn things on the surface.... it might shower a significant amount of secondary radiation... but the tectonic plates would be safe.

Edit: re Yakk's comments below, as the cloud is passing through space there may also be bursts of something like space-lightning as the cloud interacts with subatomic particles that strip away electrons and depending on how far away from earth the bullet starts ..

So the cloud may partly miss earth since the diameter of earth is only 12,742 km, so it may be a little bit like getting caught in the middle of a 'shotgun blast' of space-lightning-filled hard radiation with much passing either side of the earth.

The gravitational binding energy of Earth is $2 \cdot 10^{32} \ \mathrm J$, therefore we can stay assured that the planet won't be completely wiped out.

Quoting from this useful page, the impact energy would be comparable to the last eruption of Yellowstone super volcano. This event left a large deposit of tuffs, known as Lava Creek Tuffs. The following picture shows their extension: 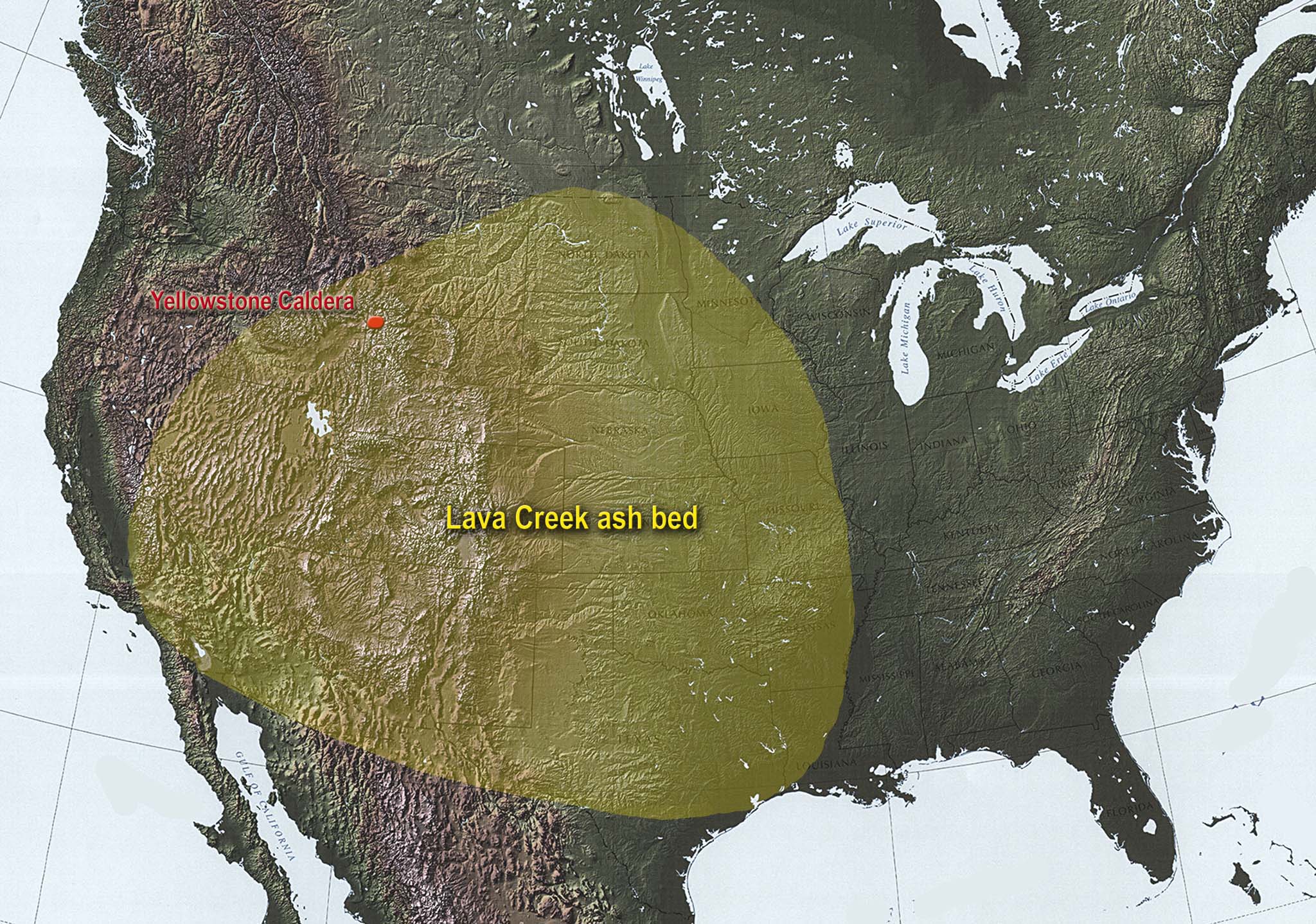 The Lava Creek Tuff is distributed in a radial pattern around the caldera and is formed of 1,000 km3 (240 cu mi) of ignimbrites.

Lava Creek Tuff ranges in color from light gray to pale red in some locales. Rock texture of the tuff ranges from fine-grained to aphanitic and is densely welded. The maximum thickness of the tuff layer is approximately 180–200 m.

The relativistic impact would be for sure a global cataclysm: the spallation would probably temporarily deform the planet, and the following relaxation would result in increased volcanic activity.

The resulting emission of ashes and gases would severely impact life, with mass extinction effect.

An observer in a suitable position in the Solar system would notice a bright flash during the impact, probably followed by an increased IR emission due to the thermal effects of volcanic eruptions.

To give you a reference of how bright would the flash, the impact energy is about 1/10 of the total solar energy striking the Earth in one day, and it is released in a much shorter time. I assume that for few seconds the Sun and Earth would appear like twin stars in the sky. 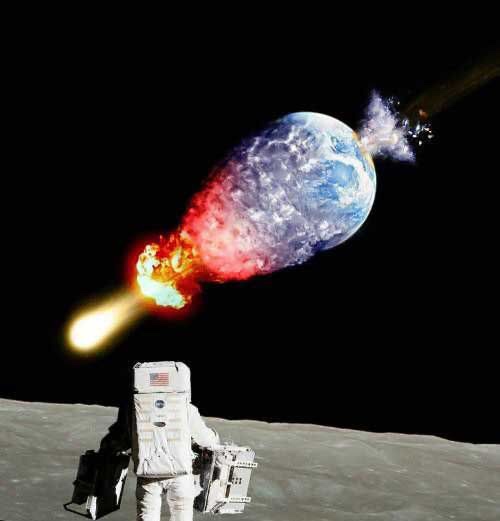 I think that with the size and speed it would be quite powerful. First of all the impact would be virtually instantaneous. This would cause all the force to be extremely concentrated. If it's moving 99% the speed of light, well, imagine all that power compressed into a second--now imagine it being a million times faster than that. Now imagine it being WAY faster than that. The damage of the impact is going to be based on the force multiplied by the inverse of time--and as time approaches zero...

Not the answer you're looking for? Browse other questions tagged science-fiction physics explosions or ask your own question.

47
What if the speed of light were 100 times higher?
8
Planetary Habitability at twelve to seven billion years ago
7
Planet with infinite overlapping surface on an axis, problems of the concept
12
Redesigning the human body to flourish on a high-gravity world?
13
What would happen if 10^37 J of energy was dumped into the sun via antimatter detonation?
48
How would you know your floating island was losing altitude?
6
Would there theoretically be an accompanying effect to something moving beyond the speed of light?
6
Is there a safe but weird distance from black hole merger?