Inhabiting my earth-like world will be humanoid beings that have a skin tone that is as dark as Vantablack. Let's assume these human-like beings share the same ancestry as humans and we can safely assume cognition and physique to be identical to humans. The only difference being their skin is naturally as dark as Vantablack (well techinically, this may require some inner workings, like bio-mechanics, to be different as well). While Vantablack is not actually a color but rather a material, it's still the closest thing known to man to the effect I want to create in my world, and so as not to use the word inappropriately, I will just coin my own word for these fantasy humans: Vantaman. While the darkest known pigment of us humans has not been scientifically documented, I did want to provide a frame of reference. From a crude1 series of image analyses I got the hex color: 1f1b1a for very dark-skinned homo sapiens. Hex colors, however, can't do Vantablack justice. Vantablack is often described as the closest thing to looking into a blackhole as we can get. It absorbs 99.97% of light. Here is a Vantablack material demonstration, both busts are identical in shape: 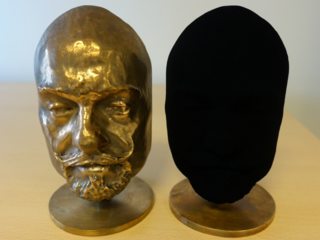 To help us tackle the task of how Vantaman came to be, it may be helpful to understand how actual humans took on the adaptation of dark skin in the first place. According to the understanding of human evolution at the time of this post, humans began to develop dark skin pigments through natural selection about 1 million years ago. The context for this adaptation was these hominids were beginning to move into environments that offered little to no protection from exposure to the sun -- the Savannah. It was at this point that the hominids began to have less and less body hair and began to develop perspiration as a means of cooling down. And it was at this time that humans began to take on the trait of having dark skin. The darker skin helped protect the bio-mechanics needed for healthy hominids. With only vestigial body hair, the hominids with lighter skin could not provide sufficient protection for embryogensis and so the melanin-dense darker skin was naturally selected to deal with harmful UV radiation. (it's thought that they would conceivably face DNA degradation as well). Of course as later descendants left this environment and ventured to, say, Europe, where humans embraced a more troglodytic lifestyle, then skin pigments became lighter to allow our livers to synthesize vitamin D more easily. And the rest is history.

With all that in mind, it's all the more challenging to conceive of an evolutionary narrative to explain a vantablack skin pigment trait. Why would Vantaman need to absorb 99.97% of light?

My first inclination was to keep the narrative and up the ante; Vantablack pigment to cope with a sun that emits far more radiation than our sun. I lacked the knowledge of astrophysics to gauge whether such a world would still be earth-like my hunch was no. However maybe someone more knowledgeable can come up with some special case scenarios and revive this solution.

However the question is not only concerned with stellar emissivity -- anything rooted in science is fair game. To help maintain a reasonable scope, here is a quality metric:

Quality Metric: The closer to earth-like your evolutionary narrative for Vantaman is the better2. If it turns out there is no earth-like solution in the truest sense of the word, then I can still accept an answer as long as it's scientifically plausible. Earth-like is ideal though; I don't want to go nuts with mother nature unless it's really, really necessary.

1. crude because images not robust to different lighting or other external factors, but I did my best and averaged the hex value

2. I think this is a reasonable quality metric; we can quickly tell what's plausible on Earth, but we are on the honor system to an extent. For example, who is to say what's more outlandish: UFO's beaming lasers at Vantaman to be dark or having billions of tiny blackholes continuously forming and decaying to create Vantaman's skin. If it comes down to this, we'll just have to use another metric: what is there documented evidence of?

Vantamen developed their dark skin tone in an arctic tundra, where you need to get the most out of your energy sources. As you said, the pigment to produce vantablack requires negligible resources, so the extra gain in solar radiation absorption makes up for the energy to produce the pigment.

So, much like the mighty polar bear, your Vantamen evolved the darkest skin they could to gather the most heat they can from the sun: 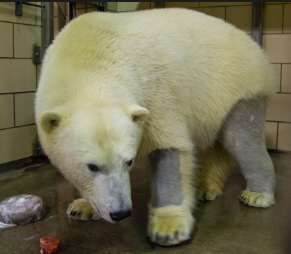 Vantamen live on a vantaplain surrounded by vantagrass. Dark, nutritious volcanic soil sprouts grasses coated in carbon nanoforests evolved to suck up as much light as possible using [insert plausibly quantum term here]. The vanta colouration is simple defensive camouflage against predators that are exceptionally good at picking out non-vanta prey. They might even use the vantagrass somehow to gain or maintain their vanta colouration.

This entire area of the planet is incredibly hard to navigate as pretty much everything looks exactly the same shade of uniform black, hence why the vantamen exploit this particular niche.

Their art is incredibly dull.

The only reason to have that kind of absorption is stealth.

From the perspective of absorbing something of value, the difference between 99% and 100% is rather negligible. If you are that strained for resources, you're probably already doomed.

From the perspective of not letting something in (such as UV rays), there's little advantage for pushing for such high absorption when reflection and scattering are more than efficient. It's much easier to layer up the biological equivalent of zinc paste, or even mud (as many animals do) than to try to come up with such a perfectly absorptive layer.

Vantablack doesn't emit anything, so the only thing that's left would be the cases where you specifically desire to not provide any emissions. It's a sort of "stealth mode" If you are capable of "looming," which is moving towards a prey without changing aspect angle, you appear to grow in size and it's hard to judge distance (dragonflies abuse this). THis would be even more effective if there was no useful information found in your image.

Of course, this would also generate a mighty sharp silhouette, so it would be bad during the day.

So I say you're looking for a predatory species that hunts at night. The dominant prey animal on the planet has developed an astonishing telescope-grade nightsight capability, which lets it see preadators coming a mile away as they graze. Vantablack may be just what the predator needs to be truly invisible when striking the prey.

You're probably looking for a really black owl.

Vantamen evolved in a completely dark environment, much like the ocean floor. Predators hunt by using bioluminescence to illuminate and locate prey. By being completely dark, vantamen stay camouflaged against the dark background even if you shine a light on them.

Sure, they will cast a shadow, but they will still be harder to spot than a creature of any other color.

Being practically invisible to them is no problem because they find each other and communicate through non-visual means.

Even though we have not seen Vantablack in biology, we are assuming its possible

Actually, Vantablack is biologically possible, quite easily in fact: https://www.nature.com/articles/s41467-017-02088-w

Which I bring up because you could use all of the evolutionary mechanisms that have been proposed for hyper-black birds. Sexual selection being the lead choice.

For sure there is a problem to make your equipment close to your skin for daytime. Not a big problem in low-light situations.

This could be useful for a creature that operates in groups, either for hunting prey or avoiding predators. When a group of Vantamen are close to each other, they just look like a uniform black mass - it is nearly impossible to tell how close or far apart they are from you, how many there are in the group, or the location of any one individual target. This can make them hard for an enemy to attack.

Not the answer you're looking for? Browse other questions tagged science-based evolution earth-like humanoid prehistoric-times or ask your own question.

9
Evolution bottleneck event leading to color changing humans
42
Why does my species tock like it ticks?
1
How could you explain black firebreath?
14
Aliens to play a mischievous space-time practical joke on Earth
7
What kind of “space force” would be needed to protect space assets in the near future?
7
What mechanisms need to be in place for an advanced, peaceful society to retain high testosterone levels?
3
“Realistic” Dwarfs Part One: Bioluminescence for active Vision
12
What kind of world would drive brains to evolve high-throughput sensory?
3
How big could dinosaurs get with super strength and durability?