Harnessing energy from the moon like from the sun

So we harness energy from the sun using beams, right? Well what if we were to harness energy coming off the moon the same way? For those long winter months when the sun is rare we could use this to heat our homes, (if the energy is right), but first we would have to make some sort of "Lunar Panels" to harness it. But is this possible? Does the moon give off the correct type of energys for this? If not, is there a different way to harness moons energy? (Besides Tidal Power).

Yes, except no. Technically we could get power from the moon via solar (lunar?) panels, but moonlight is far, far weaker. According to what I've been able to find, it's between a millionth and a three-hundred-thousandth of solar power available for the same area. Hamsters on wheels would probably provide more effective power.

Now if you use the moonlight to power werewolves on hamster wheels...

Actually there is a workaround - but only if your world is advanced enough that local space flight is possible on a regular basis:

Install solar panels - on the moon!

Since the moon suffers from no cloudy days or wintry months, technically you could use solar energy gathered from its surface and then stored in batteries. The batteries would have to be shipped to and from Earth and that could be the foundation for a typical 'super corporation.'

If all else fails, Darth Wedgius' Werewolf Hamster Wheels are worth a shot - if you're that desperate!

Well we can theorically fill the moon surface with mirrors (well the ~50% of visible moon at least), directed toward Earth and with a slightly parabolic surface in order that each single mirror can focus the light on a particular point of the Earth. If every mirror can alter its orientation according to moon phase then we will have a varying amount of energy to be used on a single point (that can in example use a steam tank to convert the Moon-laser into kinetic energy)..

Looks actually more like a weapon than anything really usefull, and as side effect moon will no longer be visible clearly because now instead of reflecting light in each direction is reflecting light only in a specific point of the Earth surface.

The working principle is like current solar plants, but instead of using a central tower, we use Earth: 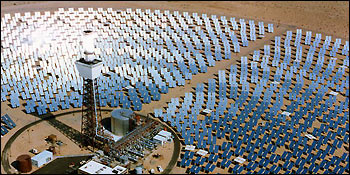 I don't really know if that kind of thing would just cut the Earth in 2 or if we need to orient the mirrors towards multiple points instead of only 1, seems much more feasible than moving batteries. Apart the cost of putting there a so big number of mirrors, seems actually even a really viable solution.

Probably there will be night big events only on full moon nights (to power up stadium lights and people TVs watching the games).

Not the answer you're looking for? Browse other questions tagged science-based planets moons power-sources or ask your own question.

32
Can we 'beam' energy from the moon?
6
Effects of a Moon-sized Sun-Cannon on Earth

32
Can we 'beam' energy from the moon?
8
How do the tides work when the sun powers the moon to keep out evil?
22
Realistic sky of an Earth-like moon orbiting a gas giant (length of day and size of celestial bodies)
9
How would this tidally locked planet be affected by its moon and would the moon have a deaccelerated orbit?
2
Can liquid water exist on the moons of this gas giant?
6
The Earth and Moon resolidify under a bluer star, their outer layers evaporated and burned away. What do they look like now?
2
Harnessing energy directly from the sun via quantum tunneling
4
How would eclipses change (both solar and lunar) if the moon was half the distance from the Earth?
0
In what way could a moon change phases according to the month?