Okay so in the novel I am writing there’s a Third World War fought by the nations of earth against a human space empire (I am overly simplifying this ) . Now the thing is the empire uses transhuman supersoliders as their main fighting force but as the war drags on and becomes a stalemate the space humans use orbital bombardment among other means to make every supervolcano on earth erupt at the same time unleashing devestating amounts of volcanic ash .

Now part of the reason behind this is that their troops are modified to be able to breath in such conditions without the need for breathing equipment. My question is what kind of modifications would they need to safely breath in volcanic ash or at least some of its more dangerous components like sulphur dioxide and carbon monoxide?

The gases are much less of a problem than particulates. You could easily imagine drugs (or evolved adaptations) to make people less vulnerable to carbon monoxide, by increasing the oxygen capacity of their blood or by breaking down the carbon monoxide before it gets to the bloodstream.

But humans have absolutely no way of removing insoluble solid particles from our lungs. It's actually something people aren't sufficiently aware of in real life – any kind of fine airborne dust does permanent, cumulative damage to your lungs. Without radically changing the structure of our lungs, the solution is to beef up the limited defenses we already have to prevent the dust getting in there in the first place (nostril hairs and cilia in the respiratory tract). You basically need HEPA filters in your nostrils (and the stronger lungs and bigger airways to be able to breathe through them).

That kind of filter is very difficult to keep clean. We secrete mucus to bind the particulates trapped by our cilia, and then eject the mucus, but this only works for very small amounts of particulates. To live constantly inside an ash cloud, you'd probably need to make far more mucus than people with cystic fibrosis do (and that's already enough to cause serious breathing problems).

The simpler solution used in HVAC systems is to just replace the whole filter as needed. Perhaps your modified soldiers have a cavity where they just plug in replaceable filters, or perhaps they are able to eject and regrow the filters themselves. Like having a big sea sponge living inside your sinuses.

As I say, this would probably mean that their noses and sinus cavities would have to be much bigger – like snouts – and they would need stronger lung muscles (diaphragm and intercostals), which I guess would make them more barrel-chested.

Nose hair. And lots of it. 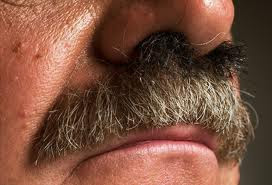 Your transhuman soldiers have tranhumanamazing nose hair. The copious tangled hair is fortified with greasy mucus that serves to make each hair a flypaper like trap for particulates. The mucus stream helps keep the hair from clogging up because fresh mucus enters from the rear and makes its way down through the hair wad, pushing forward and out old particulate-laden mucus. The hairs too grow very quickly, spent and dirty hairs falling down in abundance as new growth presses forward from behind.

This is actually exactly how human nose hairs work. I have scaled it up for your solders, because of their need and because they are transhumans.

Not the answer you're looking for? Browse other questions tagged trans-humanism volcanoes or ask your own question.

34
How can a human cause the Yellowstone to erupt?
1
How to enforce an international ban on the use of human enhancement to one's advantage?
4
A Dozen Cubic Miles of Volcanic Ash--How Big Would the Cloud Be?