Near spherical alien species - How can they move?

On an Earth-like planet but with completely different flora and fauna there is the Great Plain. It is similar in size to the Serengeti National Park on Earth. The Plain is surrounded by high mountains on all sides except where it meets the ocean. Creatures who live there have been isolated for aeons and evolved to its conditions.

For reasons not disclosed here, the seasons have been changing over time. Each year the winter is getting longer and harsher. The animals and plants are continually evolving to adapt.

The flora and fauna

The Fatoids are an apelike creature and when they emerge from hibernation they have the proportions of a skinny human with baggy skin. Their heads are hamster-like and they are furry. They repair their hibernation burrow and set off in search of food. This consists mainly of leaves from the Yumyum tree which grows in groves scattered over the plain. The trees situated near the burrows are soon exhausted and they so they must travel far and wide.

The Yumyum trees enjoy a symbiotic relationship with the Fatoids and benefit from their manure. In return the Yumyum grow edible leaves at an ideal height for the Fatoids.

During the Summer, the apelike Fatoids gorge themselves on YumYum and eventually they eat so much that they become almost spherical. Imagine a chimpanzee's skeleton and other structures completely encased in a huge ball of fat. The usual apertures exist but appear on the surface. The only thing that projects from the sphere is the head.

Once they are at maximum size, (roughly 1.5 m in diameter), they must head back to their burrow to hibernate.

Their only enemy is a large predator species (the Chomptor) that also has to hibernate. It starts off skinny and gets fatter until it too is spherical.

Their underlying anatomy is that of an upright ape. They have the intelligence level of an average pet hamster. They don't use tools. There is no agriculture. They are foragers. Their behaviour is almost entirely instinctual and has evolved over aeons. They have to forage far and wide from their hibernation-hole to find fattening food. Enough Fatoids always survive to perpetuate the species.

Everything is pretty much the same as for the Fatoids except they are carnivores and their skeleton and musculature are based on a quadruped plan. Again they become completely spherical with just the head sticking out. They have sharp teeth and the intelligence and habits of a wolf.

Predators and prey have achieved a balance just like lions and herbivores have on Earth.

When these creatures are ready for hibernation, as far as is known, they can move only by bouncing or rolling. Both are potentially risky because landing on their heads with their full weight could crush their skulls. Rolling over could break their necks.

One would suppose that rolling can only be used downhill and hopping seems difficult to achieve for a sphere. For example Could a remote controlled beach ball hop along without any internal wheels?

How can a slightly top-heavy sphere (without an internal mechanism apart from its skeleton and muscles), make headway for any appreciable distance, even on a horizontal surface? How can it regain an upright posture when necessary?

Some voluntary exterior distortion of the fatty sphere can occur via musculature. Gravity naturally flattens the sphere at the base so when standing, they are holding themselves up with their enclosed feet.

This picture is for scale only. Fatoids contain fat not air. They are slightly furry and have hamster-like heads that project from the sphere. 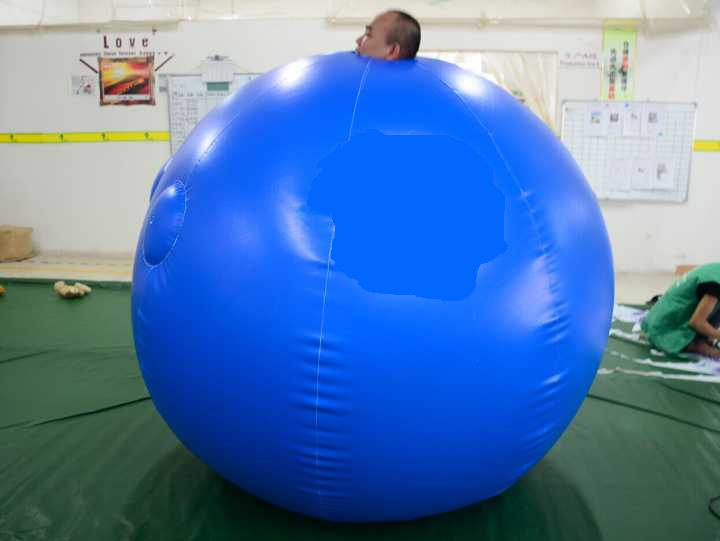 A fat hamster - This shows the general appearance of a Fatoid in terms of fur and head shape but the proportions are as shown above. 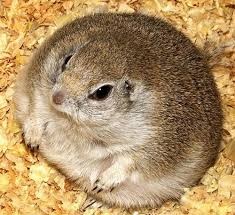 Balloon predator and prey. Note: Unlike the creatures in this video, the Fatoids and Chomptors do not have limbs and tails visible when they are fat. https://youtu.be/yltlJEdSAHw?t=34

Fishes have the swimming bladder to help them control their buoyancy.

The fattoid have a similar adaptation: they have 5 bladders, arranged to form a cross. One central bladder and 4 around it. The central one is slightly lower with respect to the lateral ones (see picture for I hope better visualization) 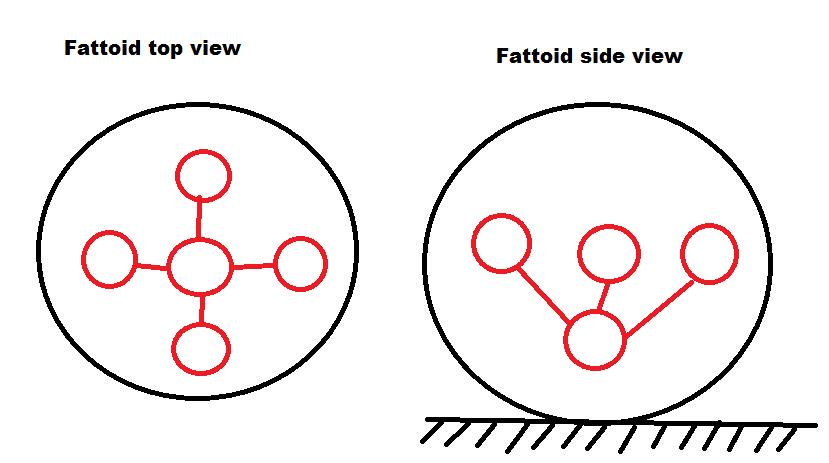 When the fattoid wants to stay upright only the central bladder is filled with water based liquid, lowering its center of mass.

When it wants to roll, first the fattoid fills one lateral bladder to shift the center of mass to the side, and once the tilting starts simply transferring the liquid to other bladders keep the motion (channels not shown in the picture).

To stop, the process is reversed: the liquid is transferred to the back facing bladders until stopping the rotation. Also to regain the upright position the fattoid fills the bottom bladder ending up standing.

It's not a fast process, both in the acceleration and in the deceleration, but normally the achieved velocities are not so high that a fast reaction time is needed.

To protect their head they can pull in the neck, limiting the protrusion, and have developed a thicker skull for additional protection.

Not the answer you're looking for? Browse other questions tagged science-based xenobiology earth-like travel or ask your own question.

15
Movement for a spherical desert creature

8
How would early astronomers prove the existence of a spherical firmanent around the Earth?
9
How could intelligence be balanced with a large muzzle?
8
Aliens selectively breed humans to be bigger. How big could they get and still look human?
13
Anatomically Correct Slinky Worm
3
Is this Martian creature plausible?
7
How could a human-shaped fluid creature move like an actual human?
4
Realistic spinal structure for large headed aliens?
1
Could an organism exist in a vacuum just by temporarily “shutting off” and storing heat?