Hollow Earth - how to measure it?

I'm making a map for my friend - I drew a pretty neat cartographic grid with a proper map projection - and then he reminded me that his world is actually an inverted Earth with a glowing ball of concentrated magic in the middle. The sun is half black, so it creates day/night cycle by rotating.

Now, the question is, because I'm a bit stuck - how could people with roughly Renaissance technology measure the size of the planet (so they could actually draw a cartographic grid)? In our world it's simple, just measure difference in the angle of sun rays between two position of known distance. But what for them? Maybe there are some ways to mitigate it with small changes to the setting?

This actually is pretty easy using the similar methods to what you mention.

The "sun" is rotating, meaning that if you look up at night when the shaded side is toward you, you can see the inside of the sphere where it is still daylight.

You can figure out how long it takes for the sun to rotate once. Lets say 24 hours just for fun.

Then you figure out the distance between two points somewhere along the sphere where you can see them at night, and see how long it takes for the terminator line to pass between them.

The sun in your world is half-bright, half-dark. Assume that it is a perfect sphere with any radius greater than zero. Therefore, for any point on the surface, the percentage of the sun that is facing that point at any given time is

Here are three plots of what that looks like at the equator: 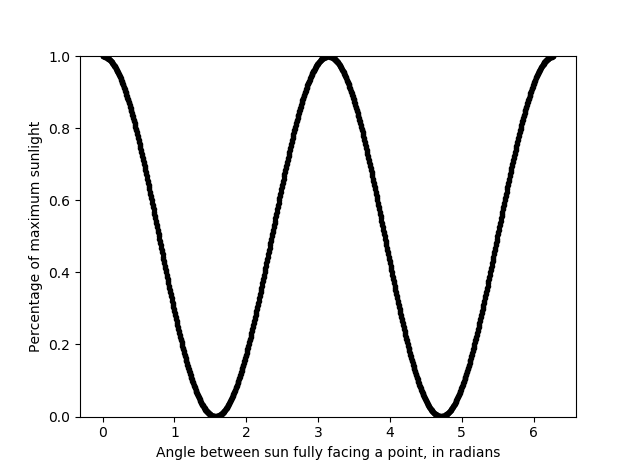 At a point in the temperate zone at about 40 degrees latitude: 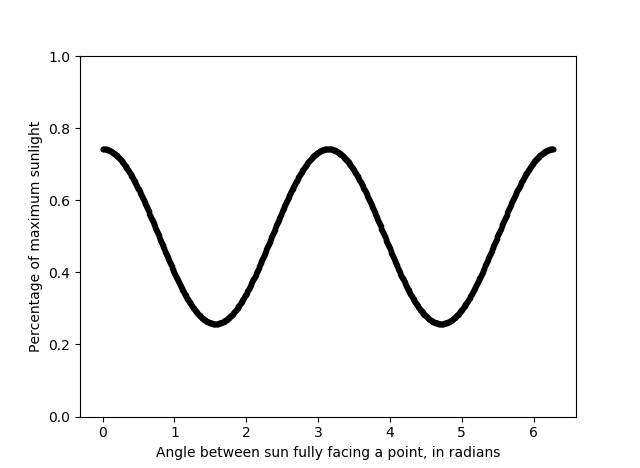 And at the poles: 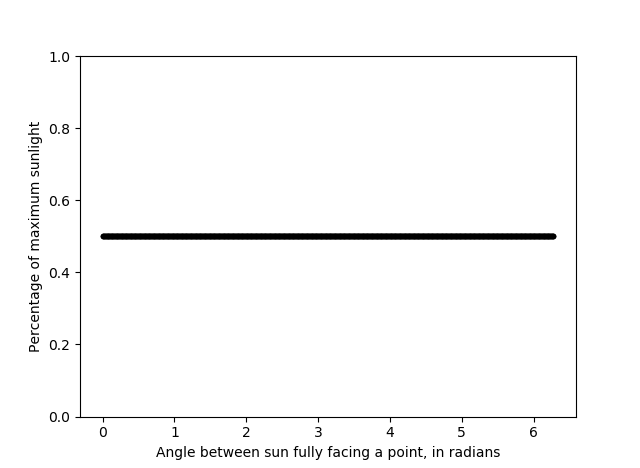 How to measure latitude between two points

Without sunrise over a horizon or a pole star, it is much harder to measure latitude. The best you can do is to measure the brightness of the sun at various points in the day, and to compare with the trigonometeric properties of its brightness from the last section.

The the best of my knowledge, there is no way to scientifically measure brightness until you have a photographic plate. That will not be available to people of Renaissance technology. However, you can at the very least dead-eye reckon brightness, so we will assume some sort of brightness metric. One potential way to measure brightness is that brightness is proportional to the 'bright' portion of the sphere of the sun that is visible to you from your location. If you look at the sun through a dark lens, you may be able to measure this, depending on how large the radius of the sun is.

Now there are two ways to measure radius

Assuming the hollow world is a perfect sphere, there are two ways to measure the radius. you can compare latitude of two points to the distance between them, or you can compare the time it takes the terminator to travel between two points.

The terminator is important here, because with no stars in the background, the only way to ensure that two points are at exactly the same longitude is to visually signal when the terminator passes by the points. This can be done using one lighthouse to signal another point within visual range of that lighthouse. Since your world is hollow and thus concave from the point of view of someone on the surface, the line of sight of a lighthouse is actually very long, limited only by atmospheric attenuation of light (due to water vapor, or whatever).

The terminator can be exactly identified by looking at the sun through a telescope with a dark lens. As soon as there is no bright patch visible, the terminator line has passed.

The latitude way is take two points that you know are at the same longitude, and calculate their latitude using the above method and distance ($d$) between them, using what ever method.

If the latitude delta is $\alpha$, then the polar radius of the hollow Earth is $$r_{pole} = d/\alpha$$ in radians.

To time the terminator, you will need to get two points at the same latitude (confirmed using the methods above), and measure the distance ($d$) between them and the time it takes the terminator to pass between them ($t$). You also need to know the length of the day $t_{day}$.

Then, the equatorial radius of the hollow Earth is $$r_{eq} = 2\pi d\frac{ t_{day}}{t}.$$ Note this only works if the points are less than $\pi$ radians apart on the surface, that is, in the same hemisphere.

These two methods could give you different answers, polar and equatorial radius. If you have a perfect sphere, the two calculated radii should be the same, but if your planet is inscribed within an oblate spheroid with an equatorial bulge(like our Earth), or even a polar bulge, then the two numbers will not be the same.

It is actually pretty difficult to time astronomical pheomena with only one available astronomical object. But, you can use the unique configuration of the sun's surface to do this.

This does require some photometric skills more advanced than what was available in the Renaissance, which I'm not sure how to replicate with Renaissance technology, but I have faith that the Galileo's and Newton's of the world could figure it out. Also, there needs to be some sort of standard measurement of equatorial brightness to make these calculations, but given this number's importance in observational 'heliometry,' I would expect this number to be a well established topic in a Hollow Earth's scientific community.

Two points, a known distance apart, will have a straight line-of-sight between them that will not be parallel to the curving surface. Stand a pole at the centre between the two points. Where the sight line intersects the pole will give you the height (er - depth) of the arc. That will allow them to calculate the radius of their world. Even if they don't have the trig to calculate it, they can always just make a scale diagram and measure it. 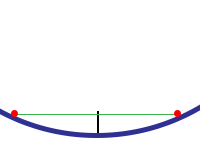 Providing long distance travel is practical, his could be done with pure geometry ( or more easily, assuming the natives had advanced to usable trigonometry). One could measure the distance between two points on the inner surface that are visible from the same location, then travel to one point and directly measure the distance to the other point -- or, lacking trigonometry, one could select two points that are sixty degrees apart (therefore forming an equilateral triangle between the two and your observation point), and know that the distance to either one is exactly one third of the circumference of the world.

Angle bisection could be used, along with long distance signaling (with flashing mirrors, perhaps), to shorten the distance requiring measurement, at the cost of some loss of precision.

If there's not access to the antipodes, one could measure a distance across water (perhaps by surveying around the shore of a large lake or inland sea), and directly measure how much the surface dips below the sight line; this would allow deriving the radius of the sphere directly via similar triangles (same method as is used to calculate horizon distance on the outside of the Earth).

Not the answer you're looking for? Browse other questions tagged map-making sunlight renaissance hollow-earth or ask your own question.