How much energy did it take for God to part the Red Sea?

Why this is a world-building query. If I had framed this as, "In my world where magic requires the expenditure of energy, a powerful wizard decides to open a path through a large lake,etc. The world I am supposing is that God himself can create and destroy energy (or has an infinite supply) but still uses energy to do his miracles and acts of creation. This is different from simply magicking things in and out of existence as the Bible perhaps implies. 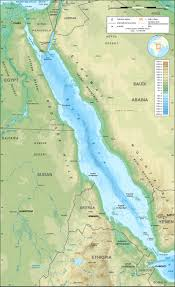 Assumptions for the purposes of this question

We cross where the sea is 100km wide, the depth is 500m at its maximum, the seabed is an arc of a circle.

The corridor for the Israelites is 10m wide. They can walk at a steady pace of 4kph regardless of slope. 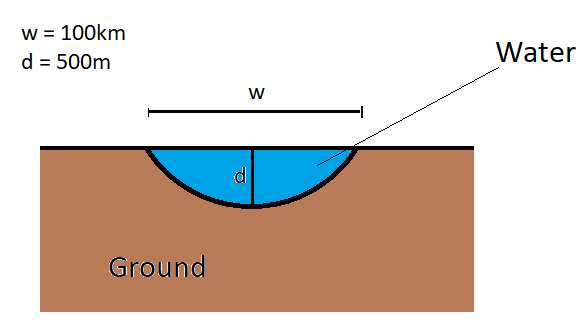 If we simplify by saying they all leave and arrive at the same time:

(b) What will be his total energy expenditure both for opening the corridor and then holding it open?

Redrawing the original diagram to make it clear what I'm assuming the parted volume looks like: 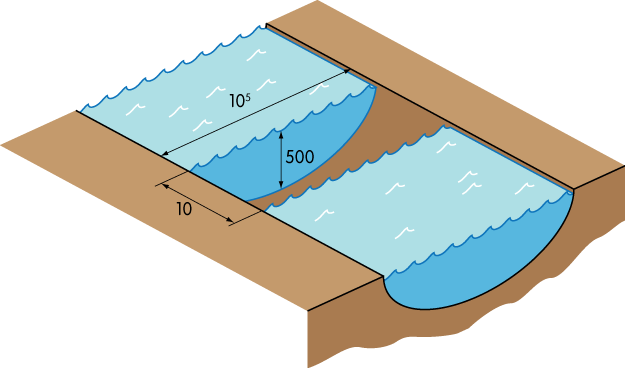 The section through the sea bed is specified to be a circular arc and so, given the constraints, we can work out the radius of the circle using Pythagoras' theorem, and the length of the arc with some simple trigonometry: 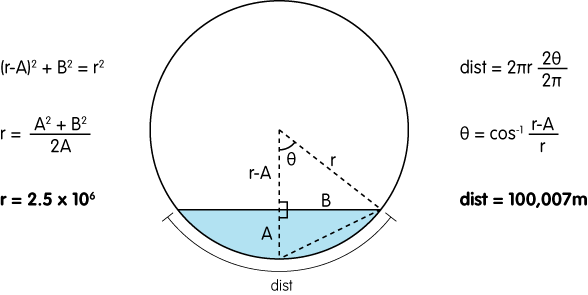 To raise one kg of water by one meter requires 9.81 joules of energy. But the height through which we need to raise the water varies continuously with depth. We need to divide the displaced volume into (infinitely many) horizontal slices – so that each slice is at the same height – and then sum the energy required to raise each slice.

– therefore we can write down the required energy per slice as a function of height.

(I've omitted most of the algebra). The required total energy is then

It's not obvious whether someone who was better than me at calculus could solve that analytically; anyway, my computer comes up with the numerical solution

This does not take into account the energy to keep the waters parted. As others have pointed out, this depends exactly how the miracle is done; if it was done by raising the sea floor, or by creating some kind of wall to hold the water back, those are static arrangements which don't require any energy input at all. If it was more like the Charlton Heston movie – with the water seemingly flowing as normal, but being continually driven back on either side – then that would take considerable power. The description in Exodus 14 mostly sounds like the tide going out (i.e. the sea floor being raised), but verse 29 says "the waters were a wall to them on their right hand and on their left", which does sound more like the movie version.

The energy to continually push the water back would depend on the rate at which it flowed into the evacuated volume, and on the height through which each drop of that water had to be raised to remove it again. A "realistic" model of the fluid dynamics would be beyond me, and probably very complicated, but if we imagine each wall as the opening of a giant pipe, where:

– then (adapting the math for volume flow on this page) we can estimate that each wall is pumping out 9.4x109kg of water per second. It takes 1962J to raise 1kg of water by 200m; multiplying these numbers, we get a power requirement of 1.84x1013W (about 18 terawatts), or 36TW for both sides. That figure seems quite high, but I don't know if it's an error on my part or not; it's certainly true that this would take a formidable amount of power. Anyway, over 25 hours that comes to 1.66 exajoules, or 0.3% of the world's current annual energy consumption.

It might seem like this sort of discussion is moot, or a joke, because divine intervention invalidates the laws of physics anyway. But that's an artifact of the very modern, deeply flawed idea that science and theology are somehow opposites. Enlightenment scientists like Isaac Newton saw them as basically the same thing, and they didn't have a problem with the idea that literal miracles could be reconciled with physical laws. It's actually quite a broad and interesting philosophical area.

One common approach to the parting of the Red Sea, for example, would be what we might now call a "Maxwell's Demon" model. If the universe is completely deterministic (or if, wherever quantum dice rolls are involved, God has manipulated the outcome), then every atom has been ordered, from the beginning of time, such that at the appointed time, the momenta of all the molecules in the Red Sea "just so happen" to be arranged in a highly improbable way that causes the waters to part.

The important thing to note is that this doesn't violate the presumed rules of physics; it's just that God has played an unfathomably crafty game within the rules. Conservation of energy is not violated (implicitly, the energy "comes from" the thermal energy of the surrounding environment). The laws of thermodynamics are not violated because, even though it seems like a huge amount of entropy has vanished from the system, what's actually happened is that there was an entropy deficit all along, but it was hidden – essentially, encrypted – in the state vectors of every particle in the universe from the start of time. This does have thermodynamic implications for whatever was going on prior to the book of Genesis, but that is beyond the scope of the conversation.

There are many other approaches to this sort of question (and to related questions concerning free will), but my point is that if you assume stuff like this happened at all, that doesn't mean you have to throw science out the window.

Time it takes the Hebrews to cross

I'm Catholic, so I think this is a good assumption. God created all things, and he can presumably un-create all things. If God simply wants to un-create the waters in the Red Sea, he can do so, for a net energy gain of $E = mc^2$, per mass unit. But, he can then create those same waters at some distance away and let them simply flow back towards the void that he is un-creating. The cost of creating those same waters is also $E = mc^2$.

Normally, I would say that expecting a process to be 100% thermodynamically efficient is silly, but we are talking about God here. So assuming that God is omnipotent, and that he can create and annihilate matter with perfect thermodynamic efficiency, then the net energy cost to God is 0, to hold the waters open for any amount of time.

Sorry, but if you want me to assume God is not omnipotent, you will have to put it in your question and I will edit this answer appropriately.

How long does it take?

*Remember the assumption in the question is that they all leave and arrive at the same time.

How much energy does it take?

Regardless of how this water gets there, it will, from an energy perspective, need to be lifted to the surface of the sea, so we'll need the centroid of the water being moved to see how far it needs to be lifted. The formula for the distance from the bottom of the sea to the centroid is $x=R-4/3 \times \frac{R*sin^3(a)}{2a-sin(2a)}$, where $a$ is the angle $a=tan(\frac{50}{R})$. Doing the calculations, $x=0.3 \text{ km}$. So the height that the water will be lifted is

(a) is a deceptively complex question. This is basically a fluid viscosity problem comprised of 6,000,000 units (600,000 men + wives + children + "mixed multitudes" + flocks + herds). With the mix of variables between children, elderly, chaotic animals, bathroom/rest breaks, coral, mud, hectic terrain, etc you are going to see huge swings in crowd viscosity. I would think that traffic flow would essentially be stopped (at least in part) for much of the trek through the corridor.

Realistically I would estimate that at the far end of a 100km x 10m corridor the exit rate would be 10,000 units per hour. In total it would take about a month to get everyone across.

With perfect coordination and flow, no accidents, breaks or interruptions, and every man, woman, child, and beast willing to walk day and night it would take a little over 4 days for everyone to cross.

With densely packed units (only 0.5 square meters per unit which includes their food, water, and possessions) perfect coordination and flow, no accidents, breaks or interruptions, and every man, woman, child, and beast willing to walk day and night it would take a little over 4 days for everyone to cross.

(b) Whatever energy it takes to create or destroy energy can be created to supplement the difference. The net result is zero.

kingledion pointed to an intriguing possibility within their answer: The stupendous amount of energy could be supplied with help of Maxwells demon, who somehow sorts the water molecules acording to speed etc. to generate useful work.

The relationship between potential (=height) and thermal energ in water is fun to ponder.

Not the answer you're looking for? Browse other questions tagged hard-science energy gods or ask your own question.