Explanation as to how 4 species were wiped out close to extinction?

In my epic fantasy I have four races of creatures which were all hunted down due to their valuable blood which grants the drinker magical abilities (premonitions). After time they all became extinct or near extinct. I want an explanation by which these animals could have been all wiped out. They all live in different continents which makes it hard. Your suggestions don't all have to be similar, they can be different ways to hunt down different creatures.

I have 4 species of creatures, and only a few specimens of each are left alive:

All of these animals are vicious.

There is obviously magic in my world, but only ESP/visions, nothing that would aid in hunting these animals. 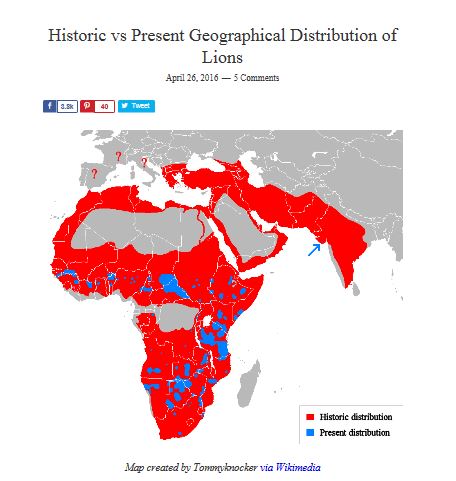 Your fierce creatures disappear for the same reason fierce creatures in the real world disappear. Humans hate and fear them. These creatures compete with us for wild food. They show up and eat our livestock. They take children. They are scary. We huddle around the fire and use our amazing brains to figure out ways to trap them, poison them, and hunt them. We outcompete them for prey. We make walls and exclude them from their old territories. Nothing has a chance against humans.

Your sea creature is the one exception. Those might evade us until we kill off all their natural prey and they had nothing left to eat. Or if they are tasty or full of oil (or both!) we might hunt them down as well.

Whoever drinks their blood gains magical abilities. What other reason do people need to hunt these creatures to extinction? Rhinos are endangered animals because there are a few rich nut-jobs in Asia who, besides having no scientific proof whatsoever, think their horns have magic powers. The magic power of your creatures is a proven fact.

People with some forethought would have tried to domesticate and breed these animals to ensure a supply for future generation. So what you actually need is a reason why nobody ever did that successfully. Possible reasons are:

Here is a list of creatures that went extinct shortly after Man colonized their habitat:

What more explanation would you need?

When was the last time you saw a mammoth roaming Europe? What about a sabre-toothed cat in America, a car-sized armadillo or lion in Peru, a giant owl in the Caribbean, or a 7-metre goanna in Australia? All these animals, along with many, many, many more, were hunted to extinction by humans, and yet are spread wide and far across the globe - with Antarctica and Africa being the only places where megafaunal assemblages have not been disrupted by humans.

In Australia, the change has been most profound, with about 90% of the native species weighing over 44 kg being wiped out by humans. You said they were hunted for something valuable - if it's valuable dead, then nothing can stop the relentless drive of humans to hunt them down.

You don't need an explanation, you already have one.

Not the answer you're looking for? Browse other questions tagged fauna mythical-creatures extinction or ask your own question.

7
If thunderbirds were real, how would it affect shepherds and ranchers?
3
How does an Alien world have Earthlike creatures?
5
Living on a Giant Tree - Animals
11
Building a Giant Spider
16
How can I figure out the territorial needs for my Werewolves?
10
How CAN we scale up living creatures to be giant sized?
6
Alternate paths to orthostasis