What would the night sky look like for a world on the upper plane of the galaxy, near its rim?

I would like to include a world in a story that is located on the upper plane (or bottom, doesn't matter, but call it upper for the sake of reference) of the galaxy. If you think of the galaxy as a cookie, the world is on top near the rim, not in the middle of the cookie.

I could imagine that inhabitants on the northern half (call it the "top" or the furthest away from the center galactic plane) would experience a nearly perfectly dark night sky (ignoring moons) other than, pretty much, other galaxies.

I could also imagine the inhabitants of the southern half (call it the "bottom" or the closest to the center galactic plane) would see the galaxy (if rotation were in the right position) as a tear drop, with the brightest part near the horizon and the darkest part of the tear "straight up."

For reference, we Terrans see the galaxy as a band in the sky, I suspect because we're in the middle of the cookie.

My question: am I right to imagine the night sky for this planet? As I said, ignoring any moons, dark but other galaxies (very sparse "starlight") on top, and a teardrop view of the galaxy on the bottom (if rotated correctly) or a smattering of stars and galaxies (if not rotated correctly)?

What I'm hoping not to hear is, "Nope, your planet would need to be a bazillion miles above the plane of the galaxy to get a view like that..."

How many stars will you see in the direction of the edge?

I downloaded from Hipparcos the distance and visual magnitude of all stars with magnitude 6.5 and below. This is roughly the number of stars visible to the naked eye. Here is a plot: 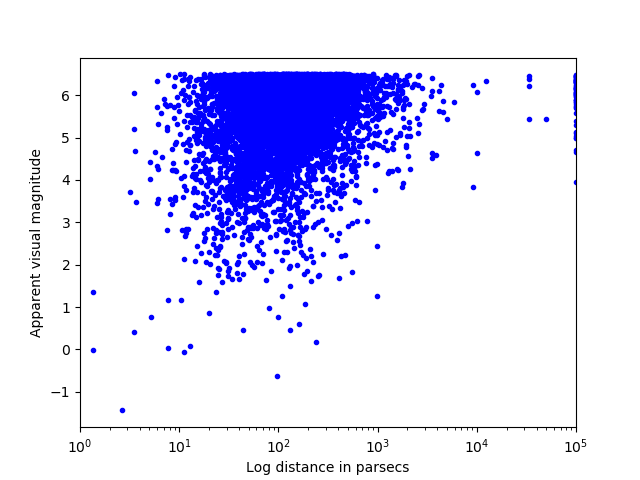 (Note: some stars are listed with a negative parallax, for various reasons. I lumped them all together at 1e5 parsecs distance, so as not to weirdly distort my graph)

Now, lets say that you are in the upper 1% of the galaxy. Lets cut the list of visible stars down to only those within 10 parsecs. 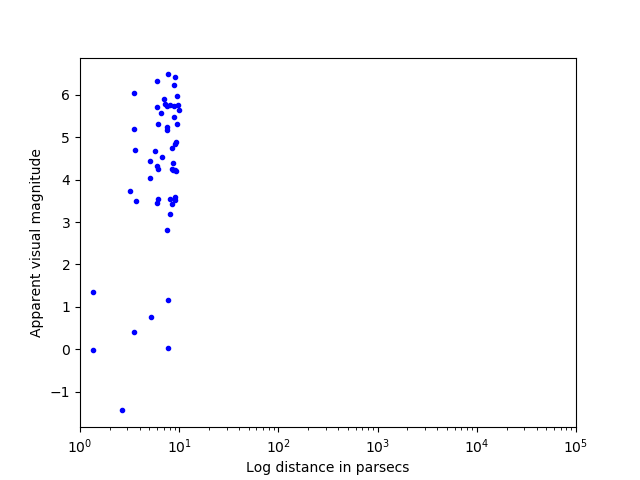 First off, there are only 53 left, less than 1% even. But, interestingly, lets compare only those 'brightest' stars, with magnitude 1.5 or less: 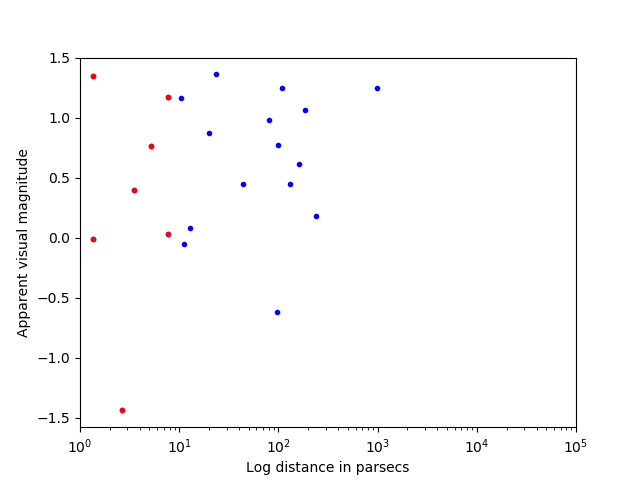 7 out of the 22 brightest stars would still be here, if we removed all stars more than 10 parsecs away.

If you move a planet to the edge of the galaxy, you will largely have an empty sky in the direction out of the galaxy. But not totally empty. While the total number of stars visible in the direction of intergalactic space would only be perhaps 1% of the total we see here on Earth, you will still see maybe a third or more of the brightest stars. Not enough for constellations, but enough to give them cool names like "Sirius" and "Procyon" and so forth.

Such a world would have to be really above every other star system in order to achieve the vision you have.

Even then, you would still need a special arrangement. Stars orbit the galactic core just like planets orbit stars. The core is at the center of the orbital plane, meaning that if your star system is at the very top of the galactic disc, it has probably been - and will be again - at the bottom at some point during its existence. Planets tend to have their rotation aligned with the rotation of their parent star, which tends to be aligned with the star's orbit plane. That's the case for six of the eight planets in our system. Your hypothetical planet would most likely be so tilted that in one "day" its inhabitants would have both the dark intergalactic space and the bulk of the Milky Way over their heads.

By the way, the stars farthest from the core are poor in elements heavier than helium. Your planet would probably be a gas giant, though statistically there should be the odd rocky planet here and there. Maybe a captured rogue planet.

Last but not least, the intergalactic space would not be so dark. There are some dwarf galaxies orbiting ours, and they are eerily beautiful. The most famous ones are the Magellanic Clouds, the bright patches in the picture below: 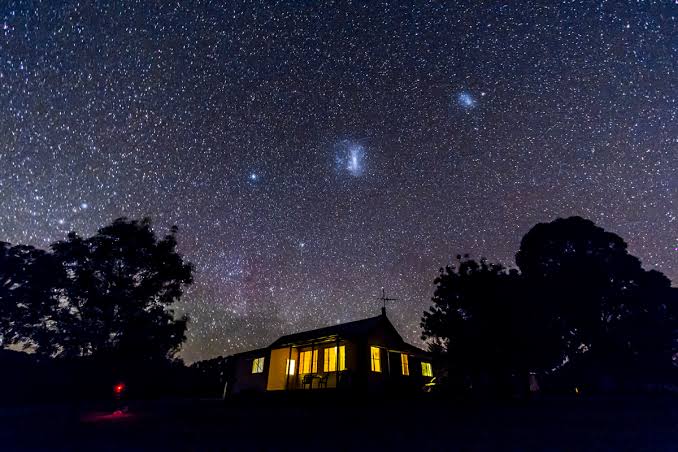 I imagine that in a sky without other stars, and with little to no light pollution, those galaxies would seem to be even brighter to the naked eye.

If the planet is actually at the edge of the galaxy then what you see depends on the axis of rotation.

(a) If the axis of rotation of the planet is along a line that passes through the centre of the galaxy then Uppers will have a relatively empty sky and Downers will see a full sky.

(b) If the axis is normal to the previously mentioned one then there will be some interesting 'dawns' that happen during the night when the galaxy rises over the horizon. These will appear differently in different parts of the planet's orbit round the star. When the inhabitants view the galaxy from behind their sun the galaxy dawn and the solar dawn will be simultaneous. When they are between their sun and the galaxy, the dawns will occur 180 degrees out of phase and so you will see a night dawn of their milky way followed by a sun dawn 12 hours* later.

Not the answer you're looking for? Browse other questions tagged planets galactic .

63
How could a planet have a sky without stars at night?
32
Which goods make sense to transport over interstellar distances?
4
How far above the galactic plane could an Earth-like planet develop?