I'm no rocket scientist, but I've been reading up on some basic concepts of rocket science (including some great talks here). As far as I've gleaned, there's two extremes of rocket thrusts: high speed/low mass (like ion engines) and low speed/high mass (like chemical rockets). While an ion engine, fer instance, could get you going really fast in space, it doesn't have the mass ejected to lift you out of a gravity well. A chemical engine can do that, but unfortunately requires a much higher mass of fuel to be taken on the trip.

My hypothetical scenario for my fictional world is spaceships equipped with ion drives (or similar) for space travel with most never intended to land on a planet. Those that are, however, (like shuttles or my hero's small trader ship) have an additional set of chemical rockets to do the landing and taking off from a planet's surface.

My question is, is that an efficient idea? In very broad strokes, could there be a saving of space and fuel by having smaller rockets and fuel just for gravity evolutions and the more efficient engines for space? Or is space travel such a non-thing compared to the power needed to lift off, that you might as well use the chemical rockets in space too?

Take your idea to its logical extreme. Most ships are large, built in space, and stay in space. They are powered by advanced ion drives, or some sort of nuclear propulsion that you couldn't take into an atmosphere without irradiating the planet.

Then to transfer to and from the planet, the big ships can either make use of local ships that ferry cargo from planet to orbit, or they carry their own shuttles to do that job. Alternately, use a more advanced surface-to-space transfer, like a skyhook or space elevator.

You specify shuttles and trader-ships. If the planets being visited are set up for interplanetary trading then presumably you park in orbit in a designated zone, fill up with fuel and sausage and chips (fries). Then you head to the rental office and hire a rocket-drive module for descent to the planet's surface. This saves unloading your craft and reloading into another one. Undock your space-drive, put it in a secure storage facility and hook up to the rocket drive.

If you're visiting a far-flung planet with no facilities then it's going to depend on a lot of factors such as gravity, atmospheric density and so on. Probably specialist vessels will be needed for these outposts. They will be designed specifically to cope with the conditions at their destination. It's quite likely that they will be larger vessels with a smaller planet-going ship in the hold.

What your asking is entirely possible, you can fit multiple different types of engines onto a spacecraft, from liquid fueled, solid rockets, on ion engines

Your a space trader, you visit Space Stations orbiting the Earth and other planets where most trade and space commerce occur, but occasionally you need to fly down to the surface to pick up goods, so you have a shuttle. a craft that can travel between the surface and orbital stations, AND between planets. And thanks to that you can be the best space trader in the system if not the galaxy... except You're broke!

Alas yes it is entirely feasible, but is it practical?

Humans have tried the shuttle idea, and while it was indeed a monumental success of engineering. it was a horrendously expensive way to get anything to and from orbit, that's why NASA have switched to the disposable SLS, and companies like SpaceX have the their own rockets like the falcon, both are far cheaper to build and run then the shuttle, then consider that during launch you'd have to drag some (presumably) big ion engines off the ground and into orbit which means extra weight and therefore more fuel needed to reach orbital velocity. then once in orbit, you switch to your ion engines, but are now dragging along your big heavy liquid fuel engines which means extra weight and therfore extra fuel.

Simply put having someone do it with two separate vehicles, one to reach orbital velocity and then offload it onto one to go between planets is far far cheaper then a single multi-use craft.

I know that sounds like a grass is green water is wet sort of comment, but if you have a spacecraft that weighs X needs to reach orbit then you need Y amount of fuel, simple put that fuel in... ah but then your craft now weighs Z (X+Y) so you need to add more fuel to get that craft and its fuel despite it always getting lighter moving. thats why the Saturn V was as big as it was.

Now consider that you need to take off, carrying extra fuel and extra engines, but thats a lot of extra weight which means needing to spend more on fuel, which you'll need to incorporate into the tendering process of when you price for work.

And before anyone comments what about the fact that the Saturn V had loads of different engines that was staging, the spent stages were dsicarded as it climbed, this is no where near efficient enough on an SSTO

I'm uncertain of the exact size of your spacecraft, but it is possible for a plane to fly into space.

The basic answer is to fly as a plane to a fairly high altitude, switch to rocket engines to accelerate to orbital velocity, then swap over to more efficient ion engines.

Landing depends on the kind of atmosphere. If it has a thick enough atmosphere it can be approached and used to aero-brake. It might take several passes to reduce overall velocity to safe levels to attempt full re-entry. The final approach would work like a space shuttle. Angle up to 40~ish degrees slow down as you descend. At some point swap over to powered flight (if possible). Or land it like a space shuttle.

If there isn't any atmosphere, hopefully you brought enough fuel to actually perform a safe deceleration and landing.

It all depends on weight

The initial planners of the Apollo missions considered all sorts of options. For a while, a 'direct ascent' vehicle was considered. It is basically a large rocket that takes off and lands on the lands on the moon in one vehicle, which could still be staged at lift-off. An early artist example: 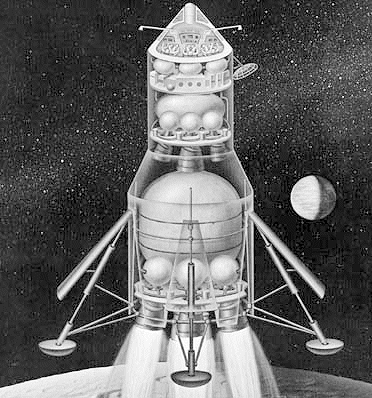 This is mainly because of weight. More weight = more fuel, and already the enormous Saturn V launch vehicle or even a Nova class was required to launch a relatively small payload (just 3 crew). In the vacuum of space, you do not need atmospheric shielding as your launch vehicle or command module do, takeoff and re-entry into atmospheres is a violent process. By using the Lunar module, you could save enormous weight by having paper-thin walls, lightweight engines and minimal fuel. They even discussed having 3 legs instead of 4, but thought that they needed the redundancy of 4. A lightweight craft was also much easier to handle and control.

Encasing the module in the takeoff/reentry stage cylinder meant it was protected during this phase, meaning a command module / lunar module docking procedure needed to be done in space, however this complication was deemed worth it for the weight and fuel saving. In comparison, this early diagram compares the relative size between DA and LOR:

Even the Soviets, with their independent space agency, went through all the options and reached the same conclusion.

So to answer your question, combining the two doesn't make sense when a simple docking / undocking procedure (which was accomplished easily in the 60's and 70's) could enable you to save enormous weight and fuel expense, reduce spent engines and shielding and be much more controllable.

Not the answer you're looking for? Browse other questions tagged spaceships rockets .

14
What is a good way to estimate the mass of spacecraft?
3
Logistics of manned Europa exploration?
19
Runaway Starship Ramps
8
Protecting Space Ships
42
How can a space station prevent docked ships from irradiating each other or the station?
12
Man-portable anti-satellite weapon
19
Is it necessary for spaceships to include reverse thrusters for deceleration in space?
3
How big should I make my space fleets?
9
Is my space combat system realistic?
7
Reactionless Drive WITHOUT Breaking the Universe?