What biological trait could make a humanoid species more likely to be matriarchal, but keep reproductive compatibility with other humanoids?

The original idea was a race of matriarchal desert nomads, but most desert nomad societies I could find as inspiration were strongly patriarchal.

I can change this aspect if I don't find a way to make it plausible, but I'd rather not since it's already incorporated in the worldbuilding. It doesn't need to be absolute -- I just need a plausible explanation for at least 70% of this species' societies being matriarchal.

I would also appreciate some environmental factors which would favor matriarchy.

Biological lifelong pair bonding (monogamy). This is rare, but does happen.

At least one reason males seek dominance in a society is to increase their access to mates, and thus have more children then other males, thus their genes are increased in the next generation.

Due to sexual differences between genders, only males tend to do this; specifically in humans a female can only give birth to perhaps twenty children in a "sexual career", but a male can father thousands of children in his sexual career. Therefore, there is an evolutionary upside for males to mate with as many women as possible, but there is no evolutionary advantage for women to do so.

Due to this dimorphism leading to competing mating strategies for spreading one's genes, men (and males in most wild animals) exhibit aggression and dominance over other males, to prevent them from mating and secure more mates for the "alpha". By the same token, in humans with a culture, it serves men to dominate both men and women to ensure their own ready access to reproductive opportunity.

This is true whether the result is the actual production of many children or not; the instinct to take control and subjugate others (by brute force or intelligent strategy) is still there, and stronger in males than in females.

An antidote for that, as a trait, would be lifetime pair bonding, eliminating the need for men to compete for women. Excerpts from the link:

The few animals that do stick together are providing scientists with valuable clues about the biological basis of fidelity. One of the most studied animals in this regard is the mouse-like prairie vole. A male vole will prefer to mate exclusively with the first female he loses his virginity to. And his faithfulness approaches a kind of fanaticism: Far from trying to woo other females, a mated male vole will actually attack them.

In recent years, scientists have traced these unusual behaviors to levels of certain neurotransmitters in the rodents' brains. Interestingly, one of these, dopamine, is also implicated in drug addiction in humans.

That's a plausible explanation for your species too: The female chooses a virgin male, and (biochemically speaking) the male becomes love-addicted to the female for life, he doesn't want to mate with any other female, and the only way for him to get his sex-fix is to please her, which he wants to do. He's literally not capable of being attracted to or aroused by another female.

In a way, you extend the "fallen into crazy love" phase of the relationship indefinitely, for the male. As part of pleasing her (and not suffering from the withdrawal symptoms of being denied sex with her) he lets the woman be in charge and make the decisions.

The Mosuo people of China are descendents of nomad from the Tibetan plateau, a steppe or semi-desert area, so it seems to fit your description. https://en.m.wikipedia.org/wiki/Mosuo http://factsanddetails.com/china/cat5/sub87/item182.html#chapter-1

The society is matriarchal though it seems to emanate from some historical and social circumstances. They are basically just the same as their neighboring people, and a Mosuo child raised in a "normative" family would behave the same as the adoptive one. Those traits are cultural and unlikely to be genetic.

The second link states that men were herding the cattle and livestock. Put that in your desert or semi-arid setting of your people. The man travels long distances in search of pasture, and the woman stays at home, tending her children and managing her household. That makes the mother a more dominant figure in the house. As the father is absent next of kins take care of the household.

But what I do know is that the status of women varies greatly among human societies, both past and present. So I will not speak about fictional alien humanoids, but about real human societies.

What is a "matriarchal" society? Do the English count? After all, their monarch is a woman, and their prime minister is a woman too. But, alas, the English do not live in a desert, quite the contrary; they notoriously live in a green and pleasant land, or so thay say.

As luck would have it, we actually do have here on Earth a relatively well-known example of desert nomads who live in a matriarchal, or at least in a very non-stereotypically-patriarchal, society:

Bonuses: they have an actual noble class; they keep slaves, modern sensibilities be damned; they have a very good-looking flag; they speak Berber languages, written (sometimes) with a deliciously exotic alphabet.

To be as realistic as we can, we can look at the closest non-extinct relatives to homo sapiens we have on our planet. Our closet relatives (as we believe today), are 4 species, in 2 categories:

Unfortunately for your story, none of these have a natural habitats in the desert, but they are as human like as we can possibly get, while still having real data to look at.

As it happens, these 4 species have variations in gender roles. One of them in particular does have (quite famously) a very strong matriarchal aspect: bonobos

It therefore becomes interesting to investigate bonobos closely, and see what other traits they have. Establishing causality is not straightforward of course, but this has not stopped people from using bonobos to argue for their favorite trait as the cause for matriarchal structure.

On the topic of sexuality, bonobos second most famous trait, is their sexual frivolity and absence of long term bonding. Bonobos are, according to Christopher Ryans book, "sex at dawn", the only other species observed to indulge in large scale recreational sex.

Perhaps there is some credence to the logic that if there are no long-term relationships, there are no need for males in patriarchal societies to defend their women and thus adept to less dominant behavior. Also, if there is no sexual frustration in the male population, the male violent tendencies may be decreased, and females can form the kind of "committee leaderships" found in Bonobo social structure.

I do not believe that is anywhere near the full story for humans. Nonetheless, for your story, having a plausible humanoid species on another planet be more matriarchical, I believe it could be a good idea to make them more Bonobo-like.

EDIT: I did mention that the Musou people are referenced in the book by Ryan, but quickly removed it. I have heard some find it offensive.

Many societies that appear to be patriachal in fact aren't.

For example, among European farmers, there was a strict division of labor and power. The man ruled over the work on the farm and the farmhands, the woman ruled over the house, the children, and the scullery maids. Basically, what you had were two areas of government that were largely independent of each other. And who prevailed in things that had to do with the whole farm depended on the personality of the man and woman and their arrangement.

Similar differences could be found among some of the Native Americans. While the male warriors appeared to be dominant to outsiders, because they were the ones who talked to them and made decisions of war, in some tribes the women (or a conference of men and women) ruled the tribe in peace or in interior matters.

So maybe you can differentiate the roles of men and women a bit, give each different areas over which they rule. Patriarchy (and matriarchy) seldom are the absolutes that they are made out to be.

Postulating a cognitive aspect to sexual dimorphism, where the females are the brains of the clan/tribe/species. Couple this with males being subject to musth, like elephants - where their sex hormonal drives are so strong they cannot be entrusted to leadership. Highly intelligent matriarchal societies would have more subtle ways of co-opting the males into cooperation, including withholding sex, ritual restraints, cultural taboos.

Postulating a reproductive bias toward females which tends to keep males in the minority within populations.

Postulating the female controls paternity, as a means of modulating male behavior, enhancing female control at the most basic level.

Postulating females as the larger of the sexes (as in hyenas). Perhaps the most plausible.

Men are stronger physically which enables them to force their way into leadership. If women were physically stronger, the roles would be reversed. 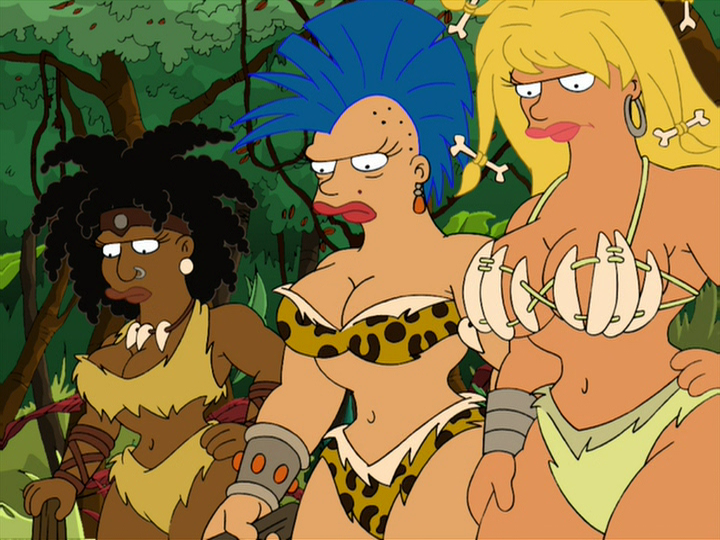 If women were like the Amazonians then the men would have to toe the line or death by snu-snu.....

Make them an egg laying species.

Most mammals are polygynous: a male has a 'harem' of several females. They are typified by the males being bigger than females, fight other males for access to females, and fathers provide little or no help in raising the offspring. The reason for this is that dad cannot directly provide for his offspring during the long gestation period (pregnancy) of a female mammal, nor during the lactation (breast feeding) phase. He can feed mum, but he can't feed the baby. So for many species the male strategy is to mate with mum, then ignore her and go look for another female to mate with.

In contrast, most bird species are monogamous. An egg is a pregnancy which takes place outside the body. Female birds lay the eggs very quickly after mating (compared to the gestation period of a mammal of the same size). Once they are laid, the eggs have to be incubated, but either mum or dad can sit on them. When the chicks hatch, either mum or dad can feed them because they eat 'adult' food from day one. If your aliens lay eggs, then picking which of mum or dad (or younger sister or brother) stays at home to look after the kids can be cultural.

They'd have to have all sorts of cultural traditions about keeping the eggs cool in the desert heat and warm in the desert night. Also for transporting them without breaking them!

Alternatively, make them marsupials, but it is the males which have the pouches with the teats inside them (a mammalian version of a seahorse).

Here's an idea based on Amadeus's post. What if the species in question is like a kangaroo, where the female has several vaginas and can be pregnant with multiple babies at different stages of pregnancy. The males could gather around and hope their actions will lead to being chosen to mate with her and pass on their genes. Or you could just go with a social insect society where the queen is the only fertile female and have the drones a bit more numerous, maybe even traded with other queens for resources.

Not the answer you're looking for? Browse other questions tagged biology culture fantasy-races or ask your own question.