Let's take it point by point.

Gravity from walls would make people near the cylinder end feel like cylinder centre is downhill. Let's ignore it at the moment. So let's think about a thin slice thorough th middle for a moment: 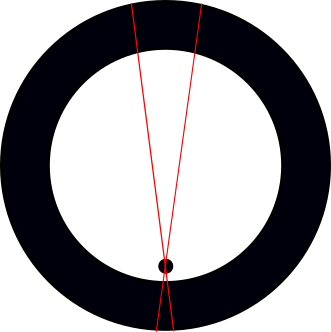 Gravity increases or decreases with h3, where h is distance from certain point above or below. At the same time, amount of ground that pulls you in a slice decreases or increases with h2. So if you are 2 times closer to the middle depth of bottom than top, bottom will pull you 2 times stronger. 3 times closer? 3 times stronger. How important is gravity from the wall? Well, for 35km sphere of density similar to Earth crust, surface gravity is about 0.01g. You said You may ignore the gravitation of the cylinder's wall. and now I'm gonna do just that - ignore. Change in the order of magnitude of 1% change is not really worth it at the moment.

You want gravity experienced to be that on Earth, and difference from feet to head similar. OK. "Gravity" experienced by inhabitants is

$a = -\omega^2 r$ where $\omega$ is the angular velocity of the station, $r$ is its radius, and $a$ is linear acceleration at any point along its perimeter. source

where $g$ is surface gravity of Earth, and $a$ is "head gravity" of Earth for 2 meter tall human.

Thus, we have two equations with two variables:

With this radius, you will have the same proportion of perceived gravity between head and feet you have on Earth.

Warning! Earth radius is 6371km, and your cylinder has radius of 3185.5km! It is truly a planetary scale construction!

Coriolis force experienced when moving on the surface in parallel to axis will be 0, because it only appears when motion is not parallel to rotation axis. Earth is roughly a sphere, so any motion not exactly on equator and perpendicular to it will experience Coriolis force - 0 is possible only for infinitesimally small distance and infinitesimally small time, when in cylinder you can have 0 for the whole cylinder length.

For up and down motion on the equator, effect will be opposite: in your cylinder, going up will mean smaller radius. On Earth, going up means bigger one. These effects will also probably have different magnitudes, but since I already proved that having identical is impossible, I'm going to leave calculation of absolute values as an exercise to the reader. 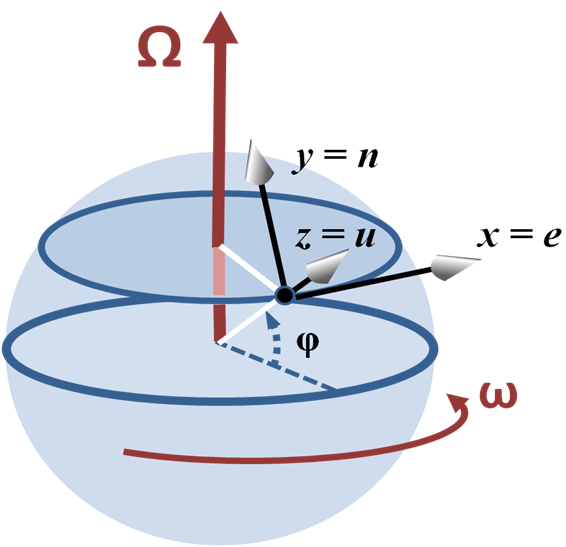 It is possible to find a radius and angular velocity that satisfies the conditions very closely. As stated in another answer, the head-gravity and feet-gravity for a 2m human comes to 3185501.499 m radius, 0.00175460427 rot/s. I have not rigorously verified these numbers, but at a glance they seem correct. HOWEVER, where the difficulty arises is that in an O'Neill cylinder (or any rotating system) the centrifugal force in the rotating reference frame is directly proportional to the radius, whereas gravity above a planet falls off with the square of the distance. This means that if you were to plot the felt force at any height off the ground, you would see the following two curves: 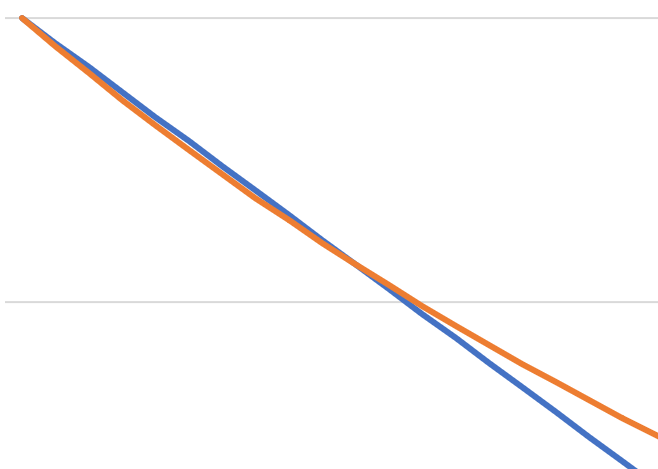 As you can see, the straight line curve of the rotating habitat's "gravitational" force as one moves from the floor to the center can be made to intersect with the inverse square curve mapping the gravity field of a massive body at only up to two points. Between these two points, the gravity in the habitat will be greater, and above (to the right on the graph) the higher elevation point (also below the lower elevation point, although "below the floor" in a rotating habitat is not a fun place to be) the gravity on the massive body will be greater. So in effect, the numbers above hold for the force at any person's feet, at ground level of the habitat. And they hold for the 2m height. However, any other person of different height will feel a different force at their head level, and even the 2m person will (if having a sufficiently sophisticated sense of weight around their midsection) experience more downward force toward their middle in the cylinder than on Earth, even while experiencing equivalent force at their head and feet.

For a cylinder of this magnitude, or any where the radius is this significantly greater than the height of the people involved, the difference between an inverse square curve and a straight line is imperceptible on the human scale.

9
Is this station design likely to cause balance or vertigo issues?

24
What minimal radius is needed for rotation to simulate gravitation without adverse effects on humans?
12
What would the weather be like in an asteroid habitat?
12
Stabilizing a McKendree Cylinder Habitat
1
How tall do atmosphere retaining walls on rotating space habitats need to be?
8
Gravity differences on asteroid with an O'Neill cylinder
9
Vertical cyclones in a rotating space habitat
10
Hurricane-force winds or gentle breezes in an O'Neill Cylinder?
6
How to allow a cylindrical habitat (O'Neill or McKendree) to radiate heat to space?