An animal that is physically separated into multiple parts

One of my fictional planets (which is largely terran in nature) is notable for an unique animal. Said animal is a dangerous predator that is notable for several things:

While a process of "evolutionary assimilation" is presumed to be the origin of chloroplasts and mitochondria, the formation of a creature like described above is certainly the result of a reverse process, in which an animal's organs are separated from its body and become semi-independent in their function while de facto staying parts of it. All three parts - the hunter, digestor and reproducer (and any arbitary additional "castes") are dependent on each other in the long term, as most vital organs are "separated" among them.

The only organs every part will have will be those required for immediate survival. Among the already mentioned circulatory systems (with individual hearts, of course) and lungs, each part would probably also have an excretion orfice.

Note: it can be assumed that the immobile parts protect themselves from enemies by means of a strong venom or hunters who stay in the nest for security purposes.

Sounds like a miniture bee swarm. You have highly specialized individuals who all work for the survival of the whole swarm.

According to your description, you will end up with a slightly bigger swarm than just 3 individuals:

And that's exactly how it works with bees, ants and termites. You only need one reproducer hatching egg after egg. You only need enough digesters to feed your swarm, no need for a 1:1 ratio. What you need are many of the hunters. They bring nutrition to the digesters and defend the stationary individuals from physical danger.

The advantage of this specialization is a reduced energy demand and reduced risk for the whole species. Solitary mammals have to hunt their own food, find a good mate, nurse their offspring while hunting enough food to produce enough milk and if the mother dies, the offspring often dies as well.

Your specialized animals share the risk of reproduction. Only one individual has to ingest enough food to produce eggs. The hunters are not burdened with embryos and if one hunter dies, the offspring will survive nevertheless. If all hunters have a bad day and don't catch anything the digesters can still feed the swarm for a limited time.

One disadvantage is that if all reproducers of a swarm are killed, the swarm will eventually die. Insect swarms produce a new queen, but this seems not possible for your aliens.

Another disadvantage is the location of reproduction. Since 2 of 3 casts are stationary, the swarm cannot relocate to another territory when the food sources run out or when natural catastrophes endanger the survival of the stationary individuals. If you make the hunters spread the eggs in their territory, the swarm will grow to a size that is not managable anymore. Some digesters or reproducers might be forgotten and die of starvation simply because they hatched too far away from the center of the territory.

What you describe sounds like the Portuguese man o' war

The Atlantic Portuguese man o' war (Physalia physalis), also known as the man-of-war, is a marine hydrozoan of the family Physaliidae found in the Atlantic, Indian and Pacific Oceans. Its long tentacles deliver a painful sting, which is venomous and powerful enough to kill fish or, rarely, humans. Despite its appearance, the Portuguese man o' war is not a true jellyfish but a siphonophore, which is not actually a single multicellular organism (true jellyfish are single organisms), but a colonial organism made up of specialized individual animals (of the same species) called zooids or polyps. These polyps are attached to one another and physiologically integrated, to the extent that they cannot survive independently, creating a symbiotic relationship, requiring each polyp to work together and function like an individual animal.

Such an organism looks like an intermediate step between an unicellular organism and a true pluricellular one.

Your question makes me think of honeypot ants: 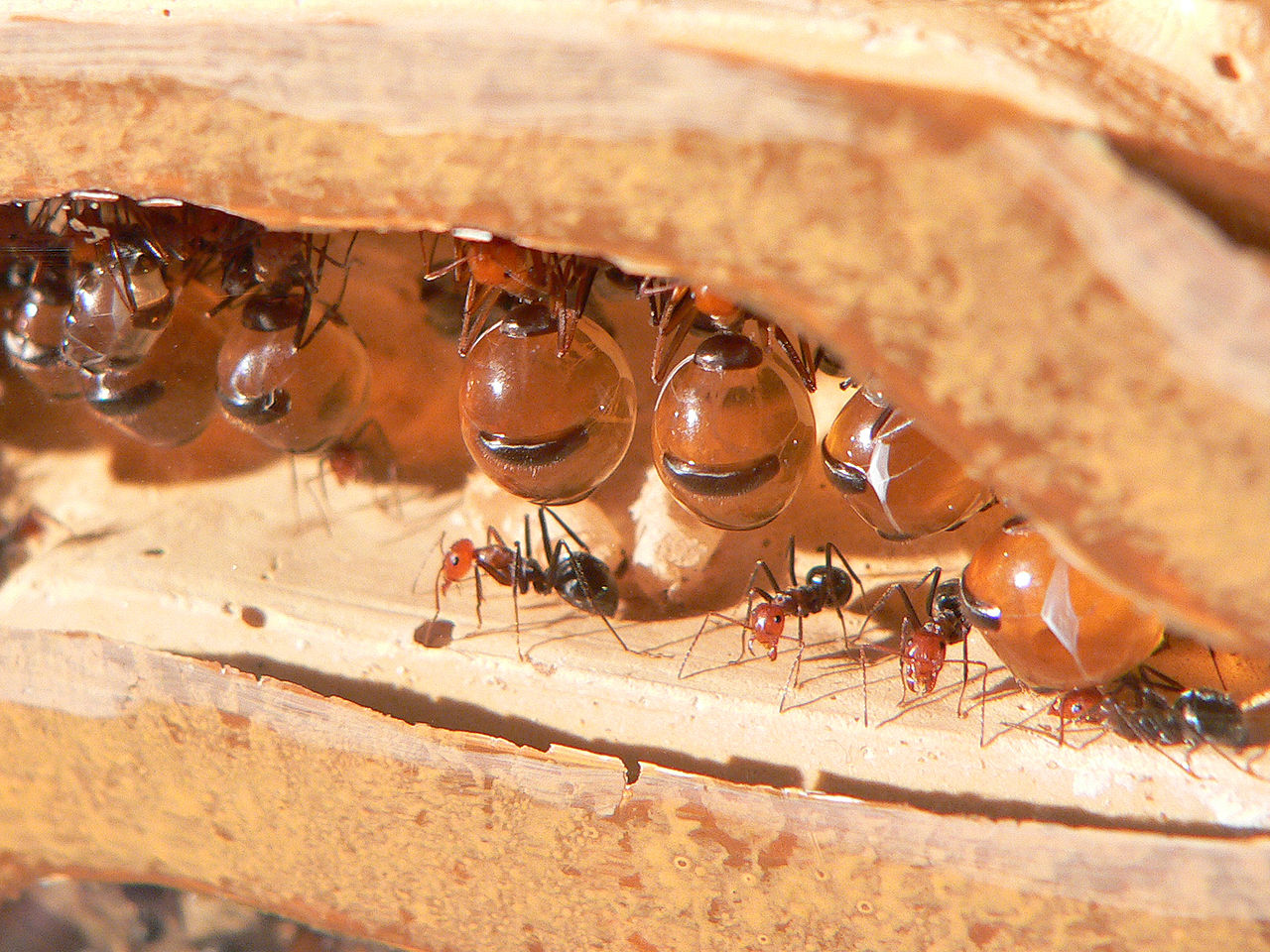 Honeypot ants, also called honey ants, are ants which have specialized workers (repletes, plerergates, or rotunds) that are gorged with food by workers to the point that their abdomens swell enormously. Other ants then extract nourishment from them. They function as living larders.

The queen is a reproducer, the repletes are the digesters, and everyone else is a "hunter" (more likely harvesters in the ants' case).

These ants could evolve to match your criteria, in two main steps. The simplest one is to have more than one ant being born from the same egg. The second may require aeons: ants evolved from non-social insects. They would have to go non-social again, so that a single egg contains all of the individuals.

Both changes may result from evolutionary pressure caused by food scarcity that makes the colony lifestyle less and less effective.

Notice that you will need mobile reproducers to fertilize the non-mobile ones. That, or the hunter may go gather the seed if their reproducer is female.

The actual analogue for this are social insects, where a meta-organism emerges from the collective behavior of the society - different development results in different 'organs' - workers, drones, queen.

EDIT: symbiosis is another direct analogue, though also not a segmented organism, but a dependent relation, of various sharing/benefit/detriment arrangement, between two distinct organisms

There is a quantum of minimal self-organization which the original question exceeds. A viable organism must be able to feed itself. Its gut must be connected to its mouth & anus. Any subdivision into segented parts must in each part also maintain the requisite sensory, cognitive & motile organs. Segmented organisms therefore require a prohibitive amount of redundancy, vulnerability, suffer from an absence of vital organic integration which would necessitate some handwavy substitute far from anything feasible/reasonable.

That being said, I can't imagine a situation where a separate digestor component would be favorable to evolution. The hunter requires too much energy not to have instant access to food and the reproducer would need a constant supply over the long terms of reproduction. The best I could imagine is a "shared stomach" where the hunter travels with it during it's prime and then "sheds" it for the reproducer when the time comes, essentially passing the torch for the next generation.

Any third element to this odd trinity would probably be more useful in some maintenance role such as groom, or nursemaid. This would be similar to existing symbiotic relationships where the smaller critter gets the benefit of food and protection for services rendered.

While we have examples of similar things on earth, the question is what the pressures are to create such a thing at mammalian scale.

My initial thought was symbiosis between three species. The main problem there is that for breeding, you would somehow need all three to breed, even though there's only one reproducer.

But we already know that this can happen. Cells, for example, seem to be a union of two basic elements, probably each originally a separate organism, combining to become cell and nucleus. Butterflies, again, are likely a long-developed version of a parasite/symbiote and an organism that now entirely rebuilds from one form (hunter/digester) to another (reproducer) and passes on the genes of both.

So you COULD feasibly have three symbiotes, each very good at one thing (hunting stuff, converting hunted stuff to energy, and creating/protecting eggs), ending up specializing into those roles. The hunter, eating far simpler food (honey) needs spend less energy and body volume on digestion and reproduction.

The other possibility, as others have mentioned, is specialization of roles within a single species as we see with hive animals, where in bees (simplistically speaking) we have exactly that breakdown: foragers, honey-makers, and the queen breeder.

The problem here is that it's difficult to argue a reason for the honey-maker and the breeder to be separate organisms if you only need one of each. In this case, I'd suggest that there instead be multiple "digesters" - perhaps even sacrificial in purpose, who fatten themselves, die, predigest themselves from the inside as if by spider venom, and are then eaten by the other two.

Reproducer needs to be able to create all three, and which one hatches may depend either on factors before laying (that is, the "type" of egg laid is internally determined by the reproducer, consciously or based on things like quality of diet, etc), or afterwards (the type of hatching is established by pheromones in the air, temperature, actions of whomever touches it, etc). The former gives complete control to the breeder, but in real life we instead find the latter - where eggs can be turned into queens through appropriate treatment by the drones.

What would force an animal to evolve in such a way?

You can make digestion difficult by having the creature digest complicated things. For example, cows digest grass with a system of multiple stomachs. Perhaps the creature stores excess food, which requires immobility. Or the food may take time to digest. The hunters can't wait that long to digest their food, but the digestors can.

Reproduction is difficult if it needs to be done in bursts and produce well developed children. Perhaps reproduction gets done only at a certain time of year, e.g. spring and summer. And in spring, it has to ramp up quickly. The reproducor can't move due to partially grown children (as well as lacking the equipment).

Hunting might stay close to the nest if it is closely tied to a particular kind of vegetation or similar situation. So the hunters can only hunt within that patch of vegetation.

Your "immobile" units can either lose movement capability or they can be moved by adult hunters when young. That would allow the creatures to move, even if only part of the time.

The advantages are that the digestors and reproducors don't have to waste energy moving. They can just do their single task. Meanwhile, the hunters don't have to cart around reproductive and digestive equipment.

The disadvantages are that if one is missing all three types die. They can only live and reproduce as three. A hunter could be in a field of food and starve to death. Similarly, the immobile types are reliant on the hunters to harvest food for them. Assuming food and digestion are available, they still need the reproducors to provide the next generation.

34
Why would the mouth of a creature evolve to be away from the head?
6
Species and Race diversity and names
20
The Centaur--Let's Get Real, Shall We?
11
How can my creature keep sand out of its mouth?
6
what the aquatic creature need in order to live or survive in my acid water?
6
Can the dunkleosteus jaw model work on a land predator?
4
How Feasible is a Flying Equivalent of my Chomping Eggs
4
Where can the brain be arranged inside the torso?
21
Why would a supermassive sarlacc-like creature let captured prey wander around inside itself?