A side shot from my series on a computer-less future; see here, here, and here.

Project Rho defines a torch-drive as an engine with both high acceleration and high exhaust velocity. A torch-ship is a ship with a torch-drive and a specific power of 1 MW per kilogram or larger. The linked page has discussion of various types of torch-drives and others are available on Wikipedia.

Some torch-drive technologies (there are many more that meet the criteria):

Which torch-drive technology could be implemented in the near-future with the least complex (here defined as cost of design and production) control systems?

Of the other propulsion methods, these two seem to be the least complex. The other methods require control systems that dive into the operation of the reactor itself, in some cases to an almost intimate and impossible level (for the constraints).

For a fission-fragment rocket, one would want to monitor the quantity of neutrons being released by the fissionable materials consistently and without much error, else they risk an overreaction of neutron bombardment—a meltdown. These kinds of torches also require some electromagnetic channeling, which itself warrants a subsystem of monitors and controls. Should this fail, you may risk damaging the exhaust nozzle of the rocket and perhaps other things. There are also other constraints of the device's operations one would want to consider monitoring and controlling, such as the temperature of the ionized particles (you're working in the range of potentially tens of thousands of degrees Kelvin, a few thousand, minimum), and the various integrities of the components of the device; if its a rotating reactor, then you have moving parts and specific alignments to worry about.

Gas core rockets have the advantage that they can gain much higher temperatures, thus higher specific impulse. With great power comes great responsibility. A control system for this torch would need to monitor the temperatures of the core's nozzle and containment, which are the structural crutches of the design (for their temperature limitations). One would want to monitor the structural integrity of the containment and control a neutron moderator to increase or decrease the frequency of reactions. This design also requires an effective cooling mechanism, either through external radiators or gaseous/liquid coolant passing through the nozzle. For the sake of maintaining structural integrity or maximizing/minimizing specific-impulse, one would want to control the rate at which this mechanism dissipates heat. In addition to that, it is thought that there needs to be an internal absorption of thermal radiation as well, to control the rate of reactions. Tungsten particles would seem to be the popular choice, and the rate at which these particles are pushed through the reactor would need to be controlled for similar reasons as the cooling mechanism, to delay the degeneration of the device's components.

A fusion rocket has the benefit that it cannot meltdown. Much of the concept of a fusion torch is theoretical. There seems to be two predominant types: inertial and magnetic containment.

Nuclear salt-water rockets look promising. The amount of fuel you feed one of these and the degree of temperature it gets to are almost of no concern. One manner of control would be the fuel-feeding system. The particles constituting the nuclear fuel are said not to diffuse all at the same, or even at a regular, velocity. They occupy a broad range of many orders of magnitude, and so it is possible that free-moving particles of the fuel may backtrack into the fuel-feeding system, potentially damaging or destroying the system. Of course, you'd want to have control of the fuel injection rate anyway, to adjust acceleration and whatnot, but this is another reason to have that control. If a detector detects a large enough quantity of the fuel being accelerated back into the system by its own diffusion rate, then you may want to close the system for a short time and let the disturbance pass. This seems to be the only control surface for this device.

Nuclear pulse propulsion has been experimented with in the past (see Project Orion) and is fairly well-understood. What you are essentially doing is dropping small (or large, if you're looking for a good time) nuclear explosives behind your ship and detonating them at a distance where it is both "safe" and the explosion will impart a good fraction of its momentum onto your craft. You'd need a control to drop the bombs and a control to detonate the bombs. The intermittent stuff is up to your analog computers to figure out. Dropping should be simple. While your craft is experiencing imparted momentum from the previous blast, release another bomb so that your vessel accelerates away from it. My personal recommendation is that you don't put the actual timer (detonation control) on the bomb itself. Let the bomb be activated by some external force, like a focused laser beam vaporizing some part of its surface, a "fuse," or a hypervelocity projectile smacking into it, fired from the ship, a gun perhaps. Why? Safety reasons, of course. Not because it'd be cool to shoot at nuclear bombs all day.

The Orion Nuclear Pulse Drive is the closest candidate. With the exception of the timing mechanism to fire the nuclear pulse units, you could actually have everything else done by straight mechanical drive. The mechanism to load the pulse units was based on a vending machine, and the cannon to fire the pulse units behind the ship was essentially a giant air cannon. Mechanical timers can run most of the devices, and timing of the shots could be moderated by a cam system in the shock absorbers to trigger the timing cycle.

It is perhaps the ultimate dieselpunk sort of technology imaginable, and if the General Atomic crew had been given their funding, they could have gone to Mars by the end of the 1960's, and Saturn by 1975 according to their timetble

Least complex: all by hand. 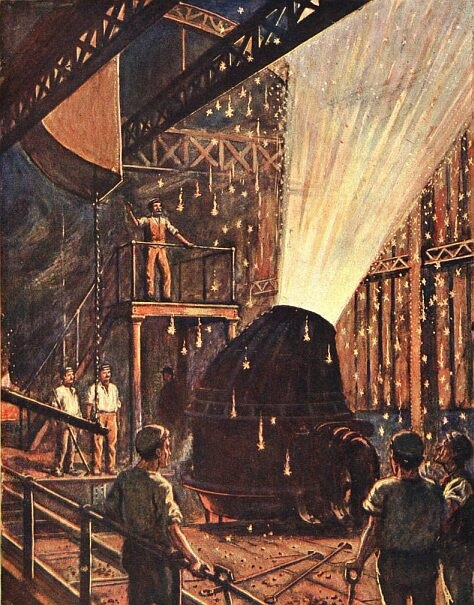 If you want retro, go full retro. Chains, pulleys and main strength. Your model will be a mid 1800s iron foundry. Instead of that (alarming-looking) crucible you have a self-sustaining fusion reaction lifted from H.G. Wells The World Set FreeYour crew points their various rockets in the direction called for by the captain, quenching or firing up the reactions as warranted. It will take several straining shirtless men to turn off one of the rocket tubes - which is how you get the thing to turn.

Plotting orbital maneuvers is a different kettle of fish and will require a lot more computational power unless it's being done "by guess and by God" using marque one eyeball, maybe a sextant, and hands on manual steering, which it could be. Even a fully digital system needn't be much more complex than that used by the Saturn Vs and your smartphone has orders of magnitude more computing prowess.

16
A clock for interplanetary travel
31
Can you design your own plants without a computer?
11
How high-def can my TV be without computers?
4
How to modify DNA without using computers?

42
How can a space station prevent docked ships from irradiating each other or the station?
28
How can spacecraft manufactured on the moon be powered?
5
Containing the radiation of a nuclear powered aeroplane
22
What are plausible faster than light methods for a far advanced civilization that aren't a warp drive
9
Why would NSWR's be used when Orion drives are around?
7
Estimating thrust and kg fuel for a generation ship's journey to Alpha Centauri
8
What is the most advanced form of torch?
7
Is speed of a ship limited by its propellers or the engine