How can a shapeshifted jaguar perform a blood transfusion on a dying person? [closed]

(I am not a doctor, nor do I play one on TV. My assumptions below are based on reading Wikipedia, so they are very likely to be incorrect. ;) Any corrections are welcome.)

So there's this woman who has been injured and is bleeding out. Our Hero is with her, but there is no one else around to help. After putting pressure on the wound, he wants to give blood to her to stabilize her or at least buy her enough time to get real help.

The catch is that he's currently in the form of a jaguar, and cannot change back to a human in time. He has all his normal human intelligence, but he has paws instead of hands and he doesn't exactly have any IV tubing with him, anyway.

The overall plot point is to get jaguar blood into the woman's system, something that I can't imagine occurring outside of some very dire circumstance like the above. But if you can imagine another scenario, that's welcome too!

EDIT: Does it change anyone's opinion if the woman is herself a doctor (low-tech, "typical" fantasy environment), with supplies, say? Could she recognize that her bleeding was going to get serious soon, so before that, she started the transfusion herself? The first transfusions were in the 1600's; what equipment did they use then?

For all the reasons that MontyWild presented, I don't think the jaquar can actually perform the transfusion. RBarryYoung's idea in the comments on the OP is practical, but all of MontyWild's challenges apply, even with human hands and human dexterity. I wouldn't want to attempt a transfusion with a ball point pen. Would you?

Reducing your scenario to its barest facts, you are trying to get the jaquar's blood into the woman, presumably with the intention of infecting her with feline-lycanthopy. Why doesn't he just tear his paw with his teeth and then press his new wound to either her mouth or her wounds? I know that that makes his act of infecting her deliberate and I sense that you would prefer that it be an accident; still it gets your characters from where they are to where you want them to be.

Alternatively, the cat could just lick the woman's wounds in an attempt to clean them, or just to comfort it's dying mate. This would be in-character for a big cat so it might be more instinctual than rational; again it would get some of jaquar dna into the woman's blood stream.

That's actually pretty hard to do without some sort of tubing small enough to insert into a vein, let alone by someone who currently has lousy digital dexterity. Even if the were-jaguar had an IV tube, with those paws, he wouldn't be doing any transfusions, and without IV equipment, or only improvised equipment, there's almost no way.

If you had, say, the empty part of the ink tube from a pen, you might be able to do it, but with a tube that size, using only normal blood pressure, it might take a while to transfer enough blood from the donor's arteries to the recipient's veins, but that presupposes that the were-jaguar has enough dexterity to pull the job off, which I doubt.

Puncturing an artery and using blood pressure to force the donor's arterial blood into the recipient's veins using simple physical contact might sound like a practical solution, but it is likely that most of the donor's blood will end up on the ground, as blood is slippery, lining up two cuts is difficult, and the pressure required to hold the edges of the cuts together would collapse the already exsanguinated recipient's veins.

I have to agree with the others on this one.

I wen't through EMT training when I was in high school and we had to practice inserting IV's on each other...I still have scars.

Even with a bit of training and human manual dexterity, inserting an IV with the proper equipment is not a simple thing. If you compound that problem with no equipment and feline manual dexterity...the short version...completely impossible.

I'm with most others on this one, and would not write up a Transfusion attempt.

If your goal is indeed ultimately to have some of the jaguar blood end up in the woman, I would suggest a scenario where both are wounded.

The woman can still be in a critical state, but the jaguar is also wounded. He tried as best he can (dexterity eh) to pull her onto himself to transport her as fast as possible where she can get help. In doing so she may come in prolonged contact with an open wound he's suffered. Makes his efforts to save her all the more dramatic and the mixing of the blood and whatever it causes all the more concerning. (Its an accident/ it wasnt noticed/ he should have noticed/ hes at fault/ etc...)

The time to shape-shift probably is related to the amount of stuff to be done, both overall quantity and the extent of the difference for a given element. Bones are the most difficult and some of them change their size substantially: the vertebrate skeleton is the same for all, just stretching and shrinking individual bones, especially so if sticking to mammals.

To work in a pinch (pun intended) he just needs thumbs. In fact, it might be handy enough (pun intended) to keep a modification to pure feline form normally, to do little things like open doors and take notes without having to change back. 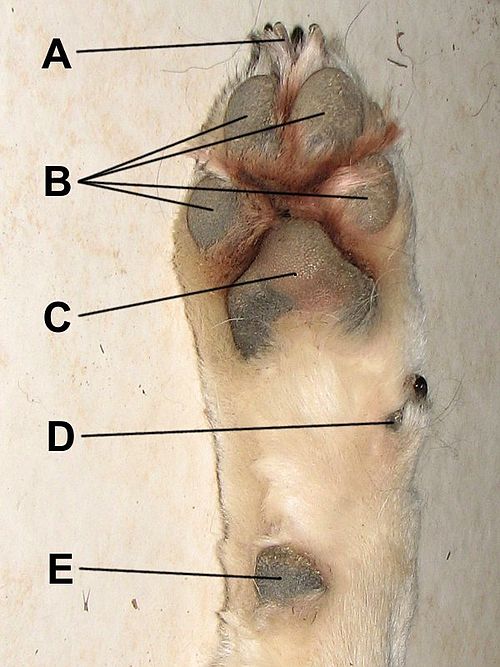 You might find how to draw very interesting too from Wikipedia 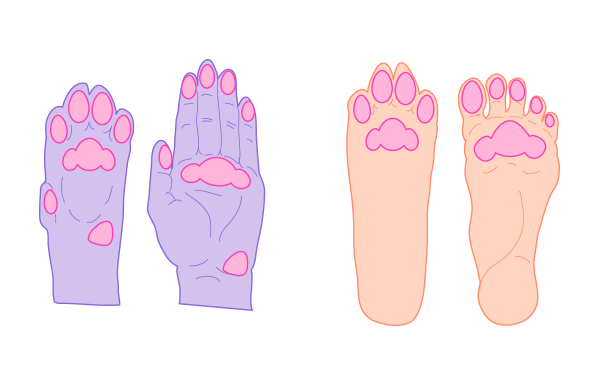 Without trying to work out and build a complete working model, you could say that the dewclaw digit is elongated and the (retractable!) Claw shaped like a tweezers tip rather than a hook; and the pisiform (E in illustration) is also extended and the end shaped as a teardrop, offering a broad anvil plus a fine tip, either of which can be used in opposition with the tweezer limb based on the claw extension mechanism for the large open/close movement, plus a little bit of movement in the finger proper to adjust the position. The tear-drop shape is wavy, offering a notch as well, with idea of being able to grasp a pen or some-such using that feature.

Without compromising his ability to use the fore paws like a Jaguar would, he can hold a pen and pick up small objects like coins. For anything more, the paw could transform much quicker than the whole body! It would offer continuous improvement to dexterity over the few minutes it takes, and his practiced trick is aimed at making the best effects from the smallest (fastest, energetically cheapest) modifications, changing the bones only slightly, curving rather than changing the length of the bones (that is the hard part), and gain dexterity at the sacrifice of leaping/clawing/running ability.

So, when faced with the need for hands, he naturally starts a well-rehearsed shift to improve his hands. Maybe opening the medikit case is a problem, being too large of a grip to work the latches; so he uses alternative means to open it; then going through the contents is no sweat, but opening the envelope packaging is like trying to open a ketchup packet with heavy gloves on and using a chopstick, so stomp on it to hold it down and claw it open instead. Grasping the tubing and needle is no problem at all, and by then his hands are becoming more useful.

Though useful in a limited sense, the sum total of manipulation abilities, strength, scale, grip etc. is all wrong so the task is awkward in interesting ways.

But, he can effect custom changes for the task at hand; changing the way a joint faces or the shape of the end of the bone without making what are actually large changes in the size of bones or anatomical features such as joint structures and tendons.

For interest, work in ways of accomplishing things that don't use his hands: maybe turning lips into knobby graspers is much faster than changing bone, and can be something kept on since it doesn't affect his feline powers (might even be an improvement without any downside).

The tail could also be used to grasp large things.

Why are you assuming there's nobody else to help? I think it will be much easier if you have a situation where you have three people, the victim, the were-jaguar and a doctor. Transport is available, it doesn't matter if the were-jaguar is weakened with blood loss. It does matter if the doctor is thus weakened, though. Thus the jaguar can give more blood than the doctor could.

Third Person doctor/helper is a non-biological Person (Robot), or a sapient non-mammal, or a human with a very serious blood bourne infection, or some blood toxicity Thing. All very good reasons not to use their own blood

The jaguar should try and be frustrated by his inability to find a vein and do the IV.

The dying woman (a pediatrician) tells him that they used to give fluids intraosseously when they could not get a vein on the kids (true; check wikipedia).

The jaguar does a "cut-down", opening a bone with his teeth and plugging the needle with the fluids into the exposed marrow space. One thing a jaguar does have are teeth capable of opening a bone. This is gory and visceral but would work. She gets infected with a bite, not his blood; hopefully that does not matter.

Oh - he needs the IV fluids but if he has the IV equipment he probably has a bag or 2 of saline. Maybe a rapid infuser pump too. This scheme sidesteps antigenic issues with animal blood too.

Not the answer you're looking for? Browse other questions tagged science-based internal-consistency biology fauna medicine .

41
What effects would a change in the nature of human sexuality have on society and infrastructure
6
Can telekinesis be used to stop someone from bleeding to death?
10
Bouncing Beads of Blood - Just how cold would it have to be?
29
Would dual wielding daggers be a viable choice for a covert bodyguard?
2
Superhuman: Extreme Temperatures Pt.2
7
Applying this kind of physical magic to walk on air
7
Could interspecies blood transfusion from organisms of various sizes occur?