How many horses would be required to pull a modern Caravan

I'm currently investigating a post-apocalyptic novel and wished to know if Horses could be used to pull a modern Caravan and if so how many. Furthermore what would the potential daily range of such a setup be?

At present I'm basing my assumption of a horse equivalent to Shire Horses (with a few additions that wouldn't affect strength but would ensure Riders couldn't overburden them.

By and large my issues stem from a lack of understanding regarding horse stamina and endurance - something I'm attempting to correct. I had been hoping to find individuals with additional information to cement my figures and estimates.

The roads in question would either be decayed tarmac roads or dirt roads depending on the location.

This would indicate that a couple of Shire Horses could tow the caravan at least as fast as a Conestoga.

On the other hand, I'd guess that faster horses could tow it at least as fast as a stagecoach, 8 mph.

You haven't said how big the modern caravans are. Traditionally horses were used to draw gypsy caravans over long distances and over rough roads. I can't see any problem with a suitably adapted modern small caravan. See picture 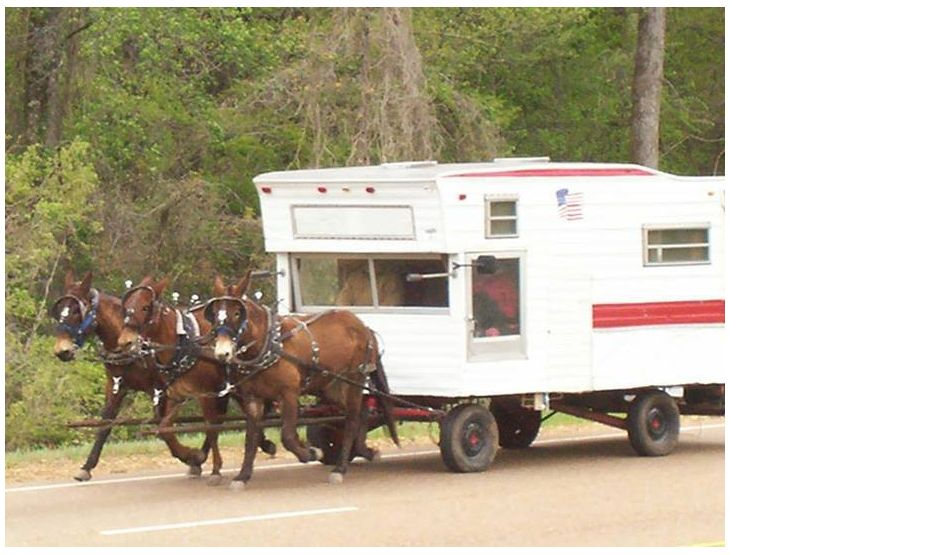 Some have commented that small pneumatic wheels wouldn't work on non-tarmac surfaces. I refer them to this video. https://youtu.be/I9BwEO3_uIQ?t=7

This cart would go where most motorised vehicles would get stuck.

It depends how far past the apocalypse are you?

Tyres have a finite life. On rough or even slightly rough terrain larger wheels are better than small ones by a huge margin. Caravans are really only suitable on roads. Also you get caravans with 2 wheels and others with four. Most I have seen have just 2. The difference between your horses carrying some of the caravans weight as compared to it bearing it's own weight would be huge even on modest inclines.

All in all a caravan is suboptimal compared to a cart specifically made for it. Modified by extending the axles to allow for large wheels is your best option in which case there would be no difference in horsepower needed than a cart.

A carriage would be superior in all other ways. A caravans suspension, weight distribution and everything else are designed for good roads. If you've ever hit an unexpected bump or pothole with a caravan even at low speed you'll understand. Bottoming out with your unmodified low caravan would be a constant hazard.

It's a good idea though if you modify the caravan to suit. My suggestion would be to remove all the suspension and running gear and replace it with that from the back of a light truck with high clearance. The suspension then would be much more suitable since it's designed for a higher weight and the high clearance and bigger tyres would make even more difference. Not as good as a carriage suspension wise, but a solid practical solution. No specialised engineering needed for the modification. The hardest bit would be designing and fabricating the harnesses, which you have to do anyway.

Assuming your engineer has a bit of imagination you can run a generator off the differential or a wheel trickle feeding a battery bank and have all the comforts of home and lighting for night travel, spotlights for hunting or defence purposes etc. Link a trailer to the back of the caravan and you take the weight off the horses (the trailer will pull the back of the caravan down like a counterbalance), have storage room for a battery bank and other things and would probably just need an extra horse if you load it heavily. It would be much more stable like that, essentially you'd have 4 wheels with a pivot point in the middle. Your engineer would tweak all these things to work best for your situation.

I would think you could get 3 mph out of two horses on level good terrain with ease with the setup I described. Which is pretty much perfect since it's around the same for a human. Have another couple of horses for gradients and things or replacements and you should be good to go travelling. Steep gradients and rough terrain could be passed by separating the caravan and trailer and moving them separately and adding your riding horses.

Image result for weight of a Conestoga wagon A typical prairie schooner weighed about 1,300 pounds (590 kg) when empty, and the general goal was to keep the weight of the added cargo to no more than 2,000 pounds (900 kg). Teams of 10 to 12 horses or mules or six yoked oxen typically were used to pull one of these wagons, with mules and oxen generally preferred.

1 find a car and trailer pair that suits your purpose, ie large SUV and trailer of weight that you can look up on the web. 2 Translate the KW rating of the towing vehicles engine into horse power.

Not the answer you're looking for? Browse other questions tagged apocalypse horses or ask your own question.

8
How many deaths can be caused by a Coronal Mass Ejection (Solar Flare)?
40
How many people are required for a healthy re-population of the Earth (Post-Apocalypse)?
3
What would happen to landfills if abandoned for many years?
1
How many people can can a self sufficient city, protected by a magical barrier, fit per square mile?
12
What would happen to a modern skyscraper if it rains micro blackholes?
3
Modifying horses to be able to digest a broader variety of plant material. How?