Would it ever be possible for humans to adapt to Jupiter's gravity?

If humans could travel to Jupiter, what ways would we have to adapt to the high levels of gravity?

Would your blood flow to your legs and kill you from lack of oxygen in the brain? Would you get flattened from the gravity?

How would humans adapt to the gravity?

If humans could travel to Jupiter...

You mean inside the atmosphere?

Unfortunately, since Jupiter's atmosphere is made of the lightest gases, it is practically impossible to get a balloon to float there. The combination of gravity and pressure also means that we simply do not know how to make a plane that would be able to fly in there indefinetely. To fly there for even a few seconds would involve aerobraking a flyby, which is suicidal.

Let's suppose this is handwaved away, and that you'll use a pressurized habitat. Jupiter's surface gravity is 24.79m/s2, roughly 2.5x that of Earth's. Notice that Jupiter has no surface - that is just the gravity where atmospheric pressure equals that of Earth at sea level.

If you search sites like Wikipedia, you'll find that many sources cite untrained people can sustain forces of up to 4 to 6g before passing out, which is more than Jupiter's surface gravity. However, any sharp turn of your jovian vessel could knock you unconscious. Adaptations to prevent this would include stronger musculature and heart, and a brain more resistant to strokes.

I don't have much data about long term exposure to high gravity, but we did some speculation on this other question of mine:

Technological adaptations for colonization of a higher gravity world

Jupiter has 2.53G surface gravity not a problem in short term for trained and healthy individual. Point of note it is a gas giant you would need to live in orbit or some more advanced and sturdy station in it's atmospere. If you are in orbit around Jupiter you would face same problems as ISS. If you plan to build floating station, there is a lot to consider from size to where to put it. In general, it needs to be durable, corrosion resistant and mobile to evade less accomadating weather. But here you would meet gravity. Everything is x 2.5 times as heavy your blood included. You would want to be trained and with small stature, use mechanical aid for loads and transport, medication support, consider genetic modifications and mechanical ones.

As others have said, Jupiter has no surface so you will never “land” on Jupiter or construct a building. But this is good news for you! This means that if you are living in Jupiter’s gravity, you are in an airship of some kind. And in that case, you can just pick whatever altitude you want to live at. There is a sweet spot in the atmosphere where Jupiter’s gravity is equal to earth gravity, and you can just hover your sky ship at that altitude and walk like normal.

I’m not sure what altitude that is, but every planet larger than earth has one.

We won’t talk about the winds, however. That’s another beast entirely!

Expanding on my comment on Renan's fine answer, as I think there is more to that story...

many sources cite untrained people can sustain forces of up to 4 to 6g before passing out, which is more than Jupiter's surface gravity

It should be noted the "4 to 6g before passing out" is specifically for an acceleration in the direction from your head to your feet. Different angles produce different results. That many Gs in the opposite direction, such as if you were to do a handstand at that same location, would result in blood vessels bursting in your eyes and eventually blindness.

That many Gs in a perpendicular direction, from your front to your back, would be much more tolerable and we can sustain way more Gs in that direction. This is the direction that we experience g-forces when we accelerate in a car.

Perhaps we could adapt to the high-G forces by simply lying down all the time. We could crawl around on our backs. Or perhaps we would generally be lying on something modeled after a street luge board. 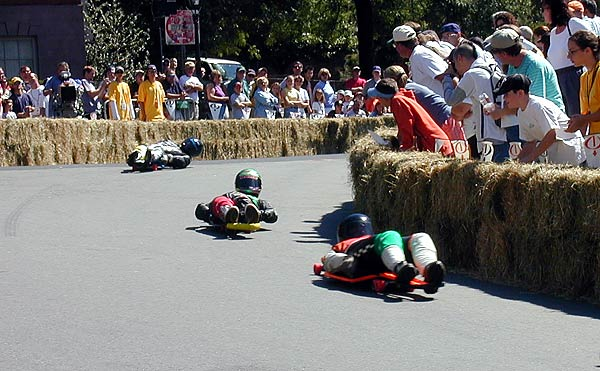 We would probably build something like that and put small motors on them.

We could cruise around our Jupiter-station on something like that, and keep all objects we want to pick up and manipulate very low close to the floor.

Rooms would be very short with ceilings being only 3 feet (1 meter) from the floor. Computer monitors would be attached to the ceiling so that you could see them easily while in the lying position.

Keyboards would be wireless and installed into the board next to you so that you could use them in the position where your arms naturally rest, and they would also be used to control the luge-like board.

Adapting like this would allow us to tolerate that many Gs for a much more extended time than using our usual standing and walking posture.

From this medicaldaily article I found the following...

It's difficult to calculate the exact level of G-force that would kill a human, because the duration of exposure is such an important factor. There are isolated incidents of humans surviving abnormally high G-forces, most notably the Air Force officer John Stapp, who demonstrated a human can withstand 46.2 G's. The experiment only went on a few seconds, but for an instant, his body had weighed over 7,700 pounds, according to NOVA.

As they correctly noted, the duration of exposure is significant. I notice the same record is in the Wikipedia page for G-force and it does specify that John Stapp's experiment was horizontal acceleration, not vertical. The Wikipedia page also notes that some others have survived even higher G-forces, but again this is all very short duration.

There is another Stack Exchange question asking about long duration G-force exposure, and a useful answer here. It suggests there is not enough research in this area which is what I expected, but it looks like the best supporting experimental evidence found by that answer was a continuous high-G environment that lasted at most 7 days at 1.5 G, after which no immediate ill effects were found. There are multiple citations in that answer which you could use to dig further.

Also note that the health problems of simply lying down almost all day every day permanently are an issue regardless of the high Gs and can affect us even on Earth at 1 G.

We might not have enough research to demonstrate that 4-6 Gs is survivable for long durations, but we do have research suggesting that 1.5 Gs for a week might cause no problems. If we also accept that 1) since we don't have known experiments of higher G-forces or longer exposures, we can unsafely assume that you could probably push that a bit stronger and longer before seeing ill effects, and 2) that you can probably condition and train people to withstand more Gs or for longer duration, then we are getting close to the conditions of Renan's suggested elevation at 4-6 Gs.

And if you take the 2.5G Jupiter G-force suggestion in the answer by Artemijs, that only makes this even more possible and for even longer, possibly months or years.

So if you take my adaptation suggestions, you could probably do your Jupiter mission at Renan's elevation for at least some number of days or weeks, and if we are underestimating human resiliency then maybe even longer.

And we get to race street luge boards around a space station!

Not the answer you're looking for? Browse other questions tagged science-based gravity or ask your own question.

32
Is it possible to orbit inside a gas giant?
11
Technological adaptations for colonization of a higher gravity world

5
What would be the short-term and long-term effects of an increase in the strength of gravity on humans?
8
When does gravity become too much for humanoids?
2
Would humanoids from high gravity planets be smaller than us?
6
Gravity Difference and its Impact on Humans
8
What effect would 1.5 times the gravity have on a human?
7
How would air pressure gradients be affected by controlled gravity?
5
How strong would John Carter really be on Mars?
1
Adapting organs, How would they adapt?