How can testes be housed in the body without damaging sperm?

The testicle or testis is the male reproductive gland in all animals, including you humans. It is homologous to the female ovary. The functions of the testes are to produce both sperm and androgens, primarily testosterone. Approximately 300 million sperm cells are produced daily, with millions made every minute. Your testicles are housed outside the body, and are therefore very vulnerable to extrmeties, as well as being subjected to being kicked. While hilarious, it does not lead to successfully conducive reproductive capabilities.

I would like to create my own humanoid species without this design flaw, but modeled off of your species, and have the testes inside the body rather than out. However, there is a problem. Too much heat is deadly to sperm. The body's temperature would kill the millions of sperm being produced, effectively making males sterile.

Humans already have the ability (though unconscious mostly) to extend and retract their testicles. So just increase this ability so you can retract all the way inside yourself, and they only descend when aroused, therefore they start producing sperm at that time. You could add some sort of sphincter muscle that closes behind them and protects them when stressed so it's still an automated biological response. Technically you would not be damaging the sperm because they simply aren't being created while the testicles are being stored.

Mating rituals would be modified to last an hour or so to allow a large enough number of sperm to be created before they are needed.

However, there is a problem. Too much heat is deadly to sperm. The body's temperature would kill the millions of sperm being produced, effectively making males sterile.

By doing what nature does with species that have internal testes but need to keep the sperm from dying of excess heat.

Just do what marine mammals do: keep them well inside the body!

This article describes some ancient research that revealed that cetaceans keep their testes cool by a curious arrangement of blood vessels in that region. Basically, your humans could do the same: develop a network of blood vessels designed to locally regulate the temperature of the tissues surrounding the testes.

For your reading pleasure: Temperature regulation of the testes of the bottlenose dolphin (Tursiops truncatus): evidence from colonic temperatures

Dolphins possess a countercurrent heat exchanger that functions to cool their intra-abdominal testes. Spermatic arteries in the posterior abdomen are juxtaposed to veins returning cooled blood from the surfaces of the dorsal fin and flukes

Yes, there are diagrams.

Your post is based on the assumption that testes evolved to keep sperm cool. There is actually no evidence for this. It could well be the opposite, that sperm evolved to like it cooler because it's in the testes.

Given how much of a vulnerability testes (not just the final form, also how they develop) are, it seems much more economical to evolve sperm with higher heat resistance. Elephants and birds, for instance, have a high body temperature and no respective cooling mechanism.

Testes evolved independently in marsupials and placentals, so they seem to be solving an important problem. But if that problem was temperature, then birds and elephants should have them, too.

TLDR: The cooling problem is easily solved, but we don't really know why humanoids (in particular) need testes, so your species might suffer from other problems.

For a humanoid species (that is, bipedal but not related to homo sapiens) you really don't have to worry. You can just make testicles internal. We have no good idea why Earth mammals commonly, but not always, have external testes. Therefore we have to reason to generalise and expect external testicles in all bipedal body plans.

The heat hypothesis is popular in pop-sci articles but has no useful evidence nor mechanisms to explain its evolution. For starters: mammals begin 220 million years ago and the scrotum evolves twice in lineages about 70 and 100 million years later, so we have many millions of years of hot, internal testicles to explain.

For my money, the better bet is that testicles are damaged by the fluctuating abdominal pressures of running and galloping mammals (usefully aligns with current populations of scrotum/not-scrotum mammals and the rough evolution of these gaits).

Therefore you can explain that this species didn't evolve such fragile reproductive organs, or that they are located in a protective casing of some sort.

Yes, yes, whales, dolphins; just so. Cool blood - very sensible. But air is cooler than blood.
I propose the testes be located where they can be cooled by that cool cool air. 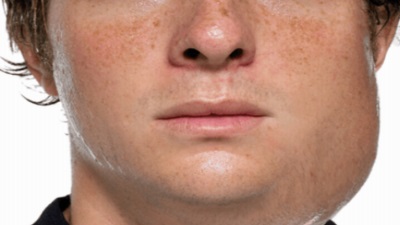 This local is optimally suited to provide varying flows of cooling air. Mouthbreathing can facilitate cooling of the testicles under conditions of heat; conversely nosebreathing in cold weather will keep the testicles warmer.

Relocation of the sperm producing organs to this site would also mean that the male penis (also prone to damage in an exposed area) would not be necessary, and urinary apparatus could be relocated back into the safety of the bony pelvis - along the lines of the much more sensible human female body plan.

4
Could you “create” a fertilized human foetus without sperm?
4
Can I program nanobots to behave like sperm and fool an egg?
62
How can waste from the body be removed without being expelled from the anus?
7
How can a demonic viral infection spread throughout the body without being noticed?
2
Alien vixen on the hunt for sperm donor rewards