Converting Neptune into a diamond planet

This question was inspired by this one, questioning the methods one may use to attach structures to the surface of a diamond world. The idea of a celestial body largely composed of crystal diamond seems to be utterly preposterous, inconceivable, and just plain wrong.

With the known composition of Neptune, at the pressures and temperatures expected in Neptune's inner structure, it is suggested that methane decomposes into diamond crystals which rain down into an ocean of liquid carbon, perhaps forming floating masses of crystal diamond, 'diamondbergs'.

My question is: Given what we know about Neptune's internal structure, could the outer layers of Neptune's atmosphere be stripped away, perhaps over the course of 4 billion years via solar wind erosion, in such a way as to leave behind a crystal diamond saturated body?

Please disregard the fact that no sun of ours is about to strip away likely over 16 Earth masses worth of Neptune in the next 4 billion years. Assume a Neptune-like planet about a star which will do the job in 4 billion years.

My thinking is that even though the diamondbergs and diamond seas are under high temperature and pressure, when the outer layers are removed and the temperature and pressure are decreased, the diamond may solidify and crystallize. 4 billion years is entirely arbitrary, if it can be done quicker, or if it must be done slower, let it be so. Bonus points if one finds another way to turn a Neptune-like world into a diamond planet.

In my mind, the most likely reason that you would not be able to form a diamond planet would be if the diamond formation happened in a region of the planet where it would not be able to coalesce into a solid surface. That is, if diamond conversion happened in a region where there was admixed non-methane ices, then the diamonds would be in a suspension or colloid in a volatile layer where, if your increasing-luminosity-sun hypothesis were to play our, the evaporating 'solvent' would carry away the diamonds.

Neptune's mantle is primarily made up of water, ammonia, and methane gasses. According to Bendetti, et al., 1999 (summary here), the experimentally determined conditions that will allow diamond formation from methane are 2000-3000 K and 10-50 GPa pressures. The question is: what will the rest of the water, ammonia, and methane gasses be doing at those temperatures and pressures? 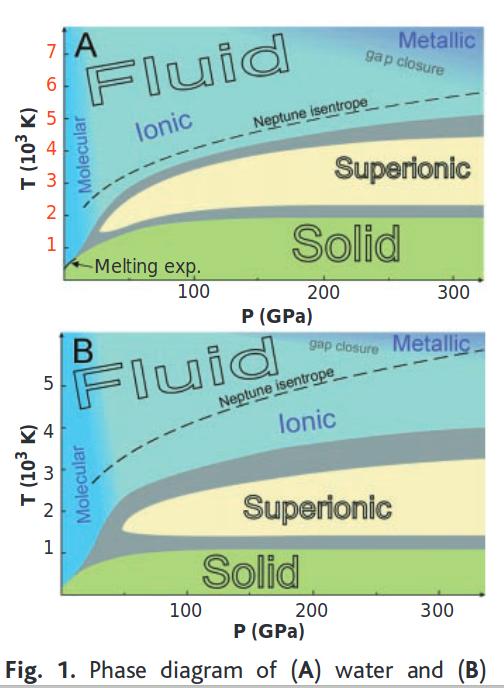 Water and ammonia are both discussed in a Science report by Cavazzoni et al. The predicted conditions inside Neptune for the water-ammonia mix in the mantle implies that the water ammonia mix will be a molecular or ionic fluid, and will not solidify.

The other issue is with methane, or more specifically the byproducts of the methane breakdown. When diamond forms out of methane, there is obviously some hydrogen atoms that need to be accounted for.

According to the first paper, what first happens in the 10-50 GPa range is that methane 'fuses' into complex hydrocarbon polymers. For example, a reaction might be

Reactions like this proceed until enough of the complex hydrocarbon polymers start to lose their carbon completely, and form diamond crystals. This means that the released methane byproduct is going to be completely hydrogen.

The available evidence that I have found for methane suggests that at the given pressures and temperatures, it will be a supercritical fluid. For hydrogen, metallic hydrogen forms above the 500-1500 GPa range. While Jupiter and Saturn reach this pressure, Neptune does not. So both the methane and hydrogen should be supercritical fluids at the conditions that diamonds form in Neptune.

Unfortunately, I could not get any density estimates for either methane or hydrogen. However, both these fluids are generally less dense than either ammonia or water at any temperature and pressure conditions I could find.

The primary ingredients of Neptune's mantle should all be liquid. Furthermore, they should all have a lower density than that of a diamond at STP (~3500 kg/m$^3$).

Therefore, I consider it plausible that diamonds forming in Neptune's mantle would crystallize into a suspension. As the suspended particles got big enough over time, they would fall to the rocky core of the planet, coating it will a diamond surface. Up to 15% of Neptune's mass may be methane, so this diamond surface could be very large, as massive as the Earth, and possibly larger in diameter due to its lower density.

If Neptune's atmosphere and upper layers were stripped away by a more luminous sun, then it is plausible that a diamond surface would be exposed. However, I will say that with the outer layers, some 80-90% of the planet's mass, removed, the solid core around which the diamonds formed would undoubtedly expand. This expansion would probably shatter the diamond, which would no longer be under enough pressure to reform. So, if the diamond planet were true, it would be a shattered diamond wasteland, instead of a smooth crystal planet.

4
Civilization on a diamond exoplanet?

11
Could a Neptune like Gas Giant support life?
16
Ways to make contact with aliens on a much larger size scale?
15
Defeating the revised Snakebot of Doom
1
Reducing human military capability
11
How would a world with drifting land-masses be mapped/charted for navigation?
6
How do I get naturally occuring diamonds/precious stones in cheese?
19
Is it possible to place a permanent probe on Uranus?
3
How can I turn diamond into graphene?
6
The Earth and Moon resolidify under a bluer star, their outer layers evaporated and burned away. What do they look like now?
6
Converting deserts into more hospitable places by inducing rain through the ocean?