How to break down consciousness/soul from an alchemical perspective

I am trying to describe consciousness from a magic elementalist perspective. I've dug through a ridiculous amount of pages of occult alchemical lore without success. My goal is to learn if students and/or practitioners described the human soul/consciousness with respect to elemental energies.

My world has many tie-ins to the occult and alchemical genres, and so I am trying to define the soul with respect to them. My question is: in the logic of alchemical practice, what reasonably associates/describes human decision making concepts with elemental attributes?

Clarification: I am looking for some existing thought(references) that attempts to roadmap this out.

Alchemy is a soteriological practice, a means by which we attain salvation. Decision making is centered around the alchemical logic of elemental energies that are conducive or not conducive to achieving union with one's full potential; through transmutation of the soul to a higher paradigm of consciousness into a new mode of being wherein you mesh with the deeper, humbling and all-pervading true alchemical "gold".

The alchemical element most strongly associated with consciousness, is aether, void or quintessence. Aether permeates all matter, but rather than providing a medium through which light travels or the basis for alchemical medicine as with medieval quintessence, aether is more properly conceived as the instantiation of mind in any information-bearing system. That is, even a rock or a thermometer, to borrow from philosopher David Chalmer's panpsychism, can be said to be conscious (or participating in mind / aether) to differing degrees.

Thus the logic of alchemical practice is driven by combination of aether/void with the fire, earth, air and water elementals (perhaps these could be represented as personality traits, specific virtues or general approaches/schools addressing the alchemical praxis of mind). The aim, as above, is soteriological, to transmute phenomenological existence itself to an expanded plane of awareness wherein one can be said to have dissolved into the universal aether.

Zosimos of Panopolis was a late 3rd century AD Gnostic alchemist from Roman Egypt. The Visions of Zosimos wrote:

There are two sciences and two wisdoms, that of the Egyptians and that of the Hebrews, which latter is confirmed by divine justice. The science and wisdom of the most excellent dominate the one and the other. Both originate in olden times. Their origin is without a king, autonomous and immaterial; it is not concerned with material and corruptible bodies, it operates, without submitting to strange influences, supported by prayer and divine grace.

The symbol of chemistry is drawn from the creation by its adepts, who cleanse and save the divine soul bound in the elements, and who free the divine spirit from its mixture with the flesh.

As the sun is, so to speak, a flower of the fire and (simultaneously) the heavenly sun, the right eye of the world, so copper when it blooms—that is when it takes the color of gold, through purification—becomes a terrestrial sun, which is king of the earth, as the sun is king of heaven.

In your world, alchemy of mind is a contemplative/meditative practice where the alchemical vessel is imagined as Zosimos did; a visualised baptismal font where elemental tinctures combine as purifying divine waters of Hellenistic alchemy, transmuting and perfecting the Gnostic initiate into Godhead.

This would also be consistent with Jung's take on Zosimos alchemical treatises as allegories of self-destruction and rebirth, which Antonio D'Alonzo explains a lot better than I:

Jung gives a lot of space to Paracelsus' writings, to the ‘Mercury spirit' and to the symbolism of the tree. But the main figure at the center of Jungian interest is Zosimos of Panopolis (III-IV A.D.). Jung was fascinated by Zosimos' treaties because of their visionary features, the oneiric projections on the objectivity of the matter, perceived by alchemists as intrinsic substantiality and not as a mere result of the dynamics of the unconscious process of individuation. In the Mysterium Coniunctionis , the last work before his death, Jung seems to realize that the dialectic integration of the fourth term – matter – in the divine Trinitarian scheme expresses symbolically the Whole, yet it doesn't realize it concretely and only mentions its possibility. The concretization of the alchemic work is given only by the effective, viz. spiritual, unification between man and cosmos ( Unus Mundus , according to Dornean terminology). At the end Jung, in his constructive approach to alchemy, abandons the idea of overcoming the doctrinal boundary between the reassuring shore of psycho-analytical interpretation and the obscure karstic streams of initiatory operations. Despite his enormous erudition in the subject, he remains a psychologist, miles away from the followers of contemporary neo-gnosis. The task to widen the epistemological horizon of the Jungian research on alchemy has been carried on by two followers of his work, Marie Luise von Franz and Robert Grinell. The former connects the Jungian elaborations on the alchemic coniunction to the theory of synchronicity, referring to the heritage of the classic esoteric doctrine of micro-macrocosm, viz. the anthropo-cosmic dimension of the Whole. Grinell, on the other hand, focuses on the ‘alchemic' re-elaboration of the psychoid processes, defined as indissoluble interactions between spirit and matter; he excludes completely the possibility of a unilateral reading that doesn't take into consideration the coniuctio of the two words.

If you are trying to define the mind in terms of water, air, fire and dirt, you aren't going to find anything better than the Insane Clown Posse videoclip for their song Miracles.

When alchemists used those elements' names to describe things in nature, it was an arbitrary choice. They could as well have used words like Thingamajib, Watchacallit, Wossname and Foobar.

Alchemists' elemental vocabulary is more elaborate than that, though. If you wish to describe the mind, use terms that are appropriate for the mind.

The human mind, like anything else in the universe, is a manifestation of Kia. There is little point in elaborating further what it is made of - rather, it is more useful to discuss where it is, or how and to what it is attuned at a given moment.

Peter J. Carroll elaborates in this in his book Liber Null & Psychonaut, in the section about the Alphabet of Desire.

These are the "elements" of the mind, from an emotional analysis point of view. Notice that this is a very poor analogy - proper explanation would be bigger than Carroll's book itself. 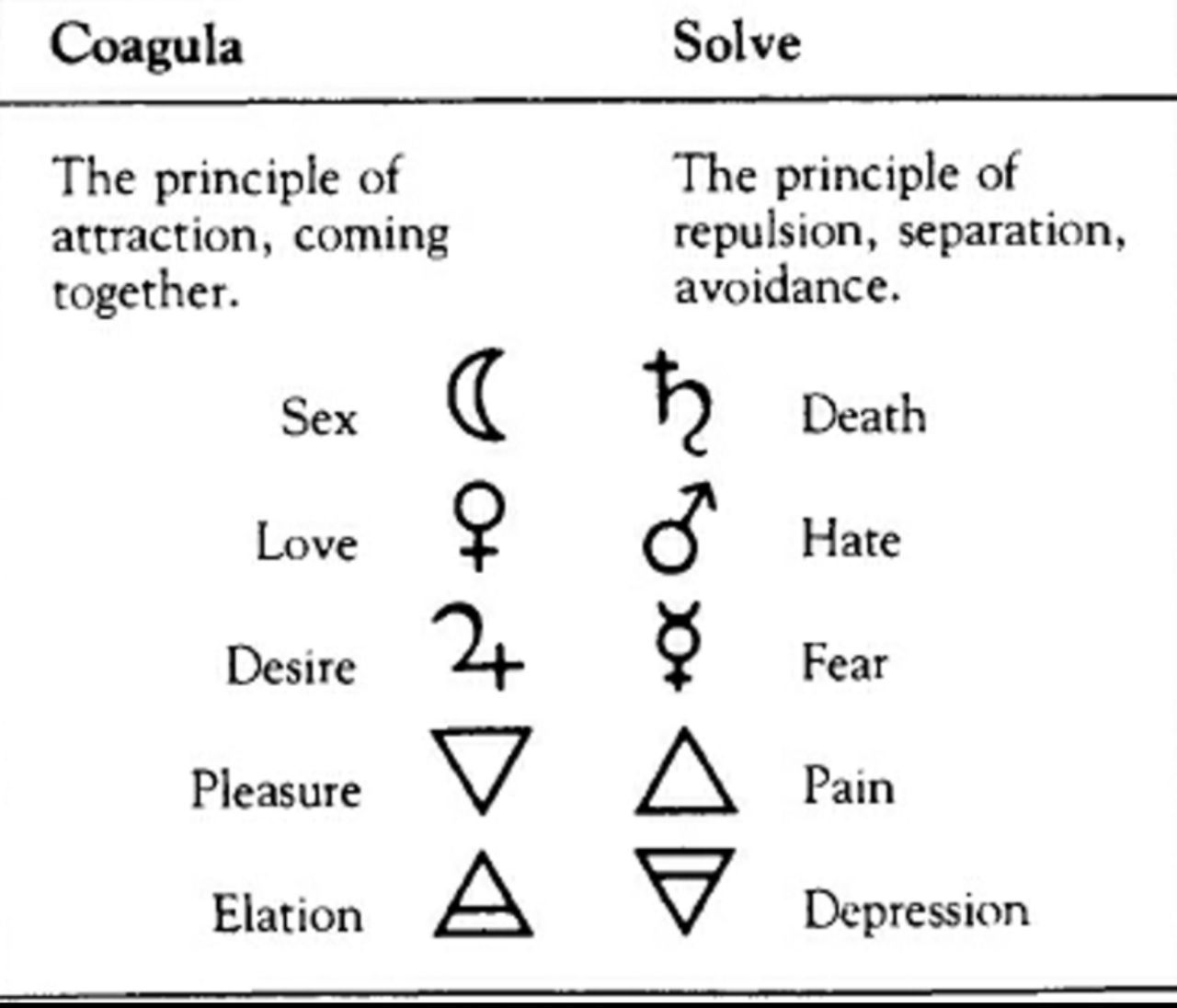 The upper six are the proper "elements". Consider the lower four as "modes".

From these symbols and a load of other alchemist symbols, many emotions, such as joy, releade, anger etc. are conveniently placed in a diagram: 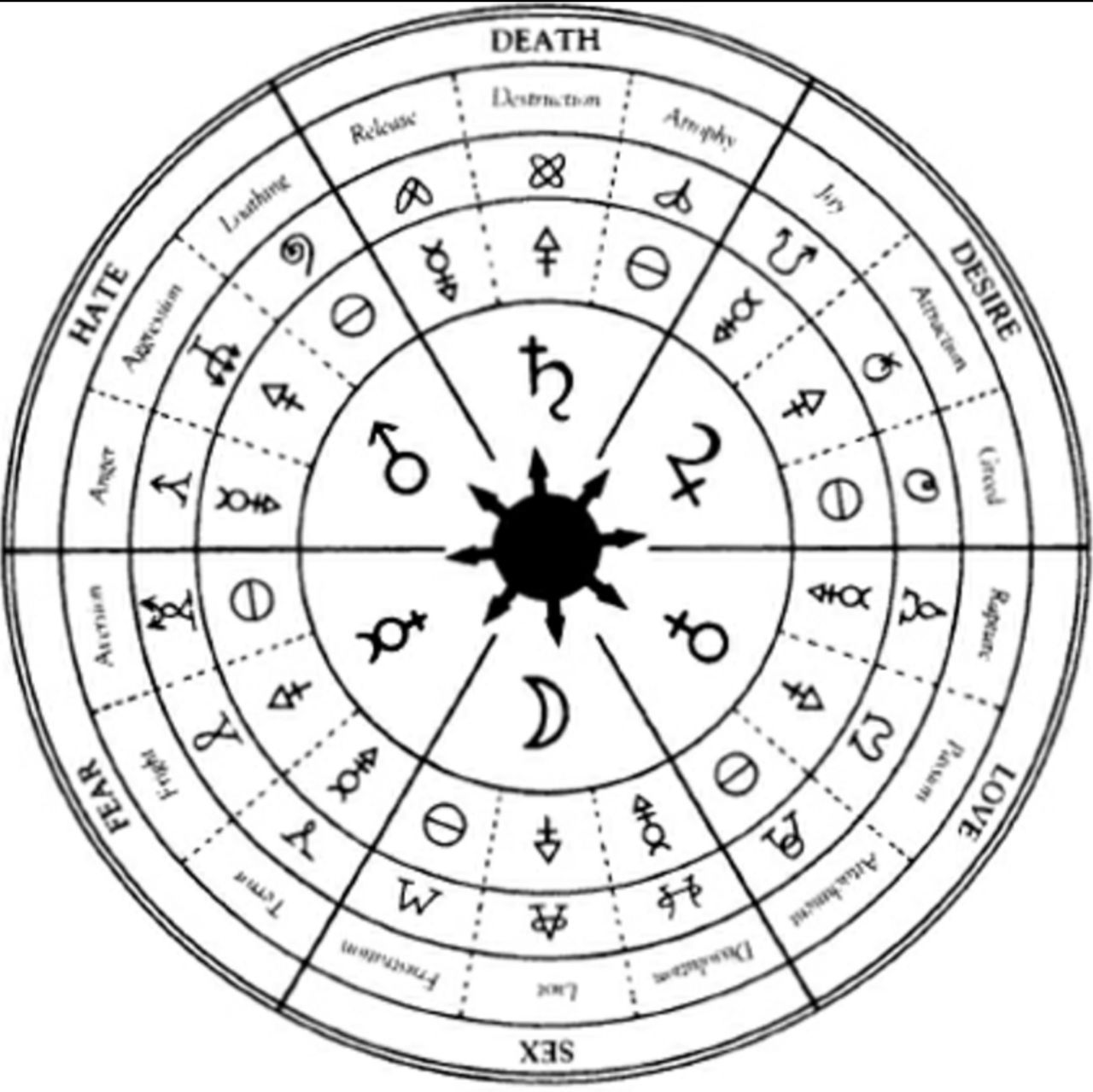 The chaos ball at the center represents pure laughter.

An alchemist/psychonaut's work involves navigating through those emotions for various effects. For further reaeing, also consider Phil Hine's Condensed Chaos for an explanation on how this connects your mind to magic. Again, the proper explanation is as large as the book itself. Have a good read.

A soul may appear to have elements of fire, or elements of metal, or whatnot, but it cannot be broken apart to reveal just the distilled fire or just the refined metal.

As for the best way to associate human decision making to your alchemy system, it depends on the alchemy system, of course. Personally, I find the Wu Xing (the Five Elements) from Chinese philosophy are very effective at breaking down the way humans make decisions and assigning elements to them. However, their system is rather different from the Four Element system which is common in Western alchemy.

By request, I can dig into how I think Wu Xing fits. Wu Xing is a very effective pattern to apply to many things, other than just thought processes. Accordingly it is very abstract. I adapted it to decision making to support a software development team I was part of at work. We had a customer whose needs changed so fluidly that not even agile techniques like Scrum could keep up. It was just the nature of the beast. Rather than try to force our customer to follow our approach, we developed this Wu Xing software development model. We found that the five elements of the Wu Xing are so intuitive that if we used them, our customer started to move in lockstep with us without us forcing them in any way. It just became the natural way to do business.

This is what we came up with: 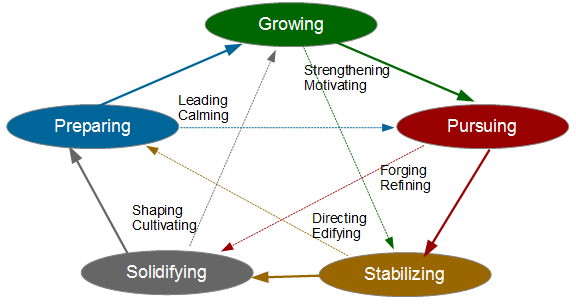 The human thought process naturally flows around the outside circle.

So, by this system, human thought consists of constantly walking around this cycle, developing ideas.

What made the system so fascinating to us is the interacting or "controlling" connections. What happens when two people interact using these patterns? Well it turns out there's some well defined behaviors that reach across the five elements. Water controls fire, fire controls metal, metal controls wood, wood controls earth, and earth controls water. We encouraged the correct interactions with the small words that appear next to each dashed line.

The beautiful pattern that forms is known as the grandfather/son relationship. To demonstrate it, let's start with a "hot" idea that's burning you up, and you have the idea that you need to gain control of it before it destroys you. Accordingly:

What we found is that if you follow this pattern, the result is so easy to follow that people subconsciously tend to align themselves in this grandfater/son pattern. Thus, as far as "human decision making" goes, it should be an awefully useful pattern!

The point of this is explaining a soul with just elements. Am I right? If not pls write quick in the comments.

The Soul is something not 'existing'. You cannot touch nor prove it's there. After all it's just a theorie that we have a soul (Maybe even in your world). The Soul isn't something made of elements of mass like earth, water or air. The only thing, that comes close is Energy.
Pure Energy is also not 'existing'. It's in the element fire (A fire is energy) and lightning (if that's a seperate element from fire).

I hope this helps or brings up new ideas :)

PS: If you explain it like that narrative nonsense, like 'the fire of the soul' gets a context.
PPS: You could also say that magic power is generated by your soul and if you overdue, you lose your mind and memories, or just die, or just loose your soul so you cannot use magic again. Thats up to your fantasy

Not the answer you're looking for? Browse other questions tagged magic alternate-history psychology .

3
How does absorbing a soul make me stronger?
3
How can a magical perspective enhance science?
0
If Earth was returned to a 'natural' state could it break down present human culture?
10
How can you prevent the soul of a dead individual from becoming trapped in the world of the living?
1
How can I prevent soul energy from dissipating?
3
What would prevent a soul transfer into an immortal body from working?
3
How can a soul be unable to resurrect from multiple locations?