How could a person survive and then stay alive, even when they are actively decayed?

So, in my world, a scientist (tries to) invents a machine that will recode your cells in a very particular way, making you immortal. He tests it out on a 13 year old male. It goes....extremely wrong.

At first, he is just a normal kid. But 5 second later, he looks like a 53 year old man. 5 more seconds later, he looks 93 years old. 5 second later again, and he looks like he is actively decaying. His skin flakes of, his eyes bulge and and then recede into his skull, along with his nose, leaving behind a skull like face. But he’s still alive while all of this happens. Finally, he’s nearly all bones and a few scraps of clothing, and, after giving out one final hiss, he collapses. 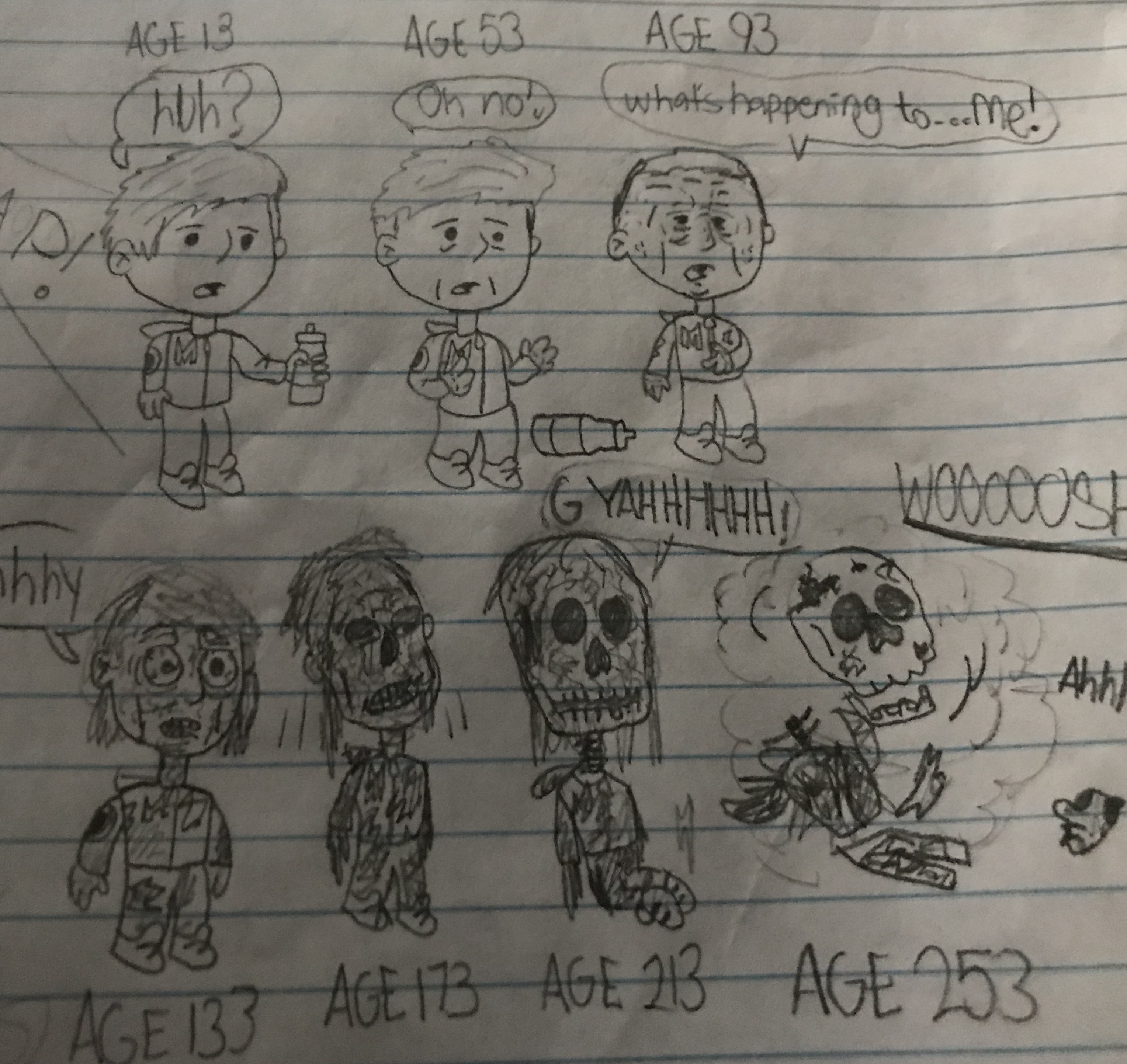 My question is, how could our poor friend survive and then stay alive during his later years, even when he’s actively, and rapidly decaying? Is it possible?

Since the decay is happening within seconds, he can stay alive as long as his brain still works.

In a time long ago, when beheading criminals was an entertaining spectacle to all bystanders, there where assistants who's task it was to catch the cut-off head and point it towards the cut-off body as fast as possible. Many heads where still alive and concious enough to distort into horrified grimaces upon seeing their own bodies.

The difference to your character is that those heads where well-supplied with oxygen and most certainly adrenalin and did not decay on a cellular level.

To achieve the desired effect, the drug cannot simply kill cells. It would have to start a violent chemical reaction that removed water from the body at an incredible speed. To keep the body alive as long as possible, the reaction would have to start at the outmost layer of skin and work its way deeper into the body. The skull could protect the brain for a limited time, but the eyes would be gone rather soon. Since you need muscles to speak, his last seconds would be rather silent, too.

Not much you can do against actual decay, but there might be a workaround:

Don't know if this helps too much, but I've heard a story about a buddhist monk who was thought to have been in a state of deep meditation for more than 100 years. He's body was mummified but his mind was supposed to be still alive.

His skin would have become as dry as jerky, and the muscles would have atrophied to the bones.Same would happen to the internal organs as well, with only the slightest of activity.

But the meat wouldn't just 'turn to dust'. Another example are the supposed bodies of saints, which defy decomposition, keeping a jerky-like state for hundreds of years or actual mummies, where the skin and meat is still 'meaty'.

What you describe is already magic, there is no scientific process by which it will happen that fast.

Since it's already magic, have him magically stay alive :)

Well this wouldn't fit your (great) diagram, but if the effects of the aging only concern his external tissue and do not affect his internal organs, then, given my limited understanding of human anatomy, he wouldn't experience organ failure and he'd continue living until that internal tissue became compromised.

His only hope his the scientist has developed a reverse function already.

Throws a switch, and instantly reverses the process.

Otherwise the person is decaying too fast to save, as he is dead in less than 30 seconds.

You couldn't even transfuse all of his/her blood that fast, presuming that even helped at all. Which presumably it wouldn't as the scientist has damaged every cell in your body.

Cold would slow down the cells, but in order to slow them down enough to matter the temperature would kill you. At absolute zero, it is theorized that atoms would stop moving, or move so slow as to appear to be stopped.

The person would have to be held in stasis, some how. In star trek universe you could use a transport buffer, and fix the problem before beaming them back. Only the patterns degrade over time so you still have to act quickly.

35
How could a species survive on just luring in and eating humans?
12
How do lever controlled mechanic structures in dungeons work and how feasible they are?
8
What are some not-so-obvious effects a person might experience if they were still conscious and active, but didn't have a heartbeat? [RE: Vampires]
4
How could physical fitness and arcane magic be linked to each other if they operate differently?
8
Aliens selectively breed humans to be bigger. How big could they get and still look human?
12
How could a possessed body begin to rot and decay while it is still alive?
26
What are the physical effects of a person living their entire life underground, and how would it affect them if they ever came up?
5
How could a living biological sword survive a spaceship crash and then isolation for millennia?