When one thinks of a shelled cephalopod, odds are high that the first thing to come to mind are the ammonites. They were one of evolution's success stories, thriving from 400 to 66 million years ago. Why they became extinct is still a subject of much debate, but some theories have been considered:

The last one may be the least likely, as it doesn't explain why the nautilus is the only shelled cephalopod left on Earth, but ocean acidification IS an issue that many of today's bivalves face, as their shells are made of calcium carbonate. As the oceans become more and more acidic, their shells get eaten and thinned out.

There is another aspect to the equation of this question. So far, bone is an organic material unique to the majority of only one phylum, the chordates. But what is bone made of?

Bone is not uniformly solid, but consists of a flexible matrix (about 30%) and bound minerals (about 70%) which are intricately woven and endlessly remodeled by a group of specialized bone cells. Their unique composition and design allows bones to be relatively hard and strong, while remaining lightweight.

Bone matrix is 90 to 95% composed of elastic collagen fibers, also known as ossein, and the remainder is ground substance. The elasticity of collagen improves fracture resistance. The matrix is hardened by the binding of inorganic mineral salt calcium phosphate in a chemical arrangement known as calcium hydroxylapatite. It is the bone mineralization that give bones rigidity.

Bone is actively constructed and remodeled throughout life by special bone cells known as osteoblasts and osteoclasts. Within any single bone, the tissue is woven into two main patterns, known cortical and cancellous bone, and each with different appearance and characteristics.

Note that calcium carbonate is not mentioned in this blockquote, so the overall question is: In an alternate Earth where a mass extinction involves ocean acidification, could a mollusk--be it a cephalopod or bivalve--develop a bony shell independently from chordates?

could a mollusk--be it a cephalopod or bivalve--develop a bony shell independently from chordates?

Here I understand "bone" more generally - if the only bone is chordate bone then by definition nonchordates can't have it. But if bone means an organic matrix hardened by calcium phosphate mineralization, molluscs could definitely have that.

Crustaceans have it. They use it for their jaws and teeth.

Crustaceans, like most mineralized invertebrates, adopted calcium carbonate mineralization for bulk skeleton reinforcement. Here, we show that a major part of the crustacean class Malacostraca (which includes lobsters, crayfishes, prawns and shrimps) shifted toward the formation of calcium phosphate as the main mineral at specified locations of the mandibular teeth. In these structures, calcium phosphate is not merely co-precipitated with the bulk calcium carbonate but rather creates specialized structures in which a layer of calcium phosphate, frequently in the form of crystalline fluorapatite, is mounted over a calcareous “jaw”.

Molluscs have chitin and like the crustaceans, they also calcify it for strength and hardness. Like the curstaceans, this converges on bone. 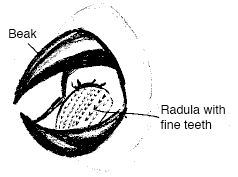 Novel Genes, Ancient Genes, and Gene Co-Option Contributed to the Genetic Basis of the Radula, a Molluscan Innovation

Coordinated cyclical secretion of tooth matrix by groups of odontoblasts defines size and shape of the developing teeth (Kerth 1973; Mackenstedt and Märkel 1987). The tooth matrix mainly consists of densely packed chitin fibers and so far unexplored nonchitinous macromolecules (Peters 1972; Sone et al. 2007). Mineralizing cells of the superior epithelium integrate organic and inorganic compounds into the matrix to harden and, in some cases, mineralize the teeth as they migrate toward the buccal cavity

This mineralization is also calcium phosphates and carbonates. It is not "bone" but I am interested to see that the cells which produce it are called "odontoblasts" - the same name as the cells which make our teeth. There is no reason why an organism which uses mineralized chitin for beak and tongue could not use the same material for a shell.

Can they? Technically, yes. What you're describing is convergent evolution. When two different groups of creatures each arrive at a similar structure from ancestors that didn't have that trait.

Speculating on what would cause a mollusk to develop bone like shells is probably very broad. But there are many examples of convergent evolution.

Take for example the Hummingbird hawk moth. At a glance you could easily mistake it for a humming bird. However it is full fledged moth, bug-type and all. The similar structure of rapid wing flapping and long proboscis for getting nectar are the convergent parts of this evolutionary path (matching up against the actual bird-like humming bird).

Not the answer you're looking for? Browse other questions tagged science-based reality-check biology evolution alternate-earth or ask your own question.

31
Can two civilizations on nearby stars develop independently but be at a similar technological level?
5
Metropolitan Mollusks and Seagrass Serengetis
26
Could mollusks become extremely large?
2
Can I engineer a lighter bone structure?
6
Can an animal develop a facial disk through muscle and bone alone?
4
Could Sharks Survive a Longer PETM?
7
A stronger replacement for calcium carbonate in super-strong scales?
3
Can silver affect blood or bone color?