Reasonable explanation of why Hogwarts students/teachers are massive smokers [closed]

I would like to design a satirical RPG (a parody, if you like it more) for my team in the Harry Potter world, where the vast majority of the students and teachers are very heavy (non-weed) smokers, and the students are trying to hide their smoking from the teachers.

It is not necessary to strictly remain in the canonical or any semi-canonical universe, still, I am unable to come up with a plausible explanation how this setting could be realistically achieved. Of course, lots of us smoked secretly in our younghoods, but how could almost an entire school destroy their lungs this aggressively?

You remember the magic jelly beans that were so popular with the kids? Yes, "Bertie Bott's Every Flavour Beans - a risk with every mouthful."

Well, Bertie Bott figured out how to apply this flavourful magic to even more addictive products ... with an entirely different kind of risk ... it's become a serious blight on the whole magic world.

The magic regulators were rather too slow to act. By the time they finally got around to banning Bott from marketing this stuff to kids, it was rather too late for the current generation.

This is a very silly question. :'-) I will do my best. I'm looking at a few articles about why people start smoking in general.

If it's a society-wide thing were most wizarding teenagers in general smoke, you could plausibly suggest that it's a cultural phenomenon related to a supposed medical benefit, like in the United States in the 1940s and early '50s. Considering that the wizarding world doesn't necessarily have a big grip on basic science, including medical science, that might make sense. It might also be possible within the wizarding world that the health risks are mitigated by other factors, making things like nicotine's anti-anxiety effects outweigh things like cancers. In wizarding schools where Muggle-born students come in and know the effects of smoking, it could be acts of rebellion and liberation from the new knowledge that any downsides of tobacco don't need to affect them.

As for why students would then need to hide smoking from teachers, though, maybe it's a new ban by a Muggle-born headmaster, and even the teachers have to start hiding their smoking. It might help if there's just a single person responsible, because then it would make sense that numbers are stacked against the anti-smoking population, like you want.

If it's just that a current school population smokes, then it would have to have a more singular locus of influence. Maybe a previous student who smoked left the school, or even died in some horrible tragedy, and in honor of them more students outside of that person's immediate friend group (who may already be heavy smokers) obtain cigarettes and end up getting addicted.

It used to be that way. 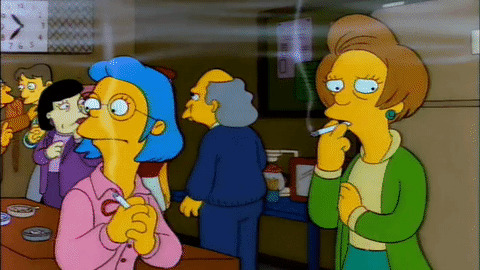 I could not find the image of Bart opening the door of the teachers lounge and facing a wall of smoke - he enters crawling along the floor. Teachers used to smoke!. They would duck in for a cig between classes. You could smell the teachers lounge all around the school. It was as smoky as a bar. I remember the smoke smell coming off my math teacher as he walked into the room.

Things have changed a lot in the US. Now there is no smoking anywhere in schools or in bars. But the idea of everyone a chain smoker is not that wacky because it was that way. Everyone used to smoke everywhere. Doctors would smoke in the hospital. People would smoke on airplanes.

If you want to play for humor, the humor is in that teachers are supposed to be role models and kids are not supposed to smoke. I worry the joke will be lost on millennials who don't remember smoke.